Enrollment numbers at Catholic schools across the U.S. rose during COVID-19 pandemic 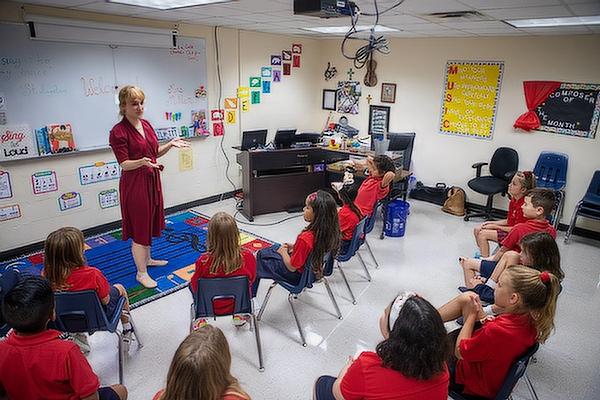 Enrollment numbers at Catholic schools across the U.S. continue to hold steady following a bump at the onset of the COVID-19 pandemic. After data released last summer by the National Catholic Educational Association showed a 3.8% nationwide increase in enrollment for Catholic elementary and secondary schools during the 2021-2022 school year, numbers going into the 2022-2023 year continued to look strong.

"This year we had stable enrollment, and to me that means schools already did a great job of retaining students and families," Annie Smith, NCEA vice president of research and data, told OSV News.

Countering a 6.4% enrollment decline from the previous school year, the 2021-2022 enrollment spike in Catholic schools was the first in two decades, and the largest ever recorded by the Leesburg, Virginia-based NCEA, which represents some 140,000 educators serving 1.6 million students.

"People have experienced their local Catholic schools, and they're staying."

In the Archdiocese of Chicago, Greg Richmond, superintendent of schools, said that their numbers had stayed steady for the first half of the 2022-2023 school year -- a feat made even more impressive by the fact that “the annual number of births in our archdiocese has been plummeting," he said.

According to Richmond, annual births within the Chicago archdiocese declined from 90,000 to 65,000 over the last 15 years. "So there are a lot fewer kids than there used to be, but our numbers went up and stayed level," he said.

In the Archdiocese of Los Angeles, Catholic schools marked a 4.2% uptick in enrollment last year, jumping from almost 64,700 to just under 67,500, according to senior director and superintendent Paul Escala.

Escala told OSV News the gain -- their first in 27 years -- was realized while complying with California's stringent COVID prevention protocols.

"We advocated and worked closely with public health partners to allow for reopening in person, with masking, distancing, desk shields and no visitors," he said. "It was a tremendous challenge."

Those efforts have paid off by attracting new families to Catholic education, said Escala.

Smith attributed the growth and subsequent steadiness to "a combination of things," including Catholic schools' ability to "pivot in meeting the needs of students" throughout the various phases of COVID restrictions.

In the pandemic's initial days, she said, classrooms "may have closed on a Friday, but our Catholic schools had their instruction back up by Monday or Tuesday."

Whether organizing remote or hybrid learning plans to comply with public health guidelines, the nation's Catholic schools benefited from "a flexibility and agility you often don't see in the public system," Richmond told OSV News.

He said the Archdiocese of Chicago's schools functioned remotely during the spring of 2020 term as educators "pushed (themselves) to the limit" in order to reopen in the fall of 2021. When they did, enrollment had risen by 3,000 students (4.5%) to a total of approximately 66,000.

"We were free from the extremes of politics that you often see in many public systems," Richmond said, while diocesan educational leaders "learned from each other through lots of conversations" with their peers across the country.

Concerned about "lack of instruction during lockdowns" in other schools, parents "saw Catholic schools as an opportunity for academics and social, faith-filled advancement during a very difficult time," he said.

Richmond agreed the push to resume in-person learning "created an invitation for people to check us out and learn about Catholic schools. It shone a light on us."

But getting kids back to the classroom was not the only driver for the enrollment bump, he said.

"People liked what they saw in terms of academics, values and reliability," even if they were not Catholic or practicing any faith, said Richmond.

The nation's Catholic schools have "really focused on the whole child, not only academic learning," addressing "social skills and mental health" while supporting families, said Smith. "They went above and beyond during COVID, asking, 'Do you need food, a tuition break, someone to talk to?'"

Escala said he is working closely with philanthropic partners to ensure that assistance continues.

"Our mission orientation is to serve the poor, and our preference will always be for those who have less," he said. "That's been a hallmark of Catholic education from the beginning, and it remains so."

Smith said that Catholic schools used to be a "best-kept secret," but that phrase no longer applies.

"Now, they're not a secret," she said. "People have experienced their local Catholic schools, and they're staying."