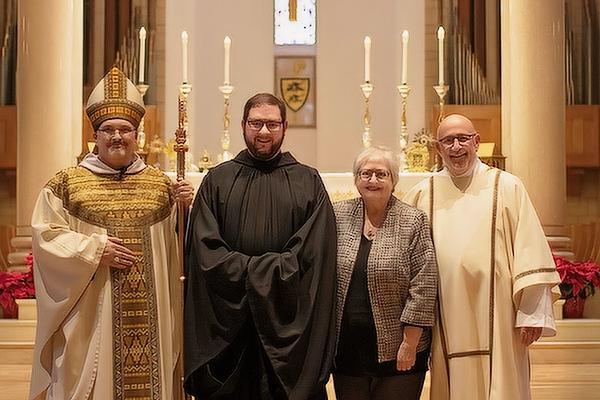 He had starts and stops on his journey to religious life, but Brother Gabriel Jannise, OSB, said he has finally found peace after making his solemn profession as a Benedictine monk Jan. 4 at Subiaco Abbey.

Born Samuel Jannise to Deacon John and Dorothy Jannise in Groves, Texas, outside of Port Arthur, he felt the call to be a priest in the Diocese of Beaumont and entered Holy Trinity Seminary in Irving, Texas, after he graduated high school. After three years, he dropped out.

“I was totally unready at that point. I had some growing up to do and just wasn't ready,” Brother Gabriel, 45, said. “I discovered I was kind of introverted for diocesan life, so I went out and got a job and the printing industry was happy there.”

Seven years later, he thought again about transitioning into the life of a religious. He completed an online survey and he was a 99-percent match to Benedictines. He checked a box asking if he wanted further information on the order and received an invitation from Subiaco’s formation director for a come and see retreat.

"My goal is to get to heaven and bring as many people as I can with me."

“I came and I saw. I was really amazed with the life here, but I thought, ‘Oh, absolutely not,” he said. “These monks are crazy.”

He went back to work in printing for 13 years, but the call did not go away.

“I kind of always felt something nagging in my heart,” he said. “The cutoff period to apply in these places is usually around 45, and I was pushing 40 at the time. So, I thought, ‘It’s now or never. Let me give it another shot.”

He visited a Chicago abbey but stopped at Subiaco again on his way home.

“It kind of filled the void in my life, and I thought this is something I should really seriously consider.”

He applied, was accepted and given an entrance date of Sept. 7, 2018.  A year later, he made simple vows and took the name Gabriel of the Annunciation.

“I was really drawn to something to honor Our Lady, and Mary is not a very masculine name, so who better to honor Mary than the angel who had the singular honor to address her and announce the lord was coming and God had chosen her,” he said.

After taking his simple vows, he was offered nursing jobs in the abbey health center.

“I said, ‘Absolutely not.’ I don't like touching people and bodily fluids make me sick,” he said. I was direly opposed to it. But I said let me consider it, and I prayed about it. I said, ‘God, if that's what you want me to do. I'll give it a try.’”

He found his niche.

“We had a couple of monks that I was really close to pass away, and I had the honor of being with them through their most difficult times, their trials,” he said. “I really came to love serving my brothers in this way. I thought if I can bring healing and comfort to my brothers, bingo, that’s where I want to be.”

Since then, he has become a certified nursing assistant and is finishing his final year to earn a bachelor’s degree in nursing at Arkansas Tech University.

“I’m feeling great, kind of like I have a peace about me now,” he said. “I don't know if it's just that I no longer have to discern or if it's something that the Holy Spirit has given me, but I'm feeling pretty good. Feeling great about my decision and supported by the community.”

While he is content with his status as a brother, he said he has thought about going back to seminary to studying for the priesthood.

“I’m thinking about it, but that's going to be a private discussion between me and the abbot,” he said. “I’m not opposed to it. I’m open to doing God's will. … My goal is to get to heaven and bring as many people as I can with me. We'll see where it goes, but I'm excited to be here starting a new chapter.”