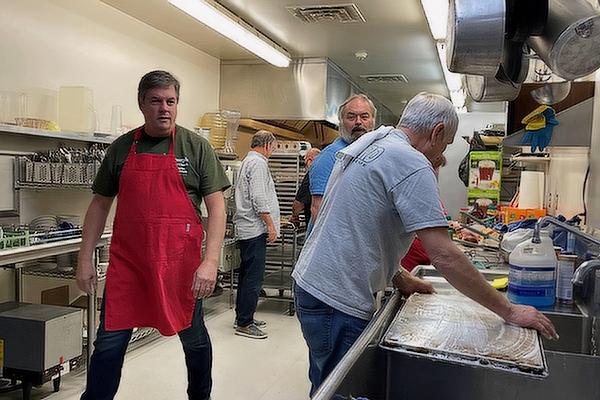 For 20 years, Mark Bausom has been the man behind the menu for about 40 Search weekends, the diocesan youth retreat that has helped teenagers grow in their relationships with Christ.

Just like Jesus’ example of feeding the multitudes and calling followers, Bausom, a parishioner at St. Joseph Church in Conway, not only fed approximately 60 teenagers and about 28 Search team members each retreat but recruited his friends to the mission of cooking and serving food: St. Joseph parishioners Jerry Hiegel, who has served in the kitchen at Search for 19 years; Ron Gatto, 16 years; Raymond Gunther, 10 years; Kyle Martin, eight years; and Vince Maniace, a parishioner at Christ the King Church in Little Rock, 12 years.

After many years of service, Bausom and the rest of the men are hanging up their aprons, leaving the Search kitchen. They served their last Search retreat Dec. 2-4.

“It’s getting harder and harder to do. We've just been doing it for 20 years, and somebody new can take over and enjoy the fruits of that labor,” Bausom, 68, said.

“It’s just been such a blessing to be there and witness the transformation of the kids coming in. You can just see it happening — they’re getting it. The Lord is moving in their lives,” Bausom said.

Liz Tingquist, diocesan director of youth and campus ministry, recognized the men during their final Search weekend. They were each recognized for their service, received gift cards, personal notes from Bishop Anthony B. Taylor and a standing ovation from the retreat participants and team. Tinquist said the men saved money on caterers, keeping costs down for teens attending the retreat.

“They’re just men of God. And they show that through their servants' hearts,” Tingquist said. “They’re very friendly and wonderful with the teens that come through the program, spending their days not only prepping and cooking, but praying for all of the searchers.”

“She was telling us what a great weekend it was and how much she enjoyed it, but the food was a little ‘eh,’” Bausom said. “I was cooking for Cursillo at the time, I had been doing that for 16 years.”

The former youth director John Hall asked Bausom to help. After that first retreat, he was hooked. He left his cooking gig at Cursillo, an adult retreat similar to Search, and began recruiting others. He created the menu still used today: Friday night, pizza and chips and dip for the Search team members; Saturday morning, pancakes, link sausage and fruit; Saturday lunch, chicken and rice casserole (a recipe carried over from Cursillo) with green beans and a salad; Saturday dinner, spaghetti meat sauce, cheesy garlic bread, salad and brownies with a scoop of ice cream; Sunday morning, scrambled eggs, sausage and biscuits and gravy. Bausom shops at several Little Rock stores ahead of the retreat to gather the ingredients. Daughter Susan Bausom helped him shop and cook on the weekends for about 10 years.

Another of Bausom’s daughters, Veronica Martin, 30, has also helped the previous eight years. Martin said since having two children, she helps her dad shop and cook on Fridays, while her husband Kyle Martin, cooks on Saturdays and Sundays.

“I was mainly the shopper, the organizer, once we got it all there. It was three carloads just about by the time we got everything there. I was the pancake flipper,” she said.

And when the retreat starts, it’s all hands on deck.

“We’re all in the same kitchen. Everyone pitches in to cut up celery or cut up chicken or stir the pot when you go by,” Hiegel, 61, said. “The majority of us are from Conway; we know each other really well.”

For Gatto, cooking for Search has combined his faith and Italian heritage. The red sauce for the Saturday spaghetti is his Grandma Gatto’s family recipe, which adds a few unconventional ingredients like cinnamon and brown sugar.

“We know the red sauce is done when the soup spoon stands up,” Gatto, 60, said with a laugh, noting its thick texture.

Raymond Gunther, whose son, Brother Travis Gunther, SDB, started Search’s adoration team, began washing dishes with the kitchen crew, moving up to food prep. He said the camaraderie of the men made this ministry special.

“I know we gave back to Christ, don't get me wrong. But if you put that group together, we’re going to have fun. We all knew what the mission was — food brings people in,” Gunther, 69, said.

One of the best stories to come out of the kitchen was a mishap making pancakes.

“Ron Gatto was getting the pancake batter made and he turned the industrial mixer on and it was set to high. He ended up looking like the Pillsbury Dough Boy,” Maniace, 62, laughed.

Throughout the years, it’s become a family affair. Many of the men’s children attended Search retreats and volunteered in leadership roles.

“I feel a big part of spiritual life is community. Not only connected family members, but all the men who helped my dad throughout the years, I consider them family through the body of Christ.”

Kyle Martin, 35, entered the fold about eight years ago.

“The guys always called me “Frenchie.” When I started there, Veronica said, ‘This my fiance,’ and they said ‘Oh, are you French?’ Hearing my name Frenchie get called, it’s just another one of those nicknames I can cherish the rest of my life. It was ‘Frenchie this, Frenchie that.'”

But the men are well aware they have been cooking up more than just food throughout the years — they’ve contributed to the faith formation of the teenagers.

“It’s just been such a blessing to be there and witness the transformation of the kids coming in. You can just see it happening — they’re getting it. The Lord is moving in their lives,” Bausom said. “Their whole personalities or personas just change a little bit. You can see them becoming more uplifted. We’re just feeding them physically, but spiritual work is going on elsewhere.”

Hiegel said it's been inspiring to watch teenagers having their first “eye-opening” experience with faith and knowing how many future priests attended Search.

“It’s very fulfilling to hear some of the young people that have grown in their faith because of Search,” Hiegel said. “Even if we’re not directly involved in the program, we can take this one section of food away from Liz or the team without having to worry about it, they can devote more time to that formation.”

All of the men have agreed to step down from the kitchen crew together, as Gunther pointed out, “One wouldn’t go without the other. We were a group, that’s all.”

But it’s not the last time they’ll cook together, as most continue or will volunteer cooking meals at St. Joseph, like pancake breakfasts and Lenten suppers. Tingquist said Tom and Gretel Smith, parishioners at St. Jude Church in Jacksonville, shadowed the men and will take over kitchen duties. They are seeking volunteers to assist.