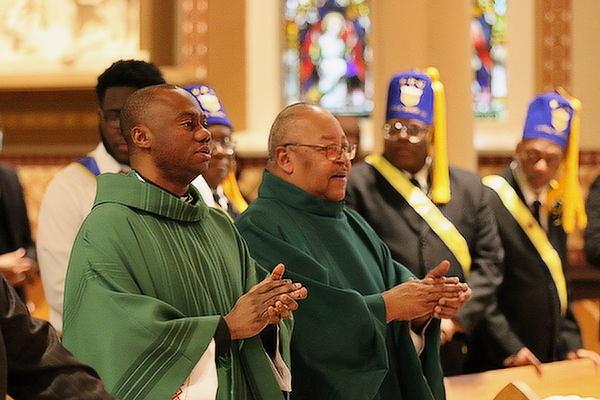 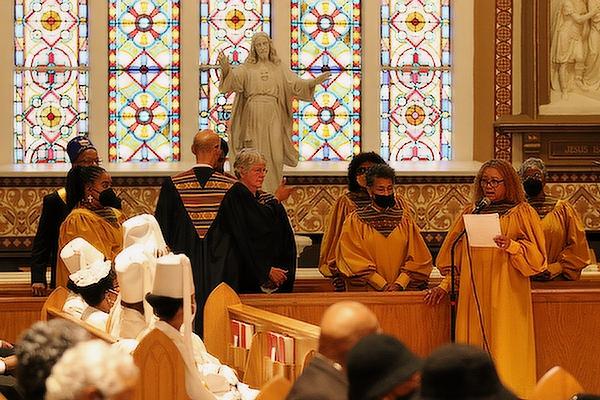 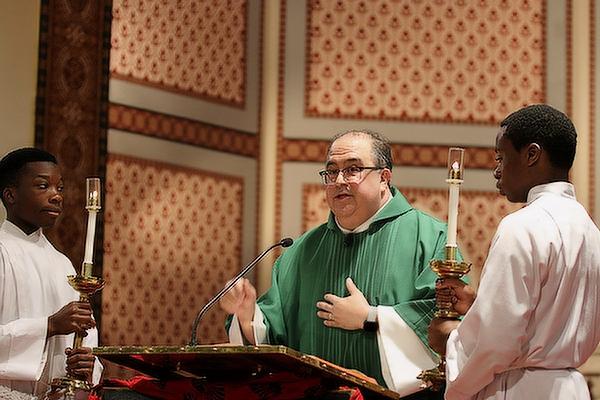 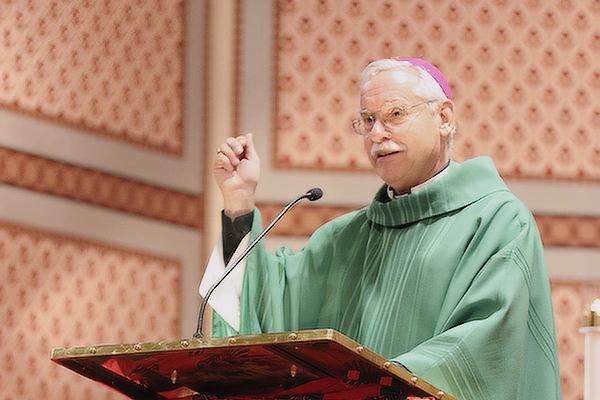 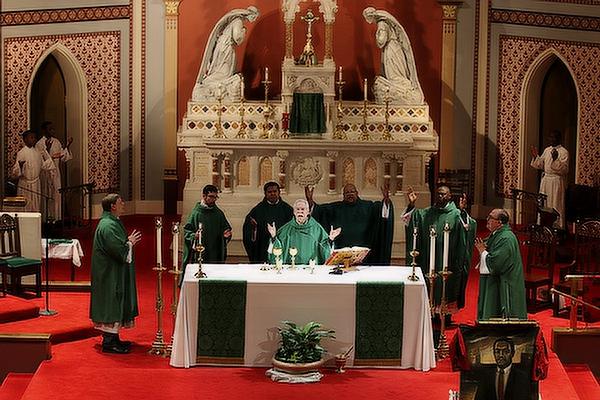 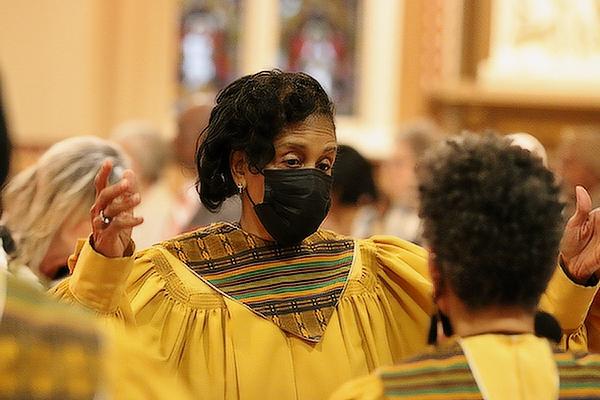 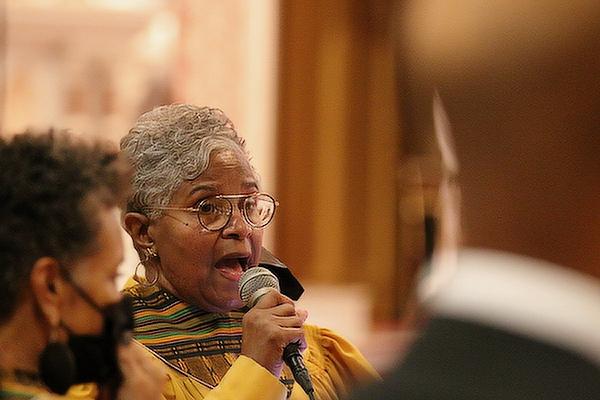 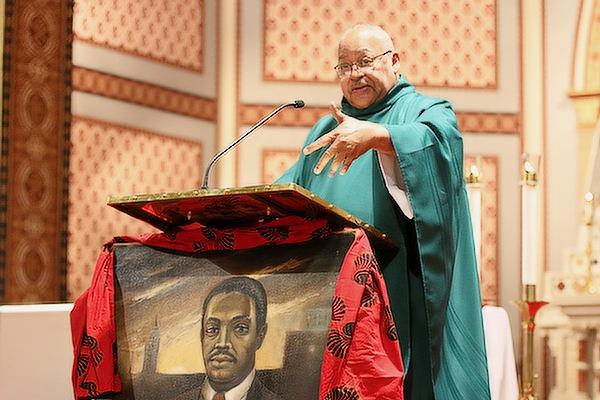 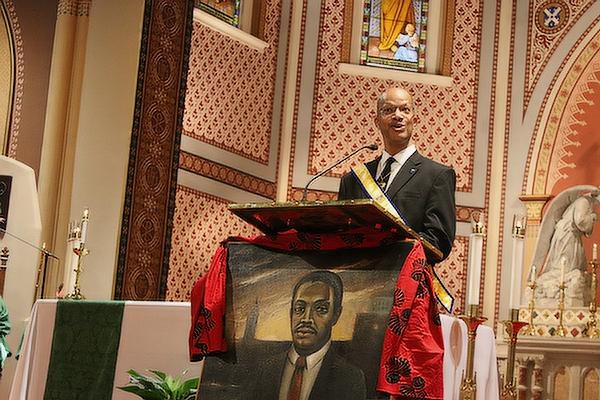 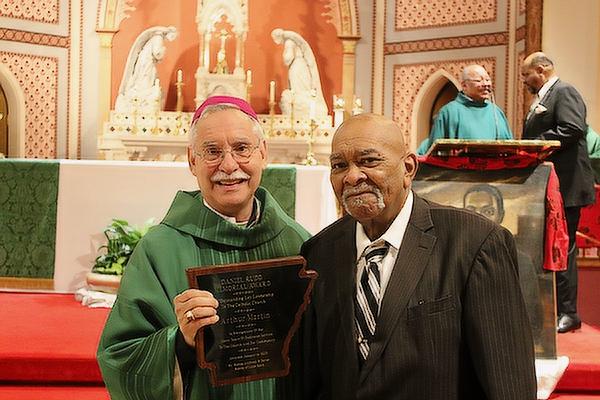 The sanctuary of the Cathedral of St. Andrew was filled with peace and promise Saturday, Jan. 14 during the 36th Annual Dr. Martin Luther King Jr. Memorial Mass sponsored by the Diocesan Council for Black Catholics.

Father Harvey decorated the lectern with a portrait of Dr. King that was painted by retired diocesan priest Father Edwin Graves, 82.

During the celebration, Arthur Martin, 74, a lifelong member of St. Raphael Church in Pine Bluff, was presented the Daniel Rudd Award for his impact on his parish and community. He was recognized for maintaining St. Peter School from 1989 to 2009, three years of work at St. Joseph Church, also in Pine Bluff, and his continued maintenance and service as a lector and usher at St. Raphael Church.

“He strives to bridge social gaps that permeate this society. He uses his gifts to benefit others in the Church and community.”

“He has given his service to God's work and his family, community and church,” Verdell Bunting Jr., president of the DCBC and member of St. Bartholomew Church in Little Rock, said as he presented Martin the award. “He drove the school van to pick up and drop off children whose parents could not transport them to and from school. He often mentored students on their behavior, using his faith as a model and let them know the blessings God has bestowed upon them. He transported church members to church events in other states, such as Louisiana, Michigan and Washington, D.C., for the National Black Catholic Conference. He is known and beloved by people who attend services at St Raphael.

“He strives to bridge social gaps that permeate this society. He uses his gifts to benefit others in the Church and community.”

Martin’s parents were two of the original founders of St. Raphael Parish in Jefferson County.

On April 14, 1958, as a fifth grader, Martin watched as fire devastated the original building. St. Raphael School wouldn’t reopen after the fire, and the children went to school at St. Peter. Mass was held in the dairy until a small church was rebuilt and dedicated in 1960.

“This is really humbling,” Martin said about being recognized with the award. “The Church is my life. It’s just the way I was raised. I was raised there, and that's just my life.”

He said that Pine Bluff is one of the strongholds of Black Catholic Arkansas and that he would like to see more young people engaging the faith.

“When I was a kid, it was a very large community. Now, it’s very few.”

Antionette Akins, who is the resident historian of St. Peter and St. Raphael, said, “He's so worthy of getting it. To really be honest, it's long overdue because he takes care of everything around the church. He’s served. I really can't say enough.”

In his homily, Bishop Taylor shared an epiphany he had while serving as a transitional deacon in Kenya in 1979. He found he had more in common with an African-American who was there from Holly Springs, Miss., than the Europeans who were there.

“He had a lot more in common with me than he did with people who looked more like him but were completely different culturally. And I had more in common with him than with the Italian and Spanish priests I was with. By the time I met him, he was dealing with the same reality. We were both Americans.”

In our society, the bishop said, “we Catholics expect people of different ethnicities to be able to worship together routinely without it being a big deal.  We do not always live up to the best that is in us, but we do know that Jesus expects us to include everyone because we are a single family of believers. All are welcome!”

Since 1985, the Diocesan Council for Black Catholics has given the memorial Daniel Rudd Award to Black Catholics in Arkansas whose leadership impacts their parish and community. Rudd, who lived in Arkansas from 1912 to 1932, owned the American Catholic Tribune, a Black weekly newspaper, and founded the National Black Catholic Congress.