Fredi Knighten, assistant for the Cincinnati Bengals, was altar boy at St. Bartholomew 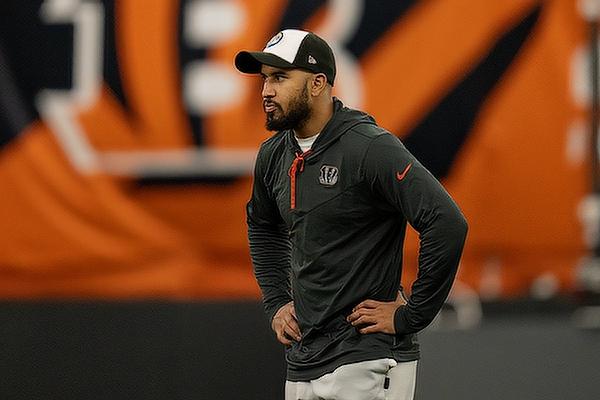 National Football League fandom is a many-splendored thing. Unlike college football, which tends to galvanize the majority of fans in a given geographic area, NFL teams tend to cultivate a more national following. Thus in Arkansas, while Dallas and New Orleans tend to attract the most followers, it’s not uncommon to find a sprinkling of fans for teams from coast to coast.

Even so, it’s safe to say the Cincinnati Bengals are a minority rooting interest in the Natural State both for reasons of proximity and for the fact that until very recently there wasn’t much to cheer for, especially in the postseason.

Now, not only are the Bengals chasing their second straight Super Bowl berth this year, led by former SEC quarterback Joe Burrow of LSU fame, but there’s also a familiar Arkansas face contributing to the team’s success, and a Catholic one at that.

“It’s cool that a lot of younger guys are getting their chance to be NFL head coaches and put their spin on the game,” he said. “I think it does give a little motivation for younger guys to be able to say, ‘You know what? If I do a good job and people see my work and they say good things about me and how I carry myself then maybe I’ll be afforded an opportunity to do that.’"

“We were playing the Cowboys, and there’s a former player who I coached at U-Mass who lived in Dallas. We were just hanging out and we were talking. He was like, ‘Man, this is crazy. Like, 5-year-old Fredi would be losing his mind right now.’ I was like, ‘Yeah, I guess you’re right.’”

Knighten, a former altar boy in Little Rock’s St. Bartholomew Church, is in his first year of coaching with the Cincinnati franchise. The 28-year-old is well remembered by Arkansas football fans from his playing days; as a standout quarterback with high school powerhouse Pulaski Academy in Little Rock, Knighten led the Bruins to an undefeated championship season in 2011. He tossed 323 yards and three touchdowns in the 63-28 title game laugher against Malvern.

From there, he signed on to play for Arkansas State University in Jonesboro, a period marked by a chaotic revolving door of coaches and frustrating lack of playing time.

His college career took a Hollywood turn in the 2014 Go Daddy Bowl, when the sophomore was called off the bench against Ball State. Knighten made the most of the opportunity, posting 212 total yards, orchestrating a 55-yard winning drive that scored with 32 seconds remaining and landing MVP honors. He ended his collegiate career with nearly 5,400 passing yards, 46 touchdowns and 18 interceptions and also rushed for more than 1,600 yards, scoring another 21 touchdowns.

Coaching, however, never entered his mind until his playing days had run their course.

“I was at home working a landscaping job back in Little Rock, and it was terrible,” he said. “I was like, whatever I’m going to do, this is not it.

“I was able to link up with my college offensive coordinator who offered me a volunteer spot and I did that for a year. I was like, OK this is stuff I like doing.”

College football coaching is a nomadic existence and the more successful you are, the more you move as better opportunities present themselves. Knighten’s journey was no different given the success he’s enjoyed at every stop.

Following a year at Maryland, he coached at Florida State, the University of Massachusetts and Utah State, and at each stop he was part of dramatic team turnarounds on offense. But his opportunity in the NFL was nothing short of serendipitous.

“It happened in the strangest way possible,” he said. “Our starting quarterback at Utah State tore his ACL in the bowl game, and we had six graduating receivers and no one to throw to them at pro day. I was tasked to throw to the guys on two days’ notice. In my mind I was like, please let me not screw these dudes out of some money.

“So, we’re in the pro day deal and I’m like, ‘Hey, look. Whatever you need me to do, man, I’m here to help.’ I didn’t necessarily throw great, but I guess I left a little bit of an impression.”

The Bengals coaching staff took note and invited Knighten to interview for a job opening. Just like that, the husband and new father was a member of the world’s elite pro sports league. Since then, his existence has been a combination of keeping his head down, learning as much as he can and working to improve. He’s excited about where his career could eventually lead, but more focused on getting back to the Super Bowl.

“It’s cool that a lot of younger guys are getting their chance to be NFL head coaches and put their spin on the game,” he said. “I think it does give a little motivation for younger guys to be able to say, ‘You know what? If I do a good job and people see my work and they say good things about me and how I carry myself then maybe I’ll be afforded an opportunity to do that.’