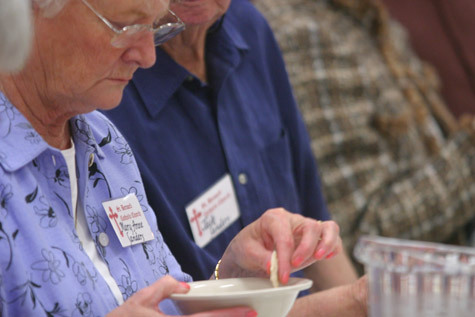 In the past two decades, there has been a growing interest for Catholics in the significance and symbolism found in the Jewish celebration of Passover, the oldest religious festival in Judaism. It refers to God's deliverance of the Jews from slavery in Egypt as described in Exodus 12:13.

On the eve of the first day of Passover, Jewish families gather in their homes to celebrate a meal and prayer service called the Passover Seder. This year, Passover falls on Tuesday of the Christian Holy Week. The connection to Christianity's defining event is evident. When Catholics gather to commemorate the passion, death and resurrection of Christ, the celebration begins by recalling Christ and his Apostles at the Last Supper, which was a Passover Seder meal.

In the Diocese of Little Rock some parishes have incorporated observance of the Seder meal into their Lenten practices. From the small parish of St. Mary in Mountain View to the larger parishes of Our Lady of the Holy Souls in Little Rock and St. Bernard Church in Bella Vista, preparations are under way for this year's Seder meal celebration, a meal that not only commemorates the Jews' deliverance but also hope for the coming kingdom of God.

Cackie Upchurch, director of the Little Rock Scripture Study, said there are certain spiritual benefits for Catholics who celebrate the Passover Seder.

"I think first of all it really connects us with our Jewish brothers and sisters and to the roots of our faith," she said. "It brings to life the fundamental pattern of all of Scripture which is captivity, freedom and covenant."

Msgr. David LeSieur, pastor of St. Vincent de Paul Church in Rogers, summarized the importance of the Passover Seder to the Catholic faith in this way:

"It is a spring celebration of the freedom of Israel from slavery in Egypt. It is not difficult for Christians to make the connection with the sacrifice of the Lamb of God and our freedom from the slavery to sin and death. Lent is a preparation for the Easter mysteries and the Seder helps us to see just how far back the idea of freedom goes in the Judeo-Christian spirit."

According to "The Passover Celebration: A Haggadah for the Seder," the Seder ritual begins by telling the story in Exodus and the history of the enslavement of the Jews. The leader then explains the symbolism of the foods prepared for the meal: zeroah (shank bone of a lamb); beytza (roasted egg); maror (bitter herbs); haroset (mixture of chopped apples, cinnamon, nuts and wine); karpas (green vegetable); and salt water.

Upchurch said there are many physical elements to the Seder meal.

"You share bread, you share wine, you tell the story, you sing -- you participate with all of your senses. It shows the connection of how significant it is that we reenact what our faith teaches and what we believe. It confirms that it is important to have physical symbols -- what we would call sacramentals. It draws that clearly even though we are celebrating a Jewish festival," she said.

The Passover is the key liberating experience in the Old Testament and is the framework for all of the New Testament.

In welcoming participants, the Passover Seder continues with the lighting of the candles. Using the prayer book for the ritual, the leader starts the meal with the blessing of the wine followed by the washing of hands.

Then karpas is dipped in salt water to remind participants of the misery caused by slavery in Egypt.

At that point, the middle piece of three matzas (unleavened bread) on the table is broken and hidden by the leader for children to find later.

The leader then tells the Passover story beginning with the bread of affliction. It is a reminder of the Jewish people's pain in slavery and is also symbolic of the suffering in the world today. Here the leader asks the children to open the door as a gesture of hospitality.

The youngest person attending the Seder asks four questions. The first one is: "Why is this night different from all other nights?" After the explanations, a second cup of wine -- the cup of memory -- is poured followed by another washing of hands and a prayer.

Then the dinner is served. Following dinner, young participants search for the hidden matza and songs or hymns are performed while the festivities continue.

There is a prayer after the meal followed by the third cup -- the cup of redemption. It is at this time the cup of Eljiah is filled and placed in the middle of the table. A recitation of the psalms and the conclusion of the Passover Seder are observed with the fourth cup -- the cup of hope -- along with the final benediction.

Ann Thomisee, director of religious education at Our Lady of the Holy Souls, has been coordinating the Seder meal for Rite of Christian Initiation of Adults candidates, their sponsors and families at her parish for the past eight years. This Seder observance is formal, complete with invitations and booklets for the participants, but is not for the whole parish.

The meal is celebrated the week before Holy Week, which Thomisee said, is in itself a preparation for Holy Week.

"We see what Jesus celebrated and we are connected with the Jewish people. To immerse people in this experience, it cannot help but move them to get more out of Lent," she said. "We find our candidates and catechumens are more immersed in the Church; they become more immersed in our traditions. And our sponsors -- longtime Catholics -- also experience conversion and renewal in their own faith."

At St. Mary Church in Mountain View, Loreena Hegenbart, a catechetical leader, and her husband, Pat have been organizing and preparing the Passover Seder for the past five years. The entire parish of 65 families participates in the event.

A convert herself, Hegenbart uses a Christian Seder format which includes the anticipation of the second coming of Christ.

"It is a time of fellowship and a subtle way of teaching. I decorate the table; I use a table cloth in the Israeli colors of blue and white; nice candlesticks, dishes and wine glasses. I really try to make it special," she said.

At St. Bernard Church in Bella Vista, two separate groups are planning their own Seder meals. Kay Smith, an adult education leader, is organizing the Seder for the Women's Club March 9.

"I was a director of education in Hawaii for 15 years where I had done the Seder meal many times. I did it for the whole parish over there," Smith said.

The event can be elaborate or simple, she said. And music plays an important role. She uses certain songs from Jewish tradition.

"As adults we continue to grow. What happens to a lot of people is that they continue to go to church but they don't really grow. It is important that they open themselves up to new experiences -- ways to get closer to God. And to me that is what we are here for," she said.

Smith's counterpart at the parish, Mary Goerke, and her husband, Fred, have celebrated the Passover Seder in the homes of different families through their Shepherd group, which is one of the many small parish groups at St. Bernard.

"We moved here from Indiana and started celebrating the Seder meal 12 years ago," she said.

This year the observance will be on Tuesday of Holy Week in the parish hall, she said. In addition to their group, Goerke also invites RCIA candidates, sponsors and family members for a total of about 50 people.

Zeroah: Shank bone of a lamb used as a symbol for the lamb's blood placed over the doorways of Israelite homes to protect them when the Lord punished Egypt

Matza: Unleavened bread symbolizing the urgency of the Jews in leaving Egypt and gaining their freedom

Beytza: A reminder of the roasted egg sacrifice at the Temple of Jerusalem at the Passover meal

Maror: Bitter herb, such as horseradish, that symbolizes the misery of the Hebrews in their captivity

Haroset: A salad of chopped apples, nuts, cinnamon and wine to represent the mortar the Hebrews used in their labor when enslaved in Egypt.

Karpas: Parsley or celery used to represent the coming of spring and the bounty of the Lord

Salt Water: Karpas is dipped in this to signify the misery of the Hebrews as slaves