Reconciliation is personal encounter with Christ 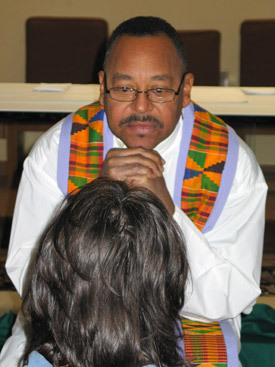 For 38-year-old Eduardo Martinez, the sacrament of reconciliation is the gift of time with his friend, Jesus Christ. He goes at least every two weeks because he can't wait any longer than that to see his friend.

Emily Colford, 17, said the first time she truly realized the power of confession, she had an experience like she never had before. It left her feeling "completely free of everything. I just felt happy with everything and there was just nothing wrong and everything was perfect."

Thelma Paup, 69, said the recent snow gave her insight to explain the sacrament.

"The snow made the air feel so clean and then the sun comes out and everything is bright," she said. "After I've been to confession everything just seems lighter and brighter and cleansed kind of like in baptism."

For Karen Jaworski, 62, it is how admitting wrongdoing brings her peace.

"Looking Father in the face -- it's humbling. He knows I'm a sinner, I know I'm a sinner," she said. "It's an inner peace that seems to come over you once you unload all your extra baggage."

And Eugenio Baquial, 67, said it was God's unending mercy that made it easy for him to return to confession after years of staying away in anger and grief over the loss of his brother and best friend.

"God is a forgiving God. God is a loving God -- an eternal God that really cares and loves us even though we are sinners. He is always there," he said.

With all these descriptions about this sacrament of healing, it is no wonder that the Catechism of the Catholic Church offers so many words to define it. In addition to being a sacrament of reconciliation and confession, it is also called a sacrament of conversion, forgiveness and penance. (See CCC 1420-1498.)

Father Norbert Rappold, pastor of St. Agnes Church in Mena, summed it up simply by saying the sacrament is God's love. Jesus instituted the sacrament because he knew people need to know they are forgiven. He gave this authority to the Church so people could hear the voice of love giving them pardon and peace.

"God wanted us to be able to experience love that he can share in a very real way through the hands, the feet, the voice of others, especially that of the confessor, the priest himself; the priest becomes Christ's voice," he said. "We can hear a voice come back and say, 'It's all right. You are forgiven. God loves you and desires to reconcile with you and to be reconciled with you. Let it go because God now lets it go.'"

In a world that renders condemnation and ridicule, the sacrament of reconciliation offers the chance to hear words of "love, mercy, consolation and encouragement;" words that would hopefully arm a person with the tools to turn away from sin.

So if reconciliation is that personal encounter "with the risen and forgiving Christ" as Msgr. David LeSieur of Rogers explained, then why do so many Catholic stay away from this sacrament?

Father Jack Vu, pastor of St. Michael Church in Van Buren, said he believes participation is low because many people do not understand the sacrament. He hears objections about going to a priest because of fears that confessions might be repeated to other priests or parishioners.

Father Rappold explained that the seal of confession is such that priests are not allowed to repeat what is said in confession nor react to the information outside the confessional.

He offered this example: If a person confesses to Father Rappold that he or she has been stealing gas out of the priest's gas tank, then the priest "cannot based on that information go and buy a locking gas cap."

Fathers Vu and Rappold both said influence from other Christian churches also clouds understanding of confession.

The question, "Why do I have to go and confess to a priest (when) I can go directly to God?" seems to be the main contention, Father Vu said.

Father Rappold clarified that with minor sins one can "take it straight to God" but sins of grave matter must be "reconciled through the confessional."

"We can go and say 'God I'm sorry,' but are we ever fully sure (we're forgiven)?" he said. "Especially those sins that eat away at us, those really serious sins in our lives that the devil really plays with us as far as guilt and guilt feelings."

Msgr. LeSieur, pastor of St. Vincent de Paul Church in Rogers, said confession "gets us beyond guilt and shame and frees us to serve God and others with an open heart that is not burdened with fear."

Fear of the priest's reaction to sins and being away for a long time seem to be other reasons to resist reconciliation, Father Rappold said.

Eduardo Martinez, a member of St. Theresa Church in Little Rock, said he was afraid to go to confession and didn't understand the need to go before he attended a Cursillo retreat in 1997.

"It changed everything," he said. "I started falling in love with (Jesus) because in that way I can be free ... The more you're getting close, the more peace you have in your life."

In addition, Father Rappold admitted the Church "has just not been as good as it used to be to emphasize the need."

He said he notices that when he mentions it more at Mass, confessions in his parish go up. When he slacks off, so do confessions.

Sarah Dennis, 20, of Russellville is a junior at the University of Central Arkansas in Conway.

Dennis said she was in college before she went to confession regularly. While growing up her parents "didn't really place a whole lot of emphasis on it," she said. Before college the last time she went was confirmation.

Dennis said her fiancé has been her greatest influence. He goes to confession weekly and encourages her to go.

Emily Colford, a senior at Mount St. Mary Academy and member of Immaculate Conception in North Little Rock, said a Search retreat in 2005 was responsible for her change of heart regarding confession. Prior to that she didn't understand it and going "wasn't very meaningful or effective."

Pride is another deterrent to confession, Father Rappold said. Father Vu called it fear of admitting fault: "We are afraid of seeing ourselves."

"I think when you talk to a priest and you actually tell another person, I think it makes you really not see things through rose-colored glasses," she said. "You see them as you are."

Emmett Fleming, 70, a member of St. Vincent de Paul Church in Rogers, said confession "provides a direct opportunity and forces you to go through a reflection. You are forced to take a harder, deeper look and that's good and healthy."

The priest's role in the sacrament of reconciliation is a "very humbling, awesome experience," Father Rappold said.

"I know how I always feel going in burdened and coming out enlightened," he said. "It's just awesome to know that I simply participate in God's love and mercy ... And I often wonder why God would have chosen me, but he knows."

How to go to Confession

2. Going to Confession: After the priest welcomes you, both of you make the sign of the cross. Then you may wish to indicate facts about your life, the time of the last confession, difficulties in leading the Christian life, and anything else that may help the priest.

4. Confession of Sins and the Act of Penance: Confess your sins. The priest then offers suitable advice and imposes an act of penance or satisfaction, which may include prayer, self-denial or works of mercy.

5. Prayer of the Penitent: Pray a prayer expressing sorrow for your sins and resolving not to sin again. (Act of Contrition)

6. Absolution: The priest extends his hands over your head and pronounces the formula of absolution, making the sign of the cross over your head during the final words. You answer, "Amen."

8. Dismissal: The priest dismisses you with the command to go in peace. Continue to express your conversion through a life renewed according to the Gospel and more and more steeped in the love of God.

Excerpt from "Celebrating the Sacrament of Penance: Questions and Answers" copyright 2003 U. S. Conference of Catholic Bishops, Washington, D.C. Used with permission. All rights reserved. Excerpts from the English translation of the Rite of Penance copyright 1974, International Committee on English in the Liturgy, Inc. "How to Go to Confession" cards are available at 50 copies for $12 and may be ordered by e-mailing or mail request to: Committee on the Liturgy, 3211 4th St., N.E., Washington DC 20017-1194.