Bishop Edward Fitzgerald was a reluctant but ready servant 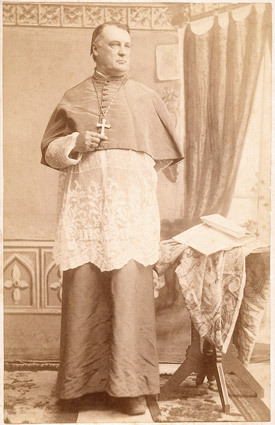 Edward Mary Fitzgerald was the second bishop of the Diocese of Little Rock, from December 1867 until his death in February 1907.

Edward Mary Fitzgerald was the second bishop of the Diocese of Little Rock, from December 1867 until his death in February 1907.

WEST MEMPHIS -- The mark of a great person cannot be measured by isolating one moment. True greatness is measured only by looking back at the entirety of one's life.

Such is the case with the second bishop of Little Rock, Edward Mary Fitzgerald. He influenced all of Arkansas, both Catholic and non-Catholic. In fact, the fruits of his life and ministry continue to bless the Catholic Church in Arkansas to the present day.

On Feb. 21, 1907, Bishop Fitzgerald's death ended his nearly 40 years of service as the shepherd of the Catholic Church in Arkansas. At his funeral, 40 priests from Arkansas, Tennessee and Texas gathered at the Cathedral of St. Andrew to pay their respects to a man who proved to be a true servant. In addition to priests, several bishops from throughout the United Stated celebrated the funeral Mass for the popular prelate.

During his nearly 40 years of ministry in Arkansas, Bishop Fitzgerald emerged as arguably the greatest bishop who has ever served the Diocese of Little Rock.

Bishop Fitzgerald's success as a prelate and priest grew from a mix of natural talent, careful discernment and a deep prayer life. No one is certain of his actual birthday. He was baptized Oct. 26, 1833, in his home parish in Limerick, Ireland. His parents and he immigrated to the United States in 1849. The same year, Bishop Fitzgerald entered the seminary eventually completing his theological studies at Mount Saint Mary's Seminary in Emmitsburg, Md.

After priestly ordination on Aug. 22, 1857, Father Fitzgerald faced the first of what would become a lifetime of challenging assignments. As pastor of St. Patrick Church in Cincinnati, Ohio, he sought to reconcile a parish divided and angry at the archbishop of Cincinnati who had moved a popular pastor. With alacrity for bringing people together, the young priest demonstrated himself to be a true pastor.

A second trait Father Fitzgerald developed throughout his life was his honesty. He was a man who said what he believed while always being open to God's will as spoken through the Church. This characteristic emerged for the first time after his abilities became known in Rome.

On April 24, 1866, the Holy Father issued a decree naming him the second bishop of Little Rock. The Diocese of Little Rock had been without a bishop since the death of Bishop Andrew Byrne in 1862. When word reached Father Fitzgerald that he was to be the new bishop, he declined the appointment.

Of course, his decision infuriated the four clergy serving the Diocese of Little Rock. The pastor of Immaculate Conception Church in Fort Smith, Father Lawrence Smythe, begged the Holy See not to send Father Fitzgerald to Arkansas. Father Smythe wrote the archbishop of New Orleans: "If we had been a rich diocese, we wouldn't be left four years without a bishop."

On Dec. 10, 1866, Father Fitzgerald was commanded under obedience to accept the post of bishop of Little Rock. He was ordained a bishop on Feb. 3, 1867. His jurisdiction embraced the state of Arkansas and present day Oklahoma at that time known as the Indian Territory.

Yet, another challenge faced the young bishop. Like his emigration to America, he had to learn about a new land and its people.

On March 12, 1867, Bishop Fitzgerald entered the Diocese of Little Rock at the place where his predecessor had died nearly five years previously.

As soon as the honeymoon stage wore off, Bishop Fitzgerald found himself at odds with priests who were used to running their own ministries as they saw fit.

Exhibiting the same courage and faith which made him a success at St. Patrick in Cincinnati, Bishop Fitzgerald faced many problems from both inside his flock and outside the fold. The Church in Arkansas faced anti-Catholic and anti-immigrant sentiments. Parts of Arkansas suffered from economic and medical disasters. Crops failed. Yellow fever and other diseases spread.

Upon his arrival, he got to work. Problem clergy were disciplined. He began to rebuild church buildings ravaged by war and neglect. Yet, before he could settle his roots too deep in Arkansas, he had to place his plans on hold to serve the entire Church in a special way.

On Dec. 8, 1869, the First Vatican Council opened. At this council, Bishop Fitzgerald, as Dr. James Woods wrote in "Mission and Memory: A History of the Catholic Church in Arkansas," "became a footnote in the history of the universal Catholic Church."

On July 13, 1870, along with Bishop Luigi Aloisio Riccio of Cajazzo, Sicily, Bishop Fitzgerald voted against the dogma of papal infallibility.

Some historians have called this moment the "Big rock versus the Little Rock." However, the reality was much different. As a father of the council, he had a moral obligation before God and the Church to consider the question and to offer his own honest assessment of the propriety of declaring the dogma at that time. True to his own deep faith, Bishop Fitzgerald acknowledged his own faith in the theological truth of papal infallibility.

However, he voted as he did as the shepherd of a particular diocese in a part of the world very different than Catholic Rome. He feared the real possibility of Catholics being killed in his own diocese or at least the worsening of anti-Catholic sentiment.

Once home, Bishop Fitzgerald worked tirelessly to shepherd the portion of the People of God entrusted to his care. Soon he suffered what we would now call depression. In a letter to his former bishop and friend, he wrote, "I find in me a growing dislike in making exertions of any kind, a bad sign in me, no longer a young man ... I am overwhelmed with despondency and gloom." He echoed his predecessor who referred to Arkansas as a "suburb of hell."

Eventually the darkness of depression lightened as he began to work at establishing the infrastructure of what we know today as the Catholic Church in Arkansas. He established a number of parishes, ordained many priests and encouraged Catholic immigration into the state.

On July 7, 1878, a cornerstone was laid to the present cathedral. The new cathedral in Little Rock was consecrated on the first Sunday of Advent, Nov. 27, 1881. Bishop Fitzgerald had the remains of Bishop Byrne brought to the cathedral and interred in the crypt.

By November 1881, the Catholic population in Arkansas had grown from 2,500 in 1877 to 6,200. Immigrants from Switzerland, Italy, Poland and other places flocked to America.

Bishop Fitzgerald's life in Church history is frequently reduced to "that bishop who voted against papal infallibility." However, the man was more than one incident. God used the readily available gifts of the reluctant bishop to build his Church in Arkansas.

Father Luyet is the pastor of St. Michael Church in West Memphis and its missions in Horseshoe Lake and Crawfordsville. Research for this article came from an unpublished thesis written in 1991 for his bachelor's degree in history from the University of Dallas.

Time for prayer: More conversations with God this Lent