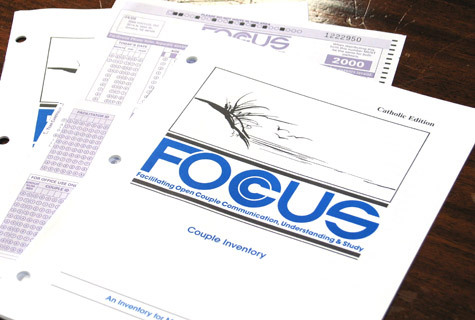 Malea Hargett
Couples who get married in the Diocese of Little Rock take the FOCCUS inventory during their three-part marriage preparation process.

Malea Hargett
Couples who get married in the Diocese of Little Rock take the FOCCUS inventory during their three-part marriage preparation process.

Like any couple, Erin Bader and Tyler Boelkens have their differences. That's why there's FOCCUS.

Bader, 25, and Boelkens, 26, both of Little Rock, are to be married in June. Both participated in FOCCUS, Facilitating Open Couple Communication, Understanding and Study.

FOCCUS is part of a three-part process for marriage preparation, according to Elizabeth Reha, director of family life for the Diocese of Little Rock. Reha's office, which is responsible for helping young couples through marriage preparation, is funded by the Catholic Arkansas Sharing Appeal, known as CASA.

The first stop for young couples is an initial meeting with the priest or deacon, which includes a questionnaire to see if they're free to marry. In the second segment, the priest or deacon will administer the FOCCUS instrument. The third part is the educational portion of their marriage preparation, which can be attending a Pre-Cana Day or Sponsor Couple meetings.

"This tool allows the couples to be asked questions that, maybe, they hadn't thought of, such as questions (about) family of origin, finances, sexuality and communications," Reha said.

"This is not a litmus test for if their marriage will survive. It's a tool to raise issues or disagreements to have a discussion around," she said. "They can converse and work with a priest or deacon to help them in marriage preparations."

FOCCUS has been in use for about 20 years and in the last 10 has been the sole tool for determining compatibility in the diocese.

"It really brought to light the things we hadn't talked about," Bader said. "Some of the questions are really hard to answer."

About a month later, the two reviewed their results with their pastor, Msgr. Francis I. Malone at Christ the King Church in Little Rock.

"He went over all the areas for concern, areas that we didn't match on and asked 'Why is this?'" she said. "We talked about it for a little while, but I was really surprised at how similar our results were."

Beolkens agrees that FOCCUS was very helpful -- not just in the post-inventory discussions, but also pre-inventory.

"I thought it was really beneficial and included a lot of topics we had already discussed," he said. "Even in the days before we knew we were taking it, we started talking about things to make sure we believed the same things, as how to raise children."

Msgr. Malone is a believer in FOCCUS.

"Over the years, I have shared the test with those who are in the profession of marriage counseling. It's a very insightful instrument," he said. "I've had couples that I needed to refer, on those rare occasions, to a counselor, I've sent a long those result and they've able to use them as part of the counseling."

It's that insight that makes FOCCUS so successful, Reha said.

April Thompson, 34, took the assessment along with her fiancé in preparation for their marriage in May at St. Patrick Church in North Little Rock to Donald Jones Jr. 48. Being an educator at Parkview High School in Little Rock, she saw FOCCUS through a teacher's eyes.

"There were a wide variety of topics and subtopics including extended family, finances and parenting. We thought it was very thorough," she said.

"There were no surprises. We knew finances would be our strongest area, and we knew what our weakest area was," she said. "There was nothing that made me look over and say, 'Who is this man?'"

As a Baptist, Thompson found herself impressed by the marriage preparation process.

"I thought pre-Cana was fabulous," she said. Her only regret was not being able to keep a copy of the answer sheets. "It would've been good to come back a year from now to look at it again. I do know a few couples that have family meetings on how the year went between them. It's a good evaluation form."

As for Bader and Boelkens, the two met on common ground -- a baseball game -- but may have work to do on a key difference. She's a Cardinals fan. He's a Cubs fan.

"Sometimes, there are just irreconcilable differences," Msgr. Malone said with a chuckle.