Monk never imagined this life for himself

Brother Patrick's life changed forever once he heard Spirit in others 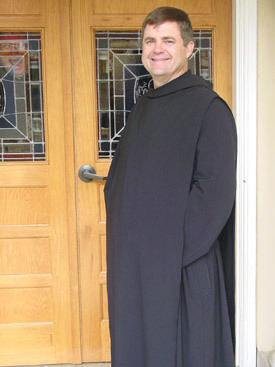 Greg Boland was working as a campus minister at a Catholic high school in Georgia in 2003 when he heard a priest say that sometimes the Holy Spirit speaks to you through others.

Boland took the message to heart and began to think of all the times others had said he would make a good priest or brother. He realized that might mean something and decided to give "God a fair chance."

Today Boland is known as Brother Patrick and is a newly professed Benedictine monk at Subiaco Abbey. This fall he will take electrician, boiler operator and farm and auto equipment repair classes at Arkansas Tech University in Russellville.

"I'll be kind of like a maintenance guy," he said. "I'll also be working on the farm with the cattle."

In addition to Subiaco Academy and Coury House Retreat Center, a farm and ranch are also on the grounds of Subiaco Abbey, which keeps the religious priests and brothers there very busy. They serve as teachers, spiritual directors, retreat leaders, parish pastors, groundskeepers, sawmill workers, carpenters, farmers and ranchers.

But the most important job they do is pray. Four times a day the monks pray the Liturgy of the Hours as a community. They also attend daily Mass together.

Brother Patrick, a 44-year-old Pennsylvania native, never imagined this life for himself. In fact, the first time his spiritual director suggested he might be called to religious life he sarcastically remarked, "'What, you mean like a monk?'"

He said he was even more shocked when he found out the monastery he planned to visit in July 2003 for a private retreat was in Arkansas.

"That's when I said, "You gotta be kidding me. I'm not going to Arkansas. That's ridiculous."

"It wasn't until I actually got here that I realized it was a vocation retreat," Brother Patrick said. "I'm thinking, 'I'm in the wrong retreat,' but decided not to do anything. I just thought I'd see where this leads."

The whole situation just seemed so "weird" that he thought, "Maybe God's hand was involved." Looking back now, he said it seems he was right. That retreat ended up changing this life. Though he did visit other monasteries the following year, Subiaco stayed close to his heart.

"It was the first place that felt like home other than my parent's house," Brother Patrick said. "It felt like an old comfortable shoe."

"There probably wasn't a day in that year in my daily prayer or during my spiritual direction that I didn't think about or talk about Subiaco or the monks I had met while I was here," he said. "And a year later I said there was something significant about that."

He returned to Subiaco in July 2004 for another vocations retreat and at the end of that retreat he turned in his application. He was interviewed that December and was accepted in the spring 2005. That gave him until September to leave his job and move from Macon, Ga., to Subiaco.

On Sept. 5, 2005, he entered the abbey as a candidate and received the first garment that makes up a Benedictine monk's habit: a black cassock, which includes a black leather belt.

His candidacy lasted six months and on Feb. 1, 2006, he became a novice and received his first scapular, which he described as being similar to a priest's alb but without sides.

After a yearlong novitiate, on Feb. 2, 2007, he took his religious name after he made his first profession. The simple ceremony took place during evening Vespers. He made his vows and Subiaco prior Father David Bellinghausen, OSB, blessed his new scapular with capoch (hood) and placed it on the monk.

Brother Patrick vowed stability to Subiaco Abbey, obedience to Abbot Jerome Kodell, OSB, and the Catholic Church, and conversion of life to the community, which includes vows of poverty and chastity.

"The reason you get the new outfit and blessing is not just to bless the object that you wear, but also to cleanse," Brother Patrick explained. The prior's words are basically, "'I clothe you as a new man.' It's the beginning of a new life and that's the significance of the name change. I put away my old self and put on my new."

The first profession lasts three years and at the end of that time, Brother Patrick said he would have the option to apply for permanent membership in the Subiaco community.

Throughout this process, Brother Patrick said he has been guided by formation director, Father Leonard Wangler, OSB. Prayer has been the foundation of his formation. He has also attended two years of classes on the Rule of St. Benedict, Scripture study, saints, celibacy, sexuality, Subiaco history and liturgy.

"Up until now I work a half a day and study half a day."

He said his classes would end in May. The next three years he said he would be a part-time student and work at the abbey.

Brother Patrick said there are four key things he would advise young men to do if they think they may be called to religious life.

"Jumping too fast, moving too quickly is dangerous because as we know when you're in an infatuation period of a relationship, everything's always glorious and rose colored," he said. "It's down the road that you discover true love or not."

"Prayer is our communication with God," he said. "If you're in a relationship with someone how can you ever know the person if you never talk to them?"

Finally, pay attention to how God is working in your life. "I can identify four specific times I might have been called and I just ignored it," he said. "I spent many years trying to be somebody, and I think through that growth, I realized who I was."

A day in the life of a Subiaco monk

On Tuesdays, Thursdays and Sundays the monks have community recreation time after Vespers; while on Wednesday nights at that time is quiet time in their cells.