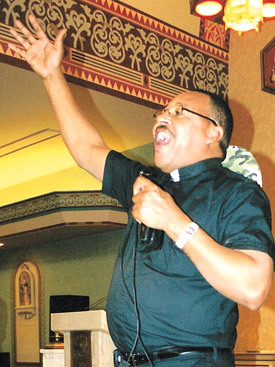 St. Joseph School
Father Harvey speaks animatedly about vocations to Conway students Jan. 11. When preaching, he says, "I'm going to call it when I see it."

St. Joseph School
Father Harvey speaks animatedly about vocations to Conway students Jan. 11. When preaching, he says, "I'm going to call it when I see it."

Father Warren Harvey said he was 9 years old when he first realized blacks were treated differently than whites. He was at the Faulkner County Fair when he needed to use the restroom. His mother told his older brothers to take him "to the right bathroom."

He said he remembers wondering what that meant and then he saw "colored only" over the door and thought, "What's this all about?"

Though Father Harvey was only 3 years old during the Central High Crisis, he said Conway public schools were still segregated in 1965, the same year he entered the predominately-white St. Joseph School.

Previously, he attended Good Shepherd School until it closed that year. He said the majority of the students were not Catholic, but they were all black. His father, a Catholic, was determined for his 14 children to attend a Catholic school.

Father Harvey said the first day was the worst. He was entering sixth grade. His father arranged for him and the other seven former Good Shepherd students, including two of his older brothers, to gather in front of his family's home to ride the school bus together.

"We had to ride the bus with white kids, which never happened in Conway," he said. "We got on the bus and there was just silence. And the bus driver kept saying, 'take a seat, find a seat, everybody sit down.' Well, nobody would move over and let us sit with them."

Finally some St. Joseph students who knew his father made room for them, but the ride to school was quiet.

Little did he know then, his experiences as a child would prepare him for a major first later in life. In 1988, Father Harvey was ordained the first black priest for the Diocese of Little Rock.

He has certainly brought his own personal flair to the priesthood, first in Little Rock and North Little Rock and now in Pine Bluff. Though his father was Catholic, his mother's side of the family is Baptist. Both his grandfather and great-grandfather were preachers.

In fact, the realization that he could be himself led him to the seminary. In 1980, he attended a national conference for black Catholics in Chicago.

"That was my first exposure to what a Mass can be like in the black culture," he said. "They had a 100-voice choir with drums and guitar, piano and organ."

Father Harvey had always loved singing in the choir, but he never heard Gospel music in a Catholic Mass. He and the participants from St. Augustine Church in North Little Rock were in awe and afraid to join in the clapping.

When he heard a black priest preach as they did at his mother's church, he was inspired. Then when the priest sang, he thought, "This is a guy after my own heart." He knew it was what he wanted to do.

Father Harvey later taught the St. Augustine choir black Gospel music. "We had a choir that couldn't even clap on time because they had been so indoctrinated with the European Church," he said.

Father Harvey was pastor of St. Augustine for 18 years, beginning only 11 months after ordination.

He said he thinks St. Augustine, one of three remaining predominately black parishes in the state, deserved to have him to help the parishioners further develop spiritually in their culture.

"The whole black Catholic movement in this country is fueled by black leadership, especially black priests, who are sharing their gifts of blackness so to speak," he said.