Black community suspicions about Catholics were added to the varying strains of being black in the South during John Gillam's 88 years and counting. Through it all, he has stayed true to his faith, successfully raised a large family and helped integrate the Church in Arkansas. Only on the Arkansas Catholic Web site. " />

Parishioner looks back on challenges of being black and Catholic 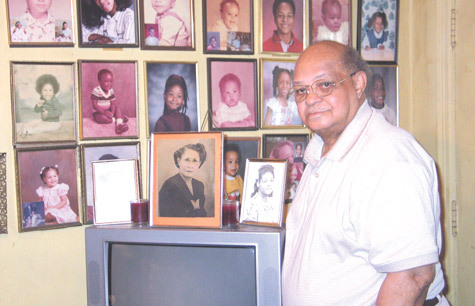 Photographs revealing warm, smiling faces line the living room walls and top every level surface in the home of John Gillam in Little Rock. Multiple generations spanning more than a century reveal the rich Catholic history this octogenarian has experienced.

Gillam and his late wife Louise have 15 children and countless grandchildren. (Gillam said he lost count when the number hit 30.)

Along with his family are photos of Pope Pius X, Bishop Emeritus Andrew J. McDonald and his parish church. Above his couch hangs an apostolic blessing from Pope John Paul II for his 50th wedding anniversary celebrated Jan. 9, 1991. The Gillams had 63 years together before Louise died in 2004.

Gillam always loved taking photos. For many years he even had a photography business. In the early 1950s, he worked at The Guardian (now Arkansas Catholic) newspaper. "I developed, I printed, I enlarged, I did everything. I loaded the equipment."

Gillam, 88, a St. Bartholomew parishioner, said growing up in the segregated South was one thing, but being Catholic as well "was rough."

White people racially discriminated against him while black people, the majority of whom are Protestant in Arkansas, ostracized him because of his faith, he said.

In his youth he attended St. Bartholomew School through the sixth grade. During the 1920s and '30s, a tuberculosis epidemic swept through Little Rock. Fearing he was contagious, he was not allowed to return to St. Bartholomew and entered Dunbar Public School. Prior to 1929, Gillam said St. Bartholomew was the only Little Rock school for black students. It opened in 1911.

He graduated from Dunbar in 1937 at the height of the Great Depression. He did not have the money to go to college.

As the years went by, he worked hard to support his growing family.

"I have worked as many as five jobs at one time," he said. "My day would begin at 6 o'clock in the morning and end at 12 o'clock."

In 1956 Gillam got a job at the U.S. Postal Service. At the time, it was still segregated and black workers were just beginning to get better paying jobs. About the same time, Gillam got involved in the Catholic Interracial Council of Greater Little Rock.

Aside from working to integrate Catholic schools, organizations and a hospital, he said the council resolved to attend Mass at one white Catholic church each month during the 1960s.

Once Gillam was called "boy" and another time some people refused to shake his hand during the sign of peace at Mass. Aside from that, he said, "we were received pretty good."

Looking back, Gillam said he is not sure how his life took the path it did.

"My father was Catholic a long time, but he didn't do some of things I did," he said. "And I really don't know why I did them, to tell the truth. I got caught up in it and I just kept going."

Gillam and his wife, who he called "a wonderful mother, my companion and my lover," were given the Daniel Rudd Memorial Award by the Diocesan Council of Black Catholics in 1989. The honor is given each year to celebrate black lay leaders who exhibit great love for the faith and community leadership.

Gillam, a prostate cancer survivor, said he is proud of his children, many of whom went to college and now hold jobs not possible in his youth.

Father Warren Harvey, liaison for the DCBC, said Gillam is "a model for all of us in being patient and determined."