More to know about integration in the diocese 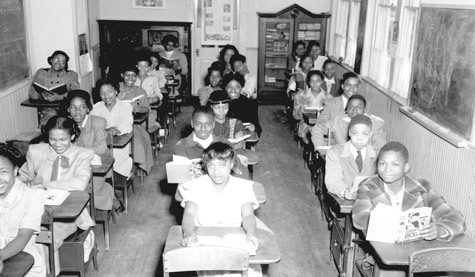 Diocese of Little Rock archives
Children smile for the camera in 1949 at St. Bartholomew School in Little Rock. The school served black students until it closed in 1974.

Diocese of Little Rock archives
Children smile for the camera in 1949 at St. Bartholomew School in Little Rock. The school served black students until it closed in 1974.

Catholic schools for black students date back to the late 1800s in Arkansas. In 1960 there were 10 predominately black schools. Today there is only one. Here is a list of the known schools.

The Colored Industrial Institute was a Pine Bluff high school from the 1880s to the early 1900s. Also, the Benedictine Sisters in Pocahontas opened a school, name unknown, in 1888..

According to "Mission and Memory: A History of the Catholic Church in Arkansas," the Carmel of St. Teresa of Jesus monastery for cloistered nuns was originally downtown near the Little Rock School Board building. In 1959 opponents of school integration destroyed the schools' building with a dynamite blast and damaged the convent beyond repair. The present convent near the University of Arkansas at Little Rock was built in 1961.

The Sept. 27, 1957, Guardian reported that a black teenage girl was assaulted when she was struck by a stick thrown by a white man on the grounds of St. Bartholomew School, only a half-mile from Central High. She was not a student at the school but was walking by and sought refuge from her attacker.

As true today as it was then

"Let me remind some Catholics that persons of every race, creed and nation should be made to feel at home in every Catholic Church. ... Every Catholic church is God's house ... it is where he dwells, body and soul in the Blessed Sacrament ... He invites everyone without exception to come and visit him. Who are we to draw a line on who is welcome?

"The Catholic Church should be the one place on earth where all men are equal. It is our Lord's home and we are all welcome, rich and poor, learned and illiterate, master and servant, white and colored, saint and sinner. All men are his children. All are his, not our invited guests. Anyone who is good enough for him to invite, certainly ought to be good enough for us to accept. His Church, you know, is catholic."

Click here to return to the index of Remembering 1957 stories.