News & Views From You | Event 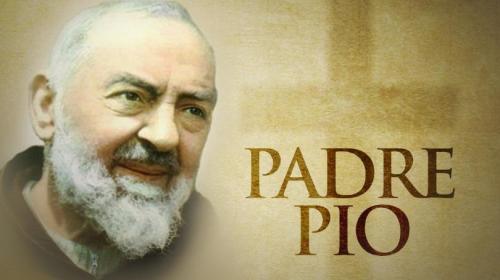 The relics of Saint Pio of Pietrelcina, OFM Cap., commonly known as Padre Pio, are touring the United States and will be exposed for veneration at Christ the King Catholic Church in Oklahoma City on Friday, Sept. 27. Doors will open at 9 a.m.Priests of the archdiocese will be available for confessions from 10 a.m.until 5 p.m. Veneration will be suspended by 5:30 p.m. for solemn Mass at 6 p.m. with the Bishop Paul S. Coakley, archbishop of Oklahoma City, presiding. Overflow parking will be in the north parking lot All Souls Episcopal Church, located at NW 63rd and Pennsylvania Ave., and shuttles will run every 5-10 minutes during veneration.

Available for veneration will be Padre Pio’s glove, the crusts of his wounds, cotton gauze bearing his bloodstains, a lock of his hair, his handkerchief soaked with his sweat only hours before his death, and his mantle (the cloak he wore). All relics except his mantle will be available for the faithful to touch their holy items to. The mantle will be on display only. More detailed information about the event may be found at https://ckokc.org/padre-pio.

Padre Pio was born on May 25, 1887, in Pietrelcino, Italy, and became a priest in 1910. On September 20, 1918, the stigmata, the wounds of Christ, appeared on his body, making him the first Catholic priest in the history of the Church to be stigmatized. In 1940, Padre Pio began working to develop a Home for the Relief of Suffering (the Casa Sollievo della Sofferenza), which opened in 1956 on Mount Gargano, four hours from Rome.

Padre Pio, a mystic, was known for his gift of “reading souls” and spent many long hours hearing confessions. In his lifetime one of his fellow friars claimed to witness Padre Pio levitating, and others reported that he bi-located, appearing in two different places at the same time in order to lend comfort or support to people in dire need. He is said to have had gifts of healing and prophesy, as well.

Padre Pio died in September 1968 at the age of 81 in SanGiovanni Rotondo, Italy, and many thousands of mourners attended his funeral at Our Lady of Grace Church, where his body was entombed. The cause for PadrePio’s sainthood was opened in February 1973, and Pope John Paul II declared him“Venerable” in 1997. On June 16, 2002, Pope John Paul II proclaimed Padre Pio“Saint Pio of Pietrelcina.” Padre Pio is the patron saint of Italy, civil defense volunteers, adolescents, and stress-relief.

To learn more about Padre Pio and the national tour of his relics, visit https://www.saintpiofoundation.org.

Christ the King Catholic Church, located at 8005 DorsetDrive in Nichols Hills, Oklahoma, was established in 1949 under the leadership of Rev. Charles Buswell. The current pastor is Rev. Richard D. Stansberry. Christ the King is a vibrant faith community of more than 1,800 families. Christ the King School educates students from age 3 through 8th grade. The principal is Amy Feighny.