Arkansas Catholic has been the weekly newspaper for the Diocese of Little Rock since 1911. Today it is published 46 times a year and reaches more than 9,000 households. Bishop Anthony B. Taylor is the publisher. 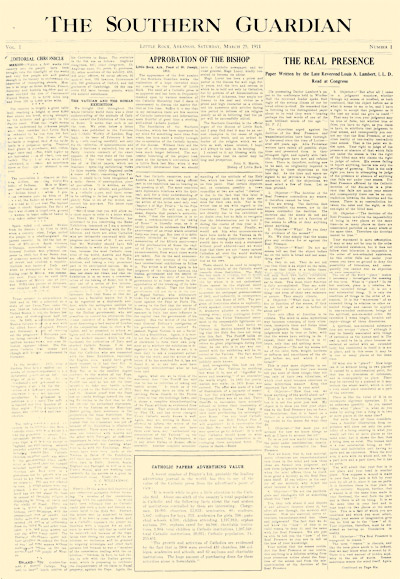 From an office at 315 West Markham Street in downtown Little Rock, the first issue of The Southern Guardian was published on the Annunciation, March 25, 1911.

• Click to read newspaper issues from 1911 through 2001, preserved with support from the Guardian Angels.

Since Bishop Morris arrived in 1906 from Tennessee, he had wanted to start a newspaper to educate the 22,000 Catholics in the state. He named vicar general Msgr. J.M. Lucey, a Confederate veteran of the Civil War and pastor of St. Joseph Church in Pine Bluff, the founding editor.

The newspaper would be printed 52 times a year for an annual subscription price of $1.50.

As sort of a stamp of approval, Bishop Morris included “the bishop’s approval” in the first issue and on the newspaper letterhead. “The Southern Guardian is the official organ of the Diocese of Little Rock, and I pray God that it may be an earnest champion in the cause of right, justice and truth and an ardent defender of the religion which we all love so well. I extend to it my blessing with the sincere hope that its career may be long and prosperous,” it stated.

After six months Msgr. Lucey stepped down, and Father Augustine Stocker, OSB, from New Subiaco Abbey was asked to oversee the weekly newspaper.

After its first anniversary, the bishop wrote a letter to the manager, Victor Spalding, saying, “The Guardian will prove a great power for good in the diocese, and you need not to have any fear that your best efforts put forward in its behalf will go unrewarded.”

The newspaper offices were moved to Fourth and Center streets in 1912, and in 1919 it moved to offices on West Second Street, where it remained until 1967.

In 1915 the word “Southern” was dropped from the newspaper’s name. Father George H. McDermott debuted his weekly column called “Question Box.” The column was written over the decades by different priests.

February officially became Catholic Press Month nationwide in 1923. The U.S. bishops adopted a resolution, urging, “all Catholic periodicals to become affiliated, as pay subscribers, to the NCWC (National Catholic Welfare Conference) Press Service, and all pastors to use in their parishes, schools and societies the various periodicals issued by the NCWC Press Department.” The NCWC eventually became the U.S. Conference of Catholic Bishops and its press service was renamed Catholic News Service.

“The Catholic Press deserves the enthusiastic and generous help of all Catholics. Their support should go beyond the mere subscription to the Catholic paper of the diocese. Catholics should try to understand the needs of the Catholic Press; they should acquaint themselves with its actual achievements, and with the opportunities that are at hand to develop still further its tremendous power,” according to the bishops’ statement.

Since that time, the diocesan newspaper has supported Catholic Press Month and encouraged Catholics to subscribe or renew their subscription during February.

When Father McDermott died in 1933, Msgr. J.P. Fisher and Father Harold Heagney followed as editors. Each of these men worked only part time for the newspaper while handling other diocesan and parish duties. With the Depression in the 1930s, the newspaper never stopped being published but operated at a financial loss. The first full-time editor was Msgr. Thomas J. Prendergast in 1935. He was credited with transforming the struggling weekly newspaper into an award-winning publication over the next 23 years.

For 30 years a standard part of the newspaper was a front-page column called “Qui Vive?” which is French for “Who Lives?” Msgr. Thomas L. Keaney originated the column under the pseudonym “The Sentry.”

Also in 1935 the newspaper made the bold move of reducing its subscription rate from $2 a year to $1. “The Guardian will accomplish its greatest good by entering the greatest possible number of Catholic homes in Arkansas,” an article stated.

Msgr. Prendergast organized the newspaper’s first board of directors and opened up a full-time print shop.

Even after 30 years as the bishop, Bishop Morris continued to promote the importance of a Catholic press. In a front-page letter, he wrote in 1943, “It would please me immeasurably to have every parish in my diocese able to claim The Guardian is going into every Catholic home. Only then can we expect to have the full benefit of a diocesan newspaper; only then can we expect The Guardian to be strong and useful.” 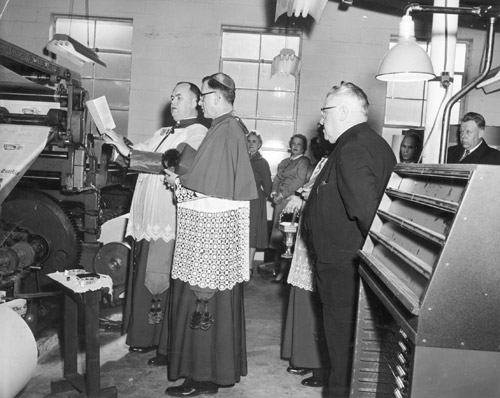 O’Donnell first broadcast his radio program “The Guardian Reporter” on local and world Catholic news in 1955. It could be heard around the country each Saturday.

In 1961, for its 50th anniversary, the newspaper’s appearance changed dramatically by becoming a tabloid. More diocesan newspapers were choosing to publish in the smaller format.

In the Feb. 24, 1961, anniversary issue, Bishop Albert L. Fletcher wrote, “A half a century is a long time for any Church activity began under the trying and sometimes precarious conditions of pioneer life. Possibly the life of a Catholic newspaper in a missionary country is more precarious than almost any other activity undertaken by the Church.”

The Guardian Church Goods Store was sold to Edward Lipsmeyer in 1966. The next year the newspaper began to be printed by an offset process and closed its own print shop. The decision to shut down the diocese’s old letterpress meant the print shop employees were laid off.

When St. John Seminary closed, the newspaper offices were moved from downtown to the old seminary along with the bishop’s office and other diocesan offices in 1968. “Typographical and composition work” continued to be performed in an auxiliary office at Roto-Lith Publishers in North Little Rock.

In 1972 the newspaper announced a reorganization of its business operation. The decision came after more than a dozen diocesan newspapers around the country were forced to quit publishing because of the financial strain.

Father J. Gaston Hebert led the editorial advisory board that suggested several changes to be made. An editorial page was reinstated and the requirement to publish all local news was abolished in 1975.

In 1981 O’Donnell was ready to retire and Karl Christ (pronounced ”krist”) was brought in to handle the day-to-day operations. Father Joseph Conyard, SJ, was named the managing editor in 1985, but Christ continued to oversee editorial operations.

With the March 21, 1986, issue, the newspaper made another big change. It was renamed Arkansas Catholic in honor of its 75th anniversary. A redesign also included a new format, typeface and column width. Christ called it a “rebirth” and a “new era.” No explanation for the name change was given, but it is believed that the name would better signify who the newspaper represented and was more contemporary.

Pete Hoelscher joined the staff in 1993, followed by Malea Hargett in 1994. With Father Schneider’s departure in 1994, Msgr. Francis I. Malone stepped in as managing editor. From 1997 to 2000 Danny Straessle served as managing editor. Since 1997 the newspaper has not had a priest on staff but has worked closely with a priest assigned as the theological consultant. Father Erik Pohlmeier was named the theological consultant in 2003 after Msgr. Malone was relieved of those duties.

With Bishop J. Peter Sartain’s arrival in 2000, the newspaper underwent a major redesign. When the newspaper changed to a new printing company in 2003, it was able to add four-color photographs and artwork to its pages for the first time.

For 90 years the newspaper staff’s main focus was publishing a weekly newspaper. In later years it has also overseen an annual diocesan directory and started a biennial directory of Catholic businesses in 2002. With advancements in technology and changes in the diocese, more responsibilities were given to the newspaper staff. In 2003, with the ordination of the diocese’s first Mexican-born priest, a four-page newsletter in Spanish called Arkansas Catholic en Espanol was introduced. Originally it was published six times a year, but increased to 10 times a year. The newsletter was discontinued in 2011.

Book publishing was another endeavor the newspaper staff undertook when Bishop Sartain decided to publish a compilation of his best-known columns. “Of You My Heart Has Spoken” was published in 2005 and is now in its sixth printing.

For 70-plus years the small staff published a newspaper 52 or 53 times a year. In the 1980s the decision was made to cut back production to 48 times a year to allow the staff to take vacations and upgrade equipment. In 2009 the frequency was reduced to 46 times a year.

As on many important anniversaries in the past, Arkansas Catholic unveiled a new design on Feb. 5, 2011, for its centennial. The centennial was observed in the March 26, 2011, issue with articles about newspaper’s history, biographies of its first editors and life in 1911. An anniversary Mass and celebration were held with the current and two previous publishers Oct. 16 at the Cathedral of St. Andrew with Bishop Anthony B. Taylor as well as retired Bishop McDonald and Archbishop Sartain, then serving in Seattle.

Two other digital advancements were made in 2014-2015 after a communications plan was written. A new digital version of the newspaper was released in October 2014. Bishop Taylor made the digital edition free to anyone beginning in November 2019. aSpire, an e-mail newsletter, was unveiled in March 2015.

The newspaper website was updated in 2014 and again in 2016 to better serve readers on mobile devices. The newspaper got a fresh new look with a large front page photo in March 2018. To round out the different platforms that Arkansas Catholic uses to reach Catholics in Arkansas, a podcast called Arkansas Catholic Asks was first produced in November 2018.