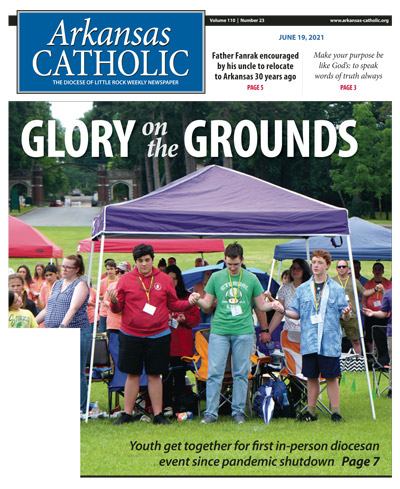 Here are some of the stories you missed if you didn't read Arkansas Catholic's June 19 issue.

Archbishop: Use online outlets to spread the beauty of truth, not hate

DETROIT -- Rather than mere disagreement, an epidemic of hatred in the digital sphere is poisoning social communications and damaging the unity Christ calls for his body, Detroit Archbishop Allen H. Vigneron said in a new pastoral note June 11.

Who actually raised Jesus Christ from the dead?

Q. Something I heard recently at Mass bothered me. The priest, reading from the Scriptures, said: “God raised Jesus from the dead.” While this  statement doesn’t exactly dispute Jesus’ divinity … (Question Corner, Seeds of Faith)

Teach children about race relations as they can understand

I was in college in the '60s when a classmate told me about a little child who had never seen a Black person before. My classmate had been traveling with her husband, a U.S. soldier stationed in Europe. (Columns)

Recently my hair stylist and I got onto the topic of suicide -- specifically, the insidious way that it spreads among teenagers. One suicide often leads to another, which leads to another. I made the comment “It is demonic.” (Columns)

Catholics must respond to voter suppression

Voting is an essential element of a vibrant democracy. Voter turnout in the 2020 presidential election was the highest in several decades, where nearly two-thirds of estimated eligible voters participated in the process. (Guest commentary)