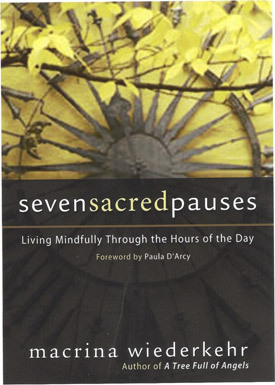 "Seven Sacred Pauses: Living Mindfully Through the Hours of the Day" is based on Sister Macrina Wiederkehr's insights over the past five years.

"Seven Sacred Pauses: Living Mindfully Through the Hours of the Day" is based on Sister Macrina Wiederkehr's insights over the past five years.

FORT SMITH -- Pilgims on a spiritual journey might be well-advised to take along "Seven Sacred Pauses: Living Mindfully Through the Hours of the Day," Sister Macrina Wiederkehr, OSB's new Sorin Books release, as a traveling companion.

Taking the insights gleaned from praying the Liturgy of the Hours for 49 years as a Benedictine sister in St. Scholastica Monastery, Sister Macrina shares realizations about the spirituality of each hour that took her 44 years of daily prayer to discern.

"About five years ago when I was at our house of prayer (Hesychia) I was almost startled into the realization that each of the hours has a special spirit, a theme, which we have never adequately addressed," Sister Macrina said. "That moment of awareness was a great jewel in my life and ever since that day I have tried to be more mindful of the anointing rhythm of the hours and the special spirit that companions each hour." And, although the sisters at St. Scholastica pray a modified version of the Liturgy of the Hours as a community. Sister Macrina has also prayed all seven "hours" with cloistered communities at Gethsemane Abbey and elsewhere.

When people pause to make a conscious connection with God during each day, they are able to realize "the mystical possibilities of every moment," Sister Macrina said. In modern western society, multi-tasking seems to be much more in style than intentional pauses for prayer. No longer do people stop working in the fields when they hear the Angelus bells sounding in the church steeple calling them to prayer, but the hurried, stressful rhythms of life make those pauses, and the need to balance work, prayer and leisure, even more important, she said.

The idea of praying at structured times throughout the day is shared by several faith traditions. Muslims pray five times a day (Salah) and Jews two or three times (Shema Yisrael.) Sister Macrina hopes that people of diverse religious traditions, or even of no religious persuasion, might find praying through the hours of the day could give them common ground.

Sister Macrina suggests that readers use the reflections, poetry and prayers in "Seven Sacred Pauses" as a way to become more mindful of the wisdom and spirit of the hours and listen deeply to God's voice. Readers can decide to focus on a different hour each day or, when time permits, to set aside a day or two for reflection and prayer two or three times a year to explore the hours.

All of Sister Macrina's books have been designed to allow readers to take contemplative journeys in the comfort of their own homes. "'Gold in Your Memories" and "Behold Your Life" helped people who were searching for healing in their lives. "Seasons of Your Heart" and "The Song of the Seed" were based on Scripture and "came totally out of my prayer of Lectio Divina," Sister Macrina said. "ëA Tree Full of Angels' is really Lectio with daily life."

Sister Macrina, a nationally recognized retreat director, is leading seven retreats through December -- one in Houston, Texas; one in Marriottsville, Md.; two in Pennsylvania; and three in Arkansas. She will lead a retreat at Coury House, Subiaco, from April 11-13 called "The Medicine of Deep Listening: Honoring the Soul's Need for Reflection." At St. Scholastica Monastery, she will lead two retreats. A five-day Lectio Divina retreat will be held Sept. 20-26, and a weekend retreat, "Soul Writing: Drawing Up Words from the Deep Places," will be held Oct. 10-12.

She will hold a debut "autograph tea" at St. Scholastica Retreat Center from 2 to 4 p.m. Sunday, March 30. She will give a short presentation at 3 p.m. "Seven Sacred Pauses: Singing Mindfully from Dawn Through Dark," a companion CD by Velma Frye, will be available for sale, as will Sister Macrina's other six books.