Ladies of Charity want to open learning and family center 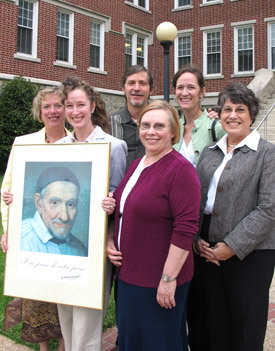 Kristy Eanes was inspired by the work she had done with the Vincentian priests based in North Little Rock and she wanted to support them more.

"They are just holy people, focused on their mission and I liked that," she said. "I like to work with people who are focused and they have a purpose to evangelize to the Hispanics. I also enjoyed the people they work with because they are very spiritual people. I felt very at home."

Eanes, network administrator for the Diocese of Little Rock, was asked by Father Tom Stehlik, CM, to establish a computer lab at the former St. Theresa Chapel in Little Rock in 2006. There she learned more about the religious orders started by St. Vincent de Paul and St. Louise de Marillac and their commitment to working directly with the poor.

Eanes' love of the Vincentians was also fueled by her discovery that the Sisters of Charity saved her grandmother when she was 1 years old in New York City in 1908, put her on the "Orphan Train" and relocated her to Subiaco. Eanes knew then that she wanted to formalize her commitment to the Vincentians.

As a married woman in her 30s, she discovered a nearly 400-year-old organization where she could serve the poor and spread the mission of St. Vincent de Paul. Internet searches led her to the Ladies of Charity, which the French saint started in 1617. The organization came to the United States in 1857, but no "branches" were established in Arkansas.

"It's the oldest Catholic lay organization of women," Eanes said.

With the permission of Msgr. J. Gaston Hebert, diocesan administrator, and the Vincentian priests and Daughters of Charity in January, Eanes began a branch in Arkansas, started recruiting members and searching for projects where women in central Arkansas could impact the lives of the poor.

Eanes said whatever projects the members choose, they must be done in the spirit of St. Vincent de Paul. Their mission is "to serve rather than be served, with humility, simplicity and charity." Ladies of Charity are known for physically caring for the poor and sick before attending to their religious needs.

"We try to do both, first the corporal (works of mercy) then they are more open to the spiritual. That is the purpose of our association -- to improve the lives of the poor in the state of Arkansas through education, empowerment and evangelization," she said.

The branch has about a dozen members and is assisted by Father Stehlik as the spiritual adviser and Sister Mary Lou Stubbs, DC, as sister moderator.

"They are dynamic, professional women and homemakers," Eanes said of the membership. Eanes said the members "were waiting for something to come along too. Everyone was very enthusiastic about joining up. That was really significant. It is really important to have energy like that, energy to do these kinds of projects. I am looking for women who aren't going to just do this for one day."

Sister Mary Lou, director of Catholic Charities of Arkansas, said as she speaks to young women in the state she is seeing more of an interest in groups like the Ladies of Charity. "I am picking up on a real hunger to be significantly engaged and impacting how people who are suffering can get assistance," she said.

The Ladies of Charity of Arkansas are "discerning" two projects currently. Their dream -- "the mother of all projects" -- is to open a learning and family center in central Arkansas. Partnering with other agencies, the one-stop shop would offer virtual English as a Second Language classes, babysitting, computer training, a community garden, alcohol and drug abuse assistance, job training and placement and health screenings.

A location for the center is currently being reviewed, Eanes said. Their goal is to get enough grants to operate the center from 8 a.m. to 5 p.m. daily.

"I have always felt the purpose of the Ladies of Charity is to empower the poor to help themselves to be individuals and stand on their own," she said. "With that comes dignity and permanent change. A very important component is the Lord, and the evangelization aspect of the Ladies of Charity very much appealed to me. We are to be a light of Christ in their lives."

Eanes said she is not deterred by the scope and magnitude of opening a learning center. "The Ladies are called to be visionaries in their communities. I love the word visionary. Doing something avant garde, something to fill a void, to do something different and positive," she said.

As a volunteer organization, the Ladies of Charity will be light on meetings and paperwork and heavy on service and action. For young mothers who work or care for their children full time, Eanes said they can choose their own projects that benefit the poor. She said one example for those members might be knitting baby blankets and clothing for other charities.

"We are so new that we are just getting our ideas together," she said. "We will only meeting as needed."

Eanes said she does expect to host at least one retreat a year and offer other opportunities to learn about the Vincentian charism.

Eanes is serving as president of the branch. Other board members include Sandy DeCoursey, executive vice president; Jackie Kaufman, treasurer; and Jan Brass, secretary.

All women in Arkansas are invited to join, whether they are Catholic or not. The annual membership fee is $15, of which $2 is sent to the national office in St. Louis. To join or more information, call Eanes at (501) 603-0128, e-mail , or visit http://www.lcark.org.