A Humble, Faithful Servant for Arkansas

Bishop Anthony B. Taylor wants his ministry in Arkansas always to be inclusive of those who are marginalized in society: the poor, immigrants, death-row inmates and abused women. He is following the path paved by famous and not-so-famous Catholic leaders who led with courage and faith. 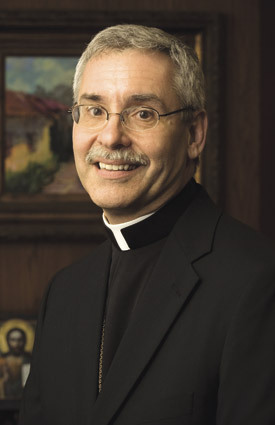 As Bishop Anthony B. Taylor prepares for his episcopal ordination June 5 at the Statehouse Convention Center in Little Rock, he often uses the word "courage" to describe his role models and how he hopes to lead the diocese.

"It's something I need, but I can't claim to it," he told Arkansas Catholic during a visit to Little Rock April 29. "For anyone who follows Christ there's a price to pay. If I only had my own strength to rely on, there is no way I could do it. In Christ all things are possible."

He doesn't know what courageous acts he will make or what will be asked of him leading the state's 116,000 Catholics.

"I don't claim to know the answers to problems of the Church in Arkansas," he said. "I need to find out from you all what's your reality here, what the Gospel requires of us here and now. I don't want to give people the idea that I have an agenda. I didn't even know I was going to be bishop until just recently."

He knows he wants to serve those who have "humble circumstances."

"Jesus' preferential love of the poor and marginalized was courageous, not timid, and so also must we be if we are to be his faithful servants. Not to the exclusion of anyone else but in recognition that those with the greatest need have the greatest claim on us," he told the media and diocesan employees during an April 10 press conference at St. John Center in Little Rock.

His mentors in faith and leadership include three familiar names -- Pope Paul VI, Pope John Paul II and Blessed Mother Teresa. Father Stanley Rother, an Oklahoma priest murdered while serving in Guatemala, is largely unknown outside Oklahoma, but someone the bishop wants Arkansans to know.

Pope Paul VI served the Church during Bishop Taylor's high school, college and most of his seminary years. He died in 1978.

"He wrote some very courageous things in his encyclicals and soon became very unpopular in the press and yet he was doing what he believed was right," he said.

"I was really touched by him visiting in prison the man who tried to take his life," he said.

He also liked the pope's courage in establishing Vatican relations with Israel.

"He broke with custom with some matters, leading a worship service in a synagogue," he said. "He was a person that, when he was convinced that something was the right thing to do, he would do it, knowing full well that there could be a price to pay."

Growing up in Poland during World War II, the pope knew the destruction caused by Communism.

"You really can't compromise with evil," the bishop said. "There is no way you can do that and still be faithful to the Lord."

Bishop Taylor said he admired Mother Teresa's commitment to issues related to human dignity as well as her recognition for "the worth of the human person, the claim of those who are most needy upon us."

Bishop Taylor has a special bond with Father Rother, whom he only met once.

In September 2007 the Archdiocese of Oklahoma City opened the canonization process for the priest who served among the poor in Guatemala until his death in 1981. Bishop Taylor, who is fluent in Spanish, was named the episcopal delegate and was responsible for conducting 35 interviews with people who knew Father Rother.

In spite of threats against Father Rother's life, "he didn't abandon his flock at a time when there were people being oppressed."

"When the Church in Arkansas has someone oppressed, it is easier to pawn the abused woman off on someone else, or not raise a ruckus about immigration or whatever, but that is abandoning your flock," he said. "They didn't crucify Jesus for nothing. (Father Rother) was very prudent. He didn't go looking for a fight. When the wolves were after his flock, he knew he had to be with them."

For the past several years Bishop Taylor has coordinated assistance to Santiago Atitlan, Guatemala, which the archdiocese continued to oversee until 2001. Since that time, local Catholics have supported the parish, school, hospital and now a proposed alcohol abuse treatment center. The bishop has visited Guatemala several times to interview witnesses who saw firsthand Father Rother's martyrdom or his heroic virtues.

Bishop Taylor will reflect on Father Rother and his other role models when he collaborates with parishes, schools, hospitals and other organizations that are working on social problems in today's world.

"God can use any of us, with all of our traits, for his purpose," he said.

Courage will likely be needed when he addresses controversial topics, such as abortion, the death penalty and immigration.

"I am collaborative, working together for the future of the Church," he said. "I will try to bring the voice of the voiceless to the table in discussions we have -- to make sure those concerns are heard."

He also wants his episcopacy to be about loving and sharing with the Catholics of the state.

Serving in a parish was Bishop Taylor's goal when he decided in 1974 to enter St. Meinrad Seminary in Indiana and then at North American College in Rome. He expected to do the typical pastoral duties, such as writing homilies and preaching at Mass, preparing parishioners for sacraments and working with parish groups.

"I wanted to work with parishioners, especially the poor," he said.

His calling has not changed much since that time.

"I want to help people grow in their faith and their relationship with the Lord. I want to nurture people's faith. I want to empower people to live their baptismal call," Bishop Taylor said.

Following his ordination in his hometown of Ponca City on Aug. 2, 1980, he started working at an inner-city parish, Sacred Heart Church. One month later he celebrated his first Mass in Spanish, relying on his high school and college courses to get him through. In 1982 he was assigned to care for Catholic churches in western Oklahoma, including Sayre, Clinton and Hinton. He was responsible for Hispanic ministry in five counties.

As someone who loves languages, he can also speak Italian, French and German and can read Latin, Greek and Hebrew.

He went back to school in 1984 to earn his doctorate in biblical theology at Fordham University while serving at a parish in the Bronx borough of New York.

"Much like in Arkansas we (in Oklahoma) are in the Bible Belt ... I saw it as being very helpful for preaching, growing in knowledge and understanding of the Word," he said.

Following his graduation in 1989, he returned to parish work and he was appointed the archdiocese's vicar for ministries, overseeing at one time or another the continuing education of priests, formation for new priests and foreign priests, and diaconate formation.

"I viewed myself as a brother to support them," he said of his work with other archdiocesan priests.

He was also instrumental in other archdiocesan business. Until his episcopal appointment, he was chairman of the Presbyteral Council, Personnel Board and Retirement Board. He was also a member of the Finance Council and Mount St. Mary Academy board of trustees in Oklahoma City.

In April and May, Bishop Taylor remained busy, wrapping up business at Sacred Heart Church and saying farewell to parishioners he has met over the past 27 years. He attended three services in Washington during Pope Benedict XVI's visit, went on retreat and made one more visit to Guatemala. He also reflected on the previous bishops who led the diocese for 165 years. He admired the humble actions of Bishop Albert Fletcher who integrated the Catholic schools and hospitals and Bishop Andrew J. McDonald who supported charities that worked for the sanctity of human life.

At his press conference April 10 in Little Rock, he closed by saying, "All six of my predecessors reached out to the humble of their day, the people of humble circumstances of their day with special love and commitment. ... And I pray to God that the Lord will make me as good a shepherd for the Church and people of Arkansas as those on whose shoulders I now stand."