Spiritan priest gives back after missionaries evangelized him 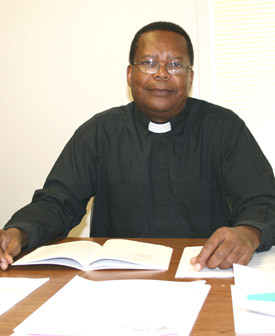 Jodie Hightower
Father Gregory Mallya, CSSp, celebrated his 25th anniversary as a Spirtan priest June 8 at St. Joseph Church in Conway. Father Mallya has served as a missionary priest in Africa and the U.S.

Jodie Hightower
Father Gregory Mallya, CSSp, celebrated his 25th anniversary as a Spirtan priest June 8 at St. Joseph Church in Conway. Father Mallya has served as a missionary priest in Africa and the U.S.

CONWAY -- Father Gregory Mallya, CSSp, celebrated his 25th anniversary as a priest with Mass and a reception on June 8. Ordained in 1983, Father Mallya has spent his priesthood as a missionary serving in Tanzania, Uganda, Kenya and the United States.

Father Mallya, a native of Tanzania, was introduced to the priesthood by the Spiritan fathers who served his home parish.

"The Holy Ghost priests first came to my country in 1865 as missionaries," Father Mallya said. "They built schools, health centers and the church."

Father Mallya said the priests taught him about God, life and the world, which other religions did not. He said other missionaries built churches, but did not focus efforts on education.

"I knew early that I wanted to be a missionary priest," he said. "As a missionary, life is hard, but we learn to adapt."

Father Mallya had support from his family as well. He has a large Catholic family including three cousins who are priests and one who will be ordained this month.

Father Mallya's first assignment after ordination was in Zambia. He spent six years in that country first as assistant pastor and then as pastor in the Livingston Diocese.

In 1989, Father Mallya attended Duquesne University earning a master's degree in spirituality. Father Mallya returned to Africa and spent three years as the treasurer for the East African Province of the Holy Ghost Fathers. Part of his role was to raise funds to send men to seminary.

His education was not finished though and Father Mallya returned to Duquesne University in Pittsburgh, earning a master's degree in theology.

In 2000, Father Mallya went to Houston, Texas, as co-pastor of a parish there. Then in 2001 because of his father's failing health, he returned to Africa serving as pastor in Nairobi, Kenya. From there, Father Mallya went to Kampala, Uganda, and spent three years as a chaplain. Now Father Mallya has just completed a sabbatical program through the Oblate School of Theology in San Antonio.

He arrived at St. Joseph Church in Conway on Dec. 15 to serve as temporary pastor until Father George Spangenberg, CSSp, arrived in March. Now he is associate pastor and helps where needed at the parish.

"The people are very good here," he said of his new surroundings.

Father Mallya said that he has learned to value the differences in the various cultures he has been exposed to in the past 25 years.

However, Father Mallya said he does miss the sense of community he felt in Tanzania, but adapting to change and learning continuously is the reality of missionary life.

"Part of being a missionary is that I will take you as you are and not try to change you," he said.

The United States is very different from Father Mallya's home country of Tanzania. He said his town sat in the shadow of Mount Kilimanjaro and many people do not have electricity or running water.

He said the closeness brings with it a strong community that cultivates vocations.

"Being a missionary is different than being a diocesan priest," he said.

In his spare time, Father Mallya said he likes to read and watch sports, particularly soccer and football.