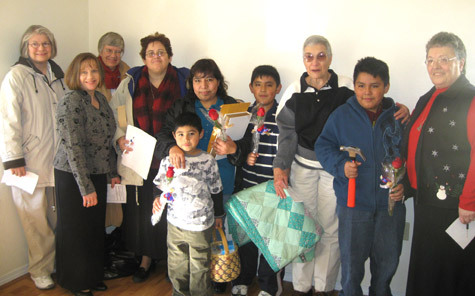 Sister Therese Moreno, OSB, program coordinator at the center, saw that the hardworking mother of three boys would make a good homeowner herself. As part of the Family Selection Committee for Arkansas Valley Habitat for Humanity, Sister Therese realized that the native of Mexico might qualify to become a Habitat partner, earning her home through 400 hours of "sweat equity" and encouraged her to get started with the application process in October 2007.

"After a family files an application, the Family Selection Committee checks their credit and references," Sister Therese said. "People need to have lived in this area for one year and have a steady income that falls within the low-income guidelines. If they are approved for the next step, a home visit is made to see if their current housing arrangements are substandard or too crowded for the family's needs. If they pass that step, Habitat approves their application, and they enter into a contract to earn their home through sweat equity hours.

When Habitat held Saturday work days beginning in March, Torres was there, even though she had to get babysitters for her three boys, Ismael, 10; Misael, 9; and Isaias, 6.

"Sometimes I would get discouraged because I didn't think I could come up with the 400 hours, but people came together to help me," she said.

The Benedictine sisters held two work days to help her and enlisted the Catholic Campus Ministry at the University of Arkansas at Fort Smith to contribute work hours as well.

Four hundred hours, earned eight hours at a time on Saturdays, doesn't move quickly, but with the goal in sight, other Habitat families whose hours were completed came and helped and enlisted their churches to finish Torres' home.

When the Torres family had its housewarming Jan. 11, other Habitat families in the neighborhood joined the Benedictine sisters, representatives of other churches, Fort Smith Mayor Ray Baker and the Habitat staff in celebrating.

"It makes me so happy because we are going to have our own house where I can raise my kids and don't have to worry about them," Torres said, smiling through tears.

The sturdy Habitat home has an inviting front porch, a sunny living room with wood laminate floor, fully equipped kitchen, two baths and three bedrooms. Ismael, the oldest son, took guests on a tour of the house, pointing out where he and his brothers would sleep and how he wanted to lay out his room.

Jay Poppe, executive director of Arkansas Valley Habitat for Humanity, presented a Bible to the Torres family. He noted that Habitat's ministry was based on the conviction that everyone must reflect Christ's love in their own lives by loving and caring for one another.

"Like all of our Habitat families, Carmen and her children will enjoy the advantages of affordable home ownership and a simple, decent place to live. She will also become part of the low-income housing solution by paying her monthly mortgage which 'pays forward' into creating homes for future Habitat partner families," Poppe said.

Three completed Habitat for Humanity homes now stand on Torres' block in north Fort Smith. Their residents have formed a community, helping one another and committing to assisting new families earn Habitat homes. Habitat plans on building six more homes in the River Valley in 2009.

The Torres family moved into their new home on Jan. 17. After 15 years in the United States and 31/2 years working in St. Scholastica Retreat Center, Carmen Torres and her three sons had finally earned a part of the American dream.