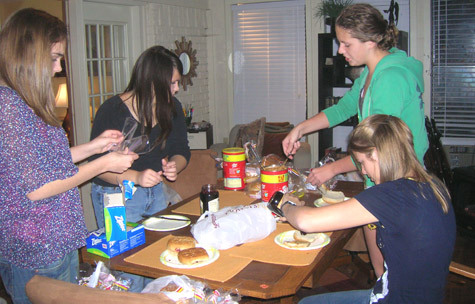 TEXARKANA -- Every weekday morning at 9:30 a.m., someone opens the front door of St. Edward Outreach Center. Hungry people are already waiting on the front porch of the frame house. They silently file into the hallway and line up for the only food some of them will eat that day.

People keep coming until the front door closes at noon. The outreach center is operated by St. Edward Church and is located not far from the church.

On a recent morning, Bobbie, a 73-year-old woman who has been coming to the outreach center for several years, told Arkansas Catholic, "I appreciate the help I get here. I have had knee surgery, and a tree fell on my son and then he had to have surgery. I have to buy medicine for me and my son. I had to file for bankruptcy. I need whatever help I can get. Sometimes I bring my son in with me. He walks slow; there are pins in his knee."

The outreach center is run by two paid employees, director Teri Wilson with assistance from Brandon Glover. Wilson said, "Anybody can come and get a lunch, and no questions are asked. Everywhere else in town, people have to meet certain requirements before they can eat there. Also, the other agencies don't serve every day. We do.

"We are staffed by volunteers. Each has their designated day to come in, and they all show up. We couldn't do it without the volunteers. We are supported by donations from this church (St. Edward) and from donations from Sacred Heart Catholic Church and First United Methodist Church."

Wilson noted that recently an increased number of people are showing up at the outreach center because of economic hard times.

"In March we served lunches to 2,800, an increase of 743 over February's numbers. With the deepening crisis in the economy, we are seeing people who have never needed our services before."

Food is supplied to the outreach center by Harvest Texarkana, a local agency, and by volunteers who often bring sandwiches they make at home (or they make them at the center), boiled eggs and fresh fruit. Many from St. Edward Church donate their empty grocery bags. Needy people coming through the line take a bag, fill it with food and eat it elsewhere.

Only lunches are served, and they consist of prepackaged sandwiches, hamburgers or sandwiches made by volunteers. In addition, Harvest Texarkana always donates packaged desserts, such as cookies and candy. The staff and volunteers enjoy preparing extra treats and gifts on special holidays, such as Christmas and Easter. Anyone is welcome to fill their bag with lunch items each weekday but may not go through the line twice in one day.

Several of those who eat daily at the outreach center are homeless. Most, though, have a roof over their heads but not enough income. For example, Jessie, a 20-year-old who comes for food, said he has a part-time job but the pay is not adequate to meet all his needs. Jessie often helps Brandon Glover unload the food truck and gets a little extra food as a reward. He said of the outreach center, "I appreciate it. I thank God for everything I do have."

He said he has applied for an additional job and hopes to be holding down two jobs soon.

George, an older man who has a job, said, "I've been coming three or four years. Usually I don't eat no breakfast. This helps out a whole lot."

And John, in his 50s, said, "With the hard times, this helps me out. I have full-time work but still need extra help. This is a real nice place. I like it and I hope they continue to serve the community."

James, also in his 50s, nodded when he heard what John had to say. He added, "People around here do appreciate it. We are thankful for having a place like this to come to."

Volunteer Judy Geraci has noticed that most people are grateful for the food. She said, "What touches me is when we ask them how they are doing and some of them say, 'I am blessed.' I wish we could do more for them."

Geraci, who volunteers on Mondays, said that one day Harvest Texarkana brought cakes in to be distributed. One of the cakes was decorated with a tractor on top.

"This family that had never come in before came in that day," she recalled. "We told them to pick out a cake. Their little boy's eyes got big when he saw the cake with the tractor. They picked that cake. I was just walking on cloud nine the rest of the week."

Geraci added, "It is a blessing because I am able to help people. I get more out of it than they do."

"The outreach center is based in the Scriptures and also in the teachings of the Catholic Church," he said.

Father Flusche quoted Matthew 25:31-46, where the king separates people as a shepherd separates the sheep from the goats, placing some on his right and some on his left.

"Then the king will say to those on his right, 'Come, you who are blessed by my Father. Inherit the kingdom prepared for you from the foundation of the world. For I was hungry and you gave me food, I was thirsty and you gave me drink, a stranger and you welcomed me ..."

"Pope Pius XI called for the reconstruction of the social order based on the principle of subsidiarity," he said. "Subsidiarity means that things should be done on the lowest level possible. That is what we are trying to do here at St. Edward's, to take care of the poor on the lowest level possible. It is a matter, really, of human rights, not a matter of charity. What we are doing is a matter of social justice, not a matter of charity."

Along with Father Flusche, those who help the needy who come to St. Edward Outreach Center never forget the words of Jesus: "Whatever you did for one of these least brothers of mine, you did for me."