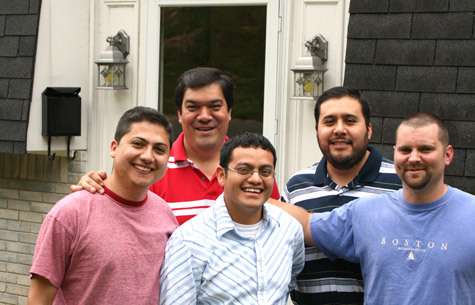 The Diocese of Little Rock has opened a house of formation for seminarians who are studying or working in Little Rock.

Msgr. Scott Friend, vicar general and vocations director, said the diocese is renting a four-bedroom home in the Leawood neighborhood to provide a permanent place instead of living at a rectory or staying at St. John Center. The house of formation will also allow the men an opportunity to form friendships and community.

"We are really liking the house setting," he said. "It's all a part of developing a sense of community and brotherhood. It's a place or space that they can say this is our home."

Msgr. Friend, who also lives in the house, said the seminarians come together daily for prayer and meals. Their day begins around 7:15 a.m. with the liturgy of the hours. About 5:30 p.m. Msgr. Friend celebrates Mass and one of the housemates is chosen to prepare the meal.

Msgr. Friend said he has also been able to spend more time with the seminarians and help in their formation.

"I always experience a bit of sadness when they go back to school," he said. "Ideally it would be better if they were all here (in seminary in Arkansas.). But we are not able to do that - yet."

Three seminarians are taking classes at the University of Arkansas for Medical Sciences to learn about hospital chaplaincy. They are Deacon Rubén Quinteros of Little Rock, Juan Manjarrez of Fort Smith and Jason Sharbaugh of Morrilton.

When the five seminarians return to school in August, Msgr. Friend said there will be at least another five men living in the house. Most of the housemates will be accepted as seminarians, but they will need more time in Little Rock to improve their English. Some of the seminarians are coming from other countries and need to spend at least a year living in Arkansas, learning about the state and diocese, he said. Msgr. Friend said they can begin taking some of the freshman courses at UALR and transfer them to a seminary at a later date.

The house also will be a place for prospective seminarians who are discerning, Msgr. Friend said.

"Some of them might not be ready yet to enter the seminary, but they want to take the next step. They really want to spend a year discerning if this is what they are called to do." he said. "They can develop a sense of community and learn to do prayer."

Currently the house is furnished with lots of hand-me-downs, Msgr. Friend said. The priest is lending much of the furniture he has been given as well as unused beds and dressers from Fletcher Hall at St. John Center and other furniture from St. Joseph Home in North Little Rock.

Msgr. Friend said the house will always be available to any of the seminarians while they are in Little Rock, whether they are visiting for a special event, such as an ordination, or they need a place to stay during Christmas break.

Manjarrez, who is completing his clinical pastoral education at UAMS, said he has enjoyed meeting the other seminarians who attend other seminaries or are from other countries.

"It has been a good experience," he said. "I enjoy living with the other seminarians."

Manjarrez describes the house of formation like a typical home.

"On the weekends, we clean up the house or go out to eat or watch movies," he said.