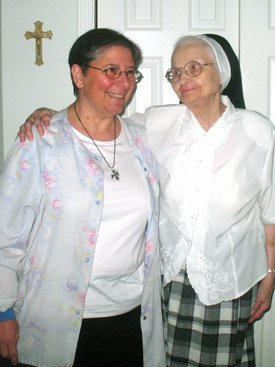 FORT SMITH -- Moses heard God speak through a burning bush. Sister Cecelia Brickell, OSB, heard him speak through the voice of a teenage boy in her religious education class at St. Mary Church in Helena in 1995.

"Sister Kimberly (Prohaska) was visiting our class to talk about vocations," Sister Cecelia said. "She asked the class if they knew anyone who might be a good sister, and one of my students, Philip Gattas, said, 'Miss Cecelia would make a great sister.' I really heard God speaking to me when I heard what Philip had said. I took a few weeks to pray about it, and after that I began researching different orders. There were things I liked in all of them, but when I read the Rule of Benedict that's what hooked me."

Sister Cecelia, who had been married and divorced and was the mother of an adult daughter, Jenny, didn't know that it would be possible to become a sister, although she had sensed for a number of years that God wanted something more from her than her participation as a Eucharistic minister, religion teacher, youth leader, choir member and lector.

"My spiritual director, Father Ed Graves, had suggested that I get away for more than just a weekend to be still and listen (to) what God had to say to me," Sister Cecelia said.

She went on a private retreat at Hesychia House of Prayer in New Blaine and heard God say, "I love you. I have a plan for you. Trust me. My time is not your time."

Shortly after the retreat, Sister Cecelia's mother became ill, and she tried to spend as much time with her parents as her work schedule permitted. After her mother died in 2002, Sister Cecelia realized that perhaps God's time and hers were starting to coincide.

When Sister Cecelia completed her discernment process and told her family that she was going to become a Benedictine sister, her father wasn't surprised, but her daughter was.

"Jenny's reaction was adorable. I called her and asked her what she would think if I entered a religious community and there was this big long silence," Sister Cecelia said. "Finally I said, 'Jenny, are you there? Are you OK?' Jenny answered, 'Yeah, but I'm glad I'm sitting down.'"

Then Jenny told her mom, "Whatever makes you happy makes me happy."

After Sister Cecelia applied to St. Scholastica Monastery, she waited to receive her marriage annulment and pay off some debts incurred while financing her daughter's college education. She entered the community in January 2005 and made her three-year temporary profession on June 24, 2007.

While she was in formation as a postulant and a novice, Sister Cecelia, a registered nurse, began attending the Little Rock Theology Institute to complete her bachelor's degree in theology through St. Gregory University in Shawnee, Okla.

"It's been a real blessing and a wonderful program," she said. "They have incredible teachers flying in from all over the country who really love what they do and love the Lord. I have learned so much not only from my teachers but from my classmates."

She expects to complete her degree in 2011.

She also attends weekly classes in the Holy Rule with the prioress, Sister Maria DeAngeli, and works in the third floor monastery infirmary with the oldest sisters, St. Scholastica's "wisdom women."

Sister Cecelia, who will make her final monastic profession on June 24, 2010, said that life as a sister has had its blessings and challenges.

"One of the things that brought me to the Benedictine way of life is the continual focus on growth and conversion," she said. "One of the challenges was learning to live with more than 60 unique personalities and interact with them. I thought that since I had grown up with four brothers and sisters, I would find that easy, but it's a big shock. I am surprised at how much I've learned about myself. I always thought I was a good listener but I'm surprised by how much I didn't hear."

She advises others who feel they might have a call to religious life to "be open, listen. When that peace fills your heart, you'll know you have your answer."