'Michael Stone' inspires others to persist in the face of adversity 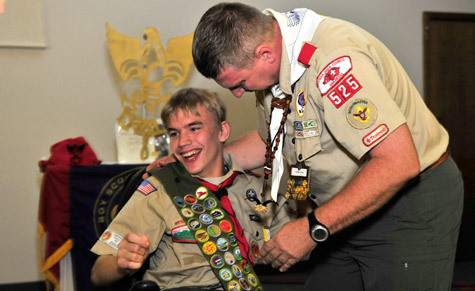 BENTONVILLE -- Sept. 21 marked a giant milestone for Michael Swisher, a member of Boy Scout Troop 525, when he was presented with his Eagle Scout Award at St. Stephen Church in Bentonville.

In spite of living with cerebral palsy, the 18-year-old Swisher has set an example for other scouts, their families and the whole community with his latest achievement. A large audience filled the community room of the church for the Eagle Court of Honor, where his fellow troop members and leaders gathered to recognize his accomplishments with the Eagle Scout medal, badge and certificate.

Starting in Cub Scouts at age 6, Swisher has been actively involved in the Boy Scout program. His former Cub Scout leader, John Baker, said Swisher eagerly participated in all the activities, including fishing, racing derbies, bowling and tag games with rest of the scouts. One year Swisher, as a Cub Scout, led the Benton County Fair parade with flags draped over his wheelchair.

"Michael, everything you have done has inspired me," Baker said.

At 11, Swisher "crossed over" into Boy Scouts where he met his new troop leader, Dennis Lowe.

"Dennis Lowe has been instrumental in Michael's success in scouting," said Michael's mother, Gail Swisher. "Dennis never said, 'can't do' and he never gave up. If there was something Michael wanted to do or try, Dennis would figure out a way to get it done."

Another person instrumental in Swisher's success is his father, Brian.

"Brian will not take credit, but he has been on every outing, every hike, every event with Mike," Gail Swisher said. "Without these two men, Michael would not have been able to achieve his goal of reaching Eagle like my brother."

Swisher's older brother, Daniel, 23, is also an Eagle Scout. At the ceremony Sept. 21, he escorted Swisher up to the stage to receive his medal, badge and certificate.

In Lowe's presentation, he said the "Michael Stone" has become a tradition for his scouts. Through his outdoor training with Swisher and other scouts, Lowe has created a gift to give to the boys to inspire their efforts in scouting.

"When we head out on an adventure, we give each participant their Michael Stone, a cord necklace attached to a small stone," Lowe said, "This is to remind them and help them when they hit mental or physical hardships that often happen on these extremely difficult treks. They have their Michael Stone to remind them of the example Michael has set for all of us each and every day. But what I didn't realize was that most of them hardly ever take their Michael Stone off, even after they return to the day-to-day grind of the trek we call life."

In addition to earning 36 merit badges to gain his Eagle Scout rank, Swisher was required to do a service project. Under his direction, he spent 343 hours and involved 36 other scouts to design and construct a pavilion for Camp Barnabas in Purdy, Mo. The Christian camp for children with disabilities and their siblings is where Swisher has spent his summers since he was 7 years old. The work also included building a one-quarter mile of trail and making it wheelchair accessible.

"Mike loves the fact that he can 'give back' to the camp," his mother said.

Gail Swisher, a nursing instructor at Northwest Community College in Bentonville, has served at Camp Barnabas for the past 11 years as camp nurse.

"I want to say that God in his infinite wisdom blessed us with Michael 18 years ago," she said. "He showed us his love by giving us his strength to rely on as we faced the many challenges over the years and then he showed us his mercy and grace as he sent each of the people in the room at this ceremony into our lives. Without them, we, nor Mike, could have made it where we are today. Scouting has kept Michael an active participant in his community, his church and his school."

Swisher is a senior at Bentonville High School where he is participating in job training to prepare for employment after graduation. He plans to continue in the troop as an adult leader and hopefully serve as a role model for younger members as they work to obtain their Eagle rank.