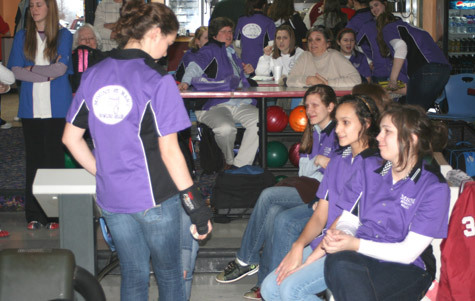 Sister Lisa Griffith, RSM, and Sister Joan Pfauser, RSM, thought it was too good an opportunity to pass up when no one initially volunteered to coach a bowling team for Mount St. Mary Academy, so they stepped up to the lane.

"When AAA first asked, there were no coaches available to do it," said Sister Lisa, who is the school's dean of academics. "We did not feel it was an opportunity that we should let go by. It does not cost the school anything; it is something good for the kids. So, we said we would do it.

"Now we don't want to give it up," she said. "I think part of why we haven't given it up is the kids see us in a different light, not in a classroom, not in administration. I think it gives them a different view on religious. I will go out and bowl with them. They see me playing with them and it is different, a whole different interaction. I really enjoy being with them and doing that."

Sister Lisa said bowling is a sport anyone can play for the rest of their life.

"I was not overly athletic in school or anything, but all of us can learn to bowl and you can play it forever," she said. "I enjoy being with them."

The team is composed of 15 members, including varsity and junior varsity players.

One senior, Madelyn Whitley, has been on the team four years. She said she became interested in bowling because a friend was a bowler and told her how much fun it was.

"I wanted to be part of a team to support my school, and I thought that a team run by two nuns would be a lot of fun," Whitley said.

The senior said she has learned to focus on the group more than the individual by participating.

"Being on the team has also helped me realize that there is more to life than winning," she added.

Sister Lisa said this is considered a rebuilding year because they lost a lot of starters last year.

Shannon Hathaway, a sophomore, joined the team this year. She too, became interested in bowling through a friend.

"I wanted to be active in a school activity and thought bowling would be a fun way to do that," she said.

"I learned that bowling is a team sport, but it is also about competing with yourself and trying to bowl a better game than your last," Hathaway added.

Franchesca Parenteau, another sophomore, said her family always went bowling and the interest carried on into high school.

"I joined the team because I wanted to be a part of a team and make new friends," she said. "From being on the team I have learned the values of respecting other people around me when I am in public, and I have learned so much about what it means to be a contributor on a very competitive team."

Senior Jessica Smith has been on the bowling team four years.

"I ran track fifth-eighth grade and was tired of that, can't play basketball, volleyball or softball, so I wanted to try to bowl," Smith said. "A friend of the family was a good bowler and he coached me and I got all into it.

"At the freshman parent meeting, after Sister Lisa got done talking about the bowling team, my mom asked me how well did I bowl. I told her I got over 100 each time. She then told me I should try out. I wasn't planning on playing any other sport at Mount so I could focus on my grades, but I tried out anyway and made the team as a freshman."

Smith said being on the bowling team has taught her more responsibility than any other sport would have.

Sister Lisa said the team can have up to 10 matches in the bowling season, which starts the week after Thanksgiving and ends in mid February. The Mount came in fourth at conference but is still uncertain of its ranking in the state.

"I think it attracts a different student," she said. "It is not one that has to be a typical athlete, or a preconceived notion of what an athlete is.

"A lot of it is a mind game, you are really competing against yourself, in a lot of ways, but it still is a team sport," Sister Lisa added. "If you can improve your score, everybody improves. The students who typically bowl are not in other sports."

Sister Lisa said her goal is to teach the girls to work together, relying on each other and learning how to critique each other in positive ways.

"They have a good time with each other, that is what keeps them coming back and trying out each year and it keeps us going with them," Sister Lisa added.

Other Catholic high schools with bowling teams are St. Joseph School in Conway and Catholic High School in Little Rock.