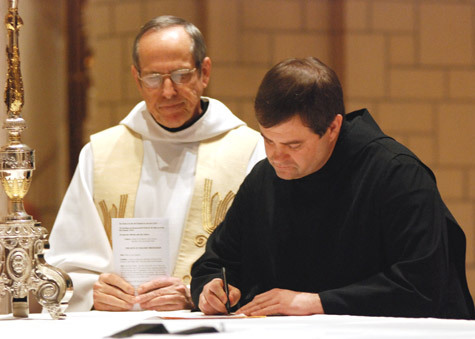 In 2000, Greg Boland took a pilgrimage to Rome. Now, 10 years later, Brother Patrick Boland, OSB, sees that trip as the beginning of a longer journey, which led him to Subiaco Abbey.

"It's amazing how God works in your life without you knowing it," Brother Patrick said.

On Feb. 2, Brother Patrick professed solemn vows as a Benedictine monk. This is the final step in becoming a permanent member of the monastery.

"To me, in my heart, I had made the decision, but it was the final closure of the process," he said.

Up until now, both he and the monastery were trying to see whether or not he would be a good fit, he said.

"It was nice to have part of my family and friends able to come," he said. "It was real special for me because it wasn't easy for them (to come)."

Getting to Subiaco from Pennsylvania, Georgia and Florida was difficult, particularly because of the ice storm that hit two days before the ceremony.

"Everyone was really impressed with the community and really amazed at how hospitable the monks were," he said.

Brother Patrick, 47, is originally from Northeast, Pa., a small town outside of Erie. After volunteering with youth groups and working in campus ministry at a Catholic high school in Macon, Ga., he started considering a vocation.

He came to Subiaco for a retreat in July 2003 and returned in July 2004 for a second vocations retreat. After this retreat he applied to join the abbey.

In September 2005, he became a candidate at Subiaco Abbey. Six months later, he became a novice, and on Feb. 2, 2007, he made his first profession as a Benedictine and took the name Patrick.

In addition to his prayer life, Brother Patrick has spent much of his time as a student since he arrived at Subiaco.

When he first became a candidate, he was asked to take classes at Arkansas Tech University toward an air-conditioning degree so he could help with maintenance emergencies.

Although he had never done that kind of work before, "the abbot asked me and I said I'd try," Brother Patrick said. "They have an outstanding program at Arkansas Tech. It worked out well."

This spring he will complete a bachelor's degree in professional studies with an emphasis in communications. He is also pursuing a theology degree through the Little Rock Theology Institute.

This fall he plans to go from student to instructor when he begins teaching seventh- and eighth- grade religion at Subiaco Academy.

Brother Patrick has lived a few different places since he left Pennsylvania, but he said the abbey is the first place he's been where he's experienced "that feeling of home."

"I even owned a home in Florida, but it never felt like home," he said. "Being here is like putting on an old shoe -- it just felt right, felt good."

"The longer I stay here, the more affirmation I receive," he said. "It's a good fit for my personality. Never a day I doubted I should be here. I believe it's truly God's will."