Four to be ordained: Grateful for the gift of the priesthood 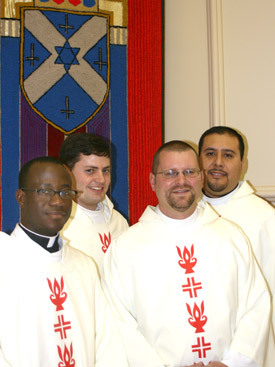 Malea Hargett
In anticipation of their ordinations, Deacons Joseph Archibong, Tony Robbins, Jason Sharbaugh and Rubén Quinteros participate in the Chrism Mass March 29 at the Cathedral of St. Andrew.

Malea Hargett
In anticipation of their ordinations, Deacons Joseph Archibong, Tony Robbins, Jason Sharbaugh and Rubén Quinteros participate in the Chrism Mass March 29 at the Cathedral of St. Andrew.

Tony Robbins, Joseph Archibong, Jason Sharbaugh and Rubén Quinteros come from different countries, cultures and languages. On the surface, it seems their personalities and interests differ as much as their life experiences.

Yet when they talk about God, how he has loved them, guided them and formed them for his priesthood, they all feel the same way: grateful for this wonderful gift.

Bishop Anthony B. Taylor will ordain these men at 10 a.m., Saturday, May 22 at Christ the King Church in Little Rock. It is the largest ordination the Diocese of Little Rock has had in 44 years. Another seminarian, Josh Stengel, will be ordained in July at Subiaco Abbey.

All four men are happy to be receiving the gift of holy orders together.

"Priesthood is an intimate sacramental brotherhood, which is enjoyed in communion. This is exciting to have a group of us," Jason Sharbaugh, 34, said.

"It will be a wonderful celebration of the diversity of our diocese with Joseph being from Nigeria and Rubén being from Argentina," Tony Robbins, 31, said.

It is an honor to share this blessing, said Rubén Quinteros, 33. "We walked together in this journey, so I'm really happy to share with them this moment."

"It reinforces the sense of brotherhood as priests and helps me to always remember and pray for my brother priests and seek to foster communion and communication with them," Joseph Archibong, 30, said.

'A bridge for the people of God'

Reflecting on his ministry, Robbins said he hopes he can be a "bridge for the people of God. I want to make God available for his people and help lead his people in becoming available for God."

"One challenge that concerns me is my patience with myself," he added. "My eagerness to be a good, holy and effective priest may cause me to not be as patient with myself as I need to be while getting used to life as a priest."

Robbins will celebrate his first Mass May 23 at Our Lady of the Holy Souls Church in Little Rock.

He studied Spanish in seminary and although his confidence in speaking the language isn't strong, he expects to learn fast as he regularly celebrates Mass and hears confession in Spanish.

Robbins said he also wants to help bridge the gap between cultures in the diocese.

"By our one baptism and our one faith in God, that is what brings us together, especially the Eucharist," he said. "That goes beyond any differences we have."

When Archibong thinks about the kind of priest he wants to be, the image of Jesus the Good Shepherd comes to mind. He wants to be compassionate, caring and understanding as he watches over the flock, and when necessary, "goes after the lost ones."

Archibong will celebrate his first Mass May 23 at Blessed Sacrament Church in Jonesboro.

One of the challenges he anticipates is getting to know the people he has been called to serve. "It will be challenging not because I am timid or withdrawn, but because I am still learning and adapting to the culture," he said.

Archibong has spoken English most of his life but the way it is spoken in Nigeria is much different from the United States.

"I know I have to learn to speak in some way that they can understand me," he said. "It wouldn't really make sense to say a homily that nobody understood."

'Whatever God wants from me'

Quinteros said his challenges will be finding a balance between prayer, ministry and his personal life.

Quinteros will celebrate his first Mass May 22 at St. Theresa Church in Little Rock. A second Mass will be celebrated May 23 at St. Raphael Church in Springdale. He has served at St. Raphael during his pastoral year before ordination.

He continues to learn the American culture and to speak English.

"They are already helping me a lot because they are very patient with me," he said of English-speaking parishioners at St. Raphael.

He has been giving homilies at English Masses twice a month at the parish. Afterwards he has received positive feedback and encouragement.

"Especially for us that came from outside the United States, it is very important to receive good comments," he explained. "It's really important for us that we're doing a good job. I really want to hear that, not for me, but because I'm trying to do whatever God wants from me, for the people."

Making a 'place to experience the love of God'

Regarding his gifts, Sharbaugh said he looks forward to teaching and sacramental ministry, especially reconciliation.

"I've always loved going to confession because I've always found it a very tangible way of experiencing God's mercy," he said. "I've always wanted to be able to be present to help people be able to do that."

Sharbaugh will celebrate his first Mass May 23 at Sacred Heart Church in Morrilton. One of his concerns as he enters priesthood is the "general state of priesthood and the Church in contemporary times."

When he was discerning a priestly vocation in 2002, the clergy sex abuse scandal broke in the American Church.

As a new priest he said he is concerned about his ability to be effective to those who have lost faith in the priesthood.

"If there's a sense of being open with people, at least in healthy dialogue with the faith and having reasonable discourse, I think there can be a sense of making, not only the priesthood something that's more trustworthy, but that the environment of the Church is also somewhere where people want their children and their wives and their husbands and parents to be. That they know it's a safe place to experience the love of God."

To learn more about each of the men who will be ordained, see the special vocations section in the May 22, 2010 issue of Arkansas Catholic.