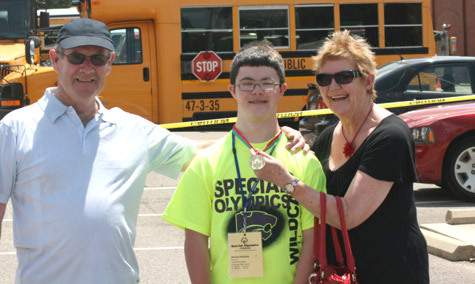 Grandparents Frank and Norah Cairney of St. Margaret of Scotland Parish in Stirling, Scotland, celebrate with Michael McKinlay following his win in May.

Grandparents Frank and Norah Cairney of St. Margaret of Scotland Parish in Stirling, Scotland, celebrate with Michael McKinlay following his win in May.

EL DORADO -- It's hard to know whether the move from London, England, to El Dorado, Ark., has had more of an impact on Michael McKinlay or whether he is the one exerting more influence on his newly adopted hometown.

McKinlay's winning streak has not slowed down since his family's move to Arkansas a couple of years ago with his parents, Marie and Thomas, and his older brother, Kevin. The 17-year-old is a member of Holy Redeemer Church and a Special Olympian with numerous medals to his name. He recently brought home the gold again during the Special Olympics Arkansas Summer Games, earning gold and bronze medals for long- and short-distance running, in what has become the largest sporting event for Special Olympics in the state.

Parishioners note that McKinlay, a recent graduate of El Dorado High School who was born with Down syndrome, exemplifies that rare gift of dogged determination combined with raw ability that supersedes any attempt to label him as disadvantaged.

During the Special Olympics Arkansas May 20-22, roughly 2,000 similarly determined competitors demonstrated their athletic skills in events such as bocce ball, power lifting, and track and field, competing in front of a crowd estimated to be several thousand strong. Another major component of the annual event was the Law Enforcement Torch Run, which had officials from Texarkana, Fayetteville, Fort Smith and Jonesboro meeting in Little Rock on May 20, then running to Searcy for the opening ceremonies.

"It is a wonderful part of the whole weekend," explained Marie McKinlay. "To see the dedication of so many people ... and then the awards ceremony for the athletes is another thing altogether. It is quite moving."

Special Olympics Arkansas held its first Summer Games in 1970, just two years after the Joseph P. Kennedy Jr. Foundation created the Special Olympics, as envisioned by activist Eunice Kennedy Shriver. The event has grown to a worldwide competition for those willing to train throughout the year to be vigorous athletes.

McKinlay said he felt "great" about having more medals to add to his collection of Special Olympics awards, though he expressed equal enthusiasm for several other interests that occupy his time, including an avid love for all things equestrian. One would be hard pressed to point to his Scottish roots since his bedroom is covered in patriotic hues of red, white and blue that blend well with the cowboy-themed accessories that fill it. McKinlay even rides a 13-year-old quarter horse called "Granny Bell" through a program called Equine Assisted Activity, which brings recreational, educational, and motivational benefits to enhance the quality of life for those facing intellectual or physical challenges.

Competitive bowling is another passion of McKinlay's, as seen in his third-place doubles win at the Arkansas State Championship Tournament. Holy Redeemer parishioners and 17-year-old twins, Anne and Beth Moses have bowled since 2003 and invited McKinlay to become a member of "Team Rocket" after he arrived in El Dorado. Both agree that his sweet smile belies his fiercely competitive nature.

"He is a bowl of sunshine," Beth Moses said, "but he's a good competitor, too. His smile and friendly nature misleads you."

Not that his competitive streak begins and ends with athleticism. McKinlay is also an El Dorado High School thespian. He won a second-place musical group award for his singing and stage skills at the Arkansas State Thespian Festival, held at Henderson State University in Arkadelphia in late January.

McKinlay has many other passions, but he expressed deepest affection for his family, especially his 20-year-old brother, Kevin, who serves as a lector at Holy Redeemer. During a visit at his home, McKinlay lingered over favorite photos, several which included shots of him next to Kevin during shared life events -- family weddings, confirmations and, of course, graduation.

"That's my brother," McKinlay repeated proudly, with a smile.

Marie McKinlay, whose move to El Dorado stemmed from Thomas McKinlay's job transfer, said she is thankful that the variety of Michael's interests has helped her family become acclimated to a new country, with so many new friends. It has meant increased involvement in the parish, as well as community and statewide activities.

"They have been active members of our parish since they arrived and we are very happy to have them," said Father Gregory Pilcher, OSB, pastor of Holy Redeemer.

"We've met so many people we might not have met otherwise and made wonderful friendships through Michael. I don't know what we would have done without him," Marie McKinlay concluded.

Knights of Columbus councils around the country have been active supporters of Special Olympics by raising funds and volunteering their time.

"Over the past 40 years, the Knights of Columbus has raised and donated more than $382 million to programs for people with intellectual and physical disabilities," according to the Knights of Columbus website. "Among the larger gifts of time and money the order makes annually is to Special Olympics and other programs for people with intellectual and/or physical disabilities."

Since 2005 the Knights have had a partnership with the Special Olympics and committed $1 million for four years to grow the programs and pledged more volunteers for local and state games.

On May 20-22 in Searcy, the Arkansas Knights of Columbus sponsored the Olympic Village to provide a place for athletes to relax between their scheduled events. A variety of games and activities were offered.