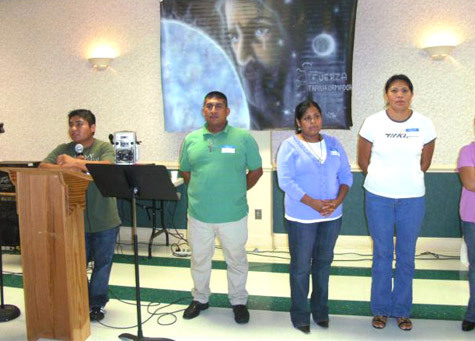 Juan Mota (at the lectern) is coordinator of Fuerza Transformadora at St. Edward Church in Texarkana. Also participating are Roberto Martinez (from left), Aracely Martinez and Belen Rivera.

Juan Mota (at the lectern) is coordinator of Fuerza Transformadora at St. Edward Church in Texarkana. Also participating are Roberto Martinez (from left), Aracely Martinez and Belen Rivera.

TEXARKANA -- Fuerza Transformadora, an organization within the Diocese of Little Rock, is proving to be a transforming force in the lives of many Hispanics.

Probably every participant would agree with St. Edward member Jorge Mendoza who said, "It was my way to find out more about God."

Fuerza Transformadora was founded in 2006 by Jaime Torres, and chapters exist in six Arkansas churches. The organization's website lists as one of its objectives: "Make known that Christ is among us and has called us to evangelize not with power but with great power."

In Texarkana the group is led by 22-year-old Juan Mota, who experienced God's transforming power in his life through the organization.

"When I was in Mexico I used to drink a lot and I didn't care about civilization," he said. "Then I saw, through Fuerza Transformadora, how God could change people's lives."

Mota has been a member of the Texar kana branch of FT for several years and has served as coordinator of the group for more than a year. Now a mature Christian, he has a strong desire to help others as he was helped. He said about the Texarkana group, "We talk about God together and grow in the faith. Our purpose is for people to grow closer to God, and we sponsor events to help them do that."

The Texarkana group meets twice a week to study the Bible and to share their walk in the faith. Mota and Roberto Martinez take turns leading the Bible study. And in addition to local meetings, Mota said FT offers five annual retreats in Little Rock where members' faith is strengthened and where they get leadership training.

Evangelism is a big part of Fuerza Transformadora, and the Texarkana group displays evangelistic zeal. A recent member, Ivonne Dillegas, said, "We know who does not go to church in our community. We go to people's homes and talk to people about Jesus. We look for people who do not go to church, and we invite them to Mass and to our meetings."

Everyone involved in Fuerza Transformadora has a personal testimony of transformation.

"We see how much God loves us and we understand why Jesus died for us," Dillegas said. "We don't want to go back (into sin) because it will hurt Jesus. We are human and we might fall again but we are going to try not to."

Dillegas, 32, said that since experiencing God's love, her lifestyle has changed.

She noted that a previous job had required her to work on Sundays, but she quit.