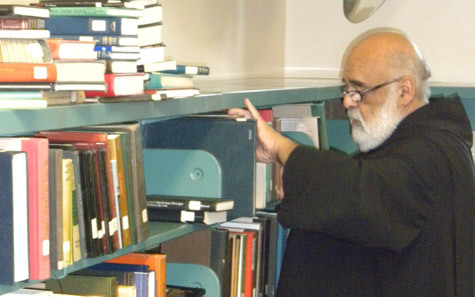 Father Aaron Pirrera, OSB, pastor of St. Benedict Church in Subiaco, looks through the shelves of the Subiaco library in August. The monk celebrated his 25th anniversary as a priest this year.

Father Aaron Pirrera, OSB, pastor of St. Benedict Church in Subiaco, looks through the shelves of the Subiaco library in August. The monk celebrated his 25th anniversary as a priest this year.

Father Aaron Pirrera, OSB, has spent most of his life following a call to teach and to preach. The 66-year-old, who is currently pastor of St. Benedict Church in Subiaco and a former headmaster at Subiaco Academy, celebrated the 25th anniversary of his ordination to the priesthood in August.

Born in Chicago and raised in Springfield, Ill., Father Pirrera knew from childhood that he wanted to be a priest. In high school, he said, he wanted to attend seminary, but his parents thought he was too young to make that decision, so he went on to college instead.

He also knew from an early age that he would enjoy teaching.

“I had excellent teachers in both elementary school (Ursuline nuns) and high school (Viatorian Fathers and Brothers),” he said. “They all gave a good example of what a good teacher was.”

After earning a bachelor’s degree in English and French at St. Ambrose College in Davenport, Iowa, he went into the Peace Corps, serving in Asmara, Ethiopia, from 1966 to 1968. He then returned to the United States, teaching school and earning a master’s degree in library science at the University of Iowa.

While teaching in Davenport, Iowa, in 1977, he read an article about the centennial of Subiaco Abbey and decided he’d like to visit. During his stay, he said, the 33-year-old met with several of the monks and felt very comfortable and welcomed. He entered the monastery the following year.

At the time, he had no family in the area, but presently has a nephew and niece living near the abbey.

Father Pirrera said he’s found little difference between being a teacher as a layman and then as a priest, but being a priest did bring an added dimension to the teaching role.

“The wearing of the habit was a good witness to the students,” he said, “and I feel that they would share more of their own personal life experiences with a priest than with a lay teacher.”

Between 1985 and 2001, Father Pirrera served at Subiaco Abbey and Academy in many ways: a teacher of English and religion, librarian, vocation director, formation director, development director, Coury House director and head of the English department.

In 2001, he became Subiaco Academy’s headmaster, a position he held until 2005, when he was called to become pastor at St. Benedict.

“When I entered the monastery, I never thought that I would be a pastor,” Father Pirrera said. “The transition from the classroom to the parish was not an easy one. It came at a difficult time in my life as my mother and only sibling died within three weeks of each other. The abbot (Jerome Kodell, OSB) thought that perhaps a change in assignment might be a help to me.”

As a priest, he said, “There is a special joy for me in baptizing and giving First Holy Communion.”

Many former students keep in contact with him, often calling or coming to visit when they’re in the area.

“Over the years, I have become very good friends with many of the former students,” he said. “Now it is interesting to have some of them as parishioners also.”

In the long run, being a pastor is not all that different from being a teacher, Father Pirrera said, because he still teaches the confirmation classes and leads a Scripture study and is a board member for St. Joseph School in Paris.

“It’s more like changing clothes than changing professions,” he said.