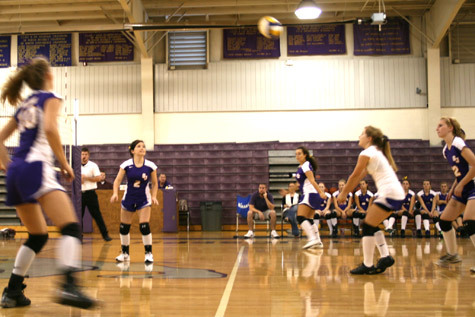 Jodie Hightower
Jessica (third from left wearing no. 2) and Jordan Justice (in white jersey), 17, seniors at St. Joseph School in Conway, make the most of their skills on the volleyball court against Perryville Oct 5.

Jodie Hightower
Jessica (third from left wearing no. 2) and Jordan Justice (in white jersey), 17, seniors at St. Joseph School in Conway, make the most of their skills on the volleyball court against Perryville Oct 5.

CONWAY -- With the 2010 volleyball season coming to a close, two seniors at St. Joseph High School in Conway are enjoying the fruits of their labors. Jordan and Jessica Justice, 17, identical twins, are making this their best year yet for the volleyball program at St. Joseph.

At just over 5 feet tall, the girls are not the typical volleyball player. Players tend to be tall in order to block balls at the net and to spike balls at opponents, said Luke Davis, girls’ volleyball coach.

Last season the team finished up with a 23-1 record, only losing one game, the state championship, to Mansfield.

This year the girls say they are ready to win the title.

“Mansfield had a pretty good team. After we lost two games, we gave up,” Jessica said. “We learned not to give up and that we can come back and win.”

Jordan plays “libero,” a defensive specialist who only plays back row and wears a different color jersey to note her position.

“She took that role pretty quick,” Davis said. “We discovered that whatever we hit at her, she could pass. That is rare.”

Jordan was named Best Defense last year and made All-Conference and All-District the previous three years.

Despite their height, Davis said the twins are the best servers with the most consistent record on the team.

“Jordan has very good court awareness. She knows where she is and where the ball is always,” Davis said. “They’ve been a blessing to me.”

This is Davis’ fourth year at the school.

“They helped me learn the game. Every team we play is impressed with them,” Davis said. “Those are two very big positions they play and these ladies will be hard to replace both as players and as people.”

The twins have played volleyball since the fourth grade and began playing at the Maumelle Community Center, their father Jack Justice said.

“They also played softball from the age of 5 through ninth grade, but they loved volleyball,” he said. “I loved doing that with the girls.”

Two years ago the girls played volleyball with the Junior Olympics, their mom Shara Justice said.

“We did a lot of traveling then. Almost every weekend we were going somewhere -- Dallas, Nashville,” she said. “I was kind of glad when they decided not to do that again this summer. The travel is exhausting.”

As for the future, Jordan wants to work with pre-school age children and Jessica is undecided. Neither of the girls have settled on a college, but said they hope volleyball will be a part of their experience.

“Our height gives us a disadvantage in playing for college, but I’m sure we’ll play if we make the team,” Jessica said.

Jack Justice said he will encourage his daughters to try out for a collegiate team.

“They might not make the team, but they at least need to try out,” he said.

Their distance from Conway means a 20-minute commute on Interstate 40.

“My biggest concern about them attending St. Joseph was the drive on the highway,” Shara Justice said. “I graduated from St. Joseph and wanted them to attend. We took a couple of test drives with us following them.”

The girls call their dad each morning to let him know they have arrived safely, Jack Justice said.

The volleyball season wrapped up with district games beginning Monday, Oct. 18 at Harding Academy in Searcy and state tournament begins Tuesday, Oct. 26 at Fountain Lake School in Hot Springs. The finals will be held in Bentonville Oct 30.

Jessica and Jordan have one older brother, Jack, 19, who regularly attends their games.