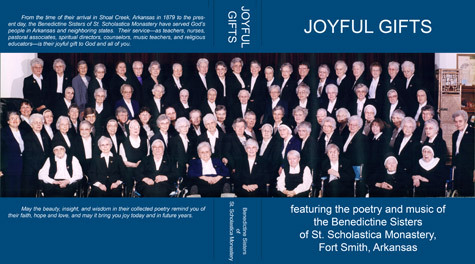 FORT SMITH -- As recently as 2004, when St. Scholastica Monastery in Fort Smith celebrated its 125th anniversary, the Benedictine community had so many sisters that their community photo could encircle a book cover from front to back.

Twenty-five sisters have died in the past six years. Three new sisters have made permanent profession. There are signs of hope and rebirth -- a new postulant joined the community in September, and there are more vocation contacts and more women in various stages of the inquiry and discernment process.

The sisters of St. Scholastica know that telling their story, in as many ways and through as many media as possible, is important for historical purposes and for the continuation of their Benedictine community and charism.

The Internet and smart phone technology have increased those storytelling opportunities -- through vocation videos, Facebook and blogs -- but there is something about poetry that lends itself to a book, bound and photographed, ready to sit on someone's night table offering bite-sized bits of reflective wisdom each evening.

"Joyful Gifts" began as a St. Scholastica Academy Alumnae project to be published in conjunction with their triennial reunion held in July. A committee composed of two alumnae and two sisters met in March to read and select 209 poems and nine pieces of music written and composed by the sisters over a 75-year period and match them with black-and-white photos from yearbooks, academy newspapers and photo archives. Because self-publishing is more affordable and fairly simple, the committee decided to publish the book on a print-on-demand basis.

The title, "Joyful Gifts" was taken from the poetry of Sister Consuella Bauer, OSB, the only surviving principal of St. Scholastica Academy, which closed in 1968. The cover photo chosen portrayed the order at its 125th anniversary in 2004.

Sister Macrina Wiederkehr, OSB, whose seven books on spirituality have been published by Harper Collins and Ave Maria Press, contributed 12 poems, many previously unpublished. Within these poems one can see how her own spirituality developed and changed with the passage of time.

Sister Consuella contributed 61 poems, written over a 40-year period, during which she served her order and the diocese as a teacher, principal, diocesan superintendent of schools and diocesan director of religious education. Her poems deal with many themes but all contain imaginative similes and metaphors precisely crafted into individual works of art.

Sister Bede Eckart's award-winning poetry reflects her interest in new forms and ideas. Five pages of "eye" poems -- collages with haiku cut word by word from newsprint and pasted on a scenic background -- reflect a trend that has now died out. Sister Christine Eckart, OSB, Sister Bede's sister, wrote a haiku as well, based on childhood memories.

"It has been one of the most rewarding projects that we have ever done because it took us so many years to do it, and we finally got it finished. It's a wonderful work of art," Sister Christine, a book committee member and poet, said.

The sisters' careers often gave them poetic inspiration, perhaps most evident in the work of Sister Madeline Clifton, who worked in pastoral care ministry in St. Edward Mercy Medical Center for many years. Her poetry relates stories of people in crisis.

Sister Louise Sharum brings her skills as a historian to each of her poetic Bible reflections. Sister Scholastica Vogelpohl, who taught high school English for many years, wrote with a teacher's mentoring voice in her poems about vocations.

The liturgical musical compositions of several sisters and the academy theme song, "All Hail, St. Scholastica" by Sister Mildred Dunn, OSB, showcase another charism of the sisters.

"Reverie, October 1998"
Shortly after "Joyful Gifts" was published, one of the authors, Sister Cordelia Lange, OSB, passed away at age 94. As the sisters and family shared their memories of Sister Cordelia, one of her poems, lovingly shared, reached out to comfort them in their loss.

"When Sorrow or Pain strikes
We each ask, 'Why?'
The answer doesn't come.
We whisper, 'God help us'
And -- He does
In ways we cannot comprehend
Faith, trust, and love
Refuse to die -- they grow."