Birth control, Hitler were popular newspaper topics in 1932 to 1934

Time Capsule 1932-1934A 33-part series on history mined from the first 100 years of Arkansas Catholic and its predecessors. 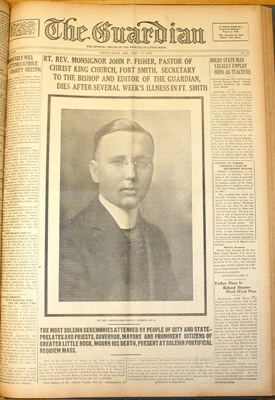 The death of Msgr. John Fisher at age 41 was front-page news in September 1933. He had been editor of The Guardian and the bishop's secretary.

The death of Msgr. John Fisher at age 41 was front-page news in September 1933. He had been editor of The Guardian and the bishop's secretary.

Marriage, divorce and birth control were common subjects of stories in The Guardian in 1932 to 1934.

During those times the Church could not imagine Catholics marrying someone who is not Catholic, getting divorced and using birth control to limit the number of children. One headline reported, "One wedding in six to end in divorce, U.S. survey shows."

In 1932 the evil of birth control was repeatedly mentioned in news articles. Margaret Sanger, a national birth control advocate, was quoted in The New York Times saying, "If the Catholics are going to make a religious war out of birth control, they will have to face the consequences."

While medical associations and many prominent Protestants were against birth control, people like Sanger painted the Church as the only opponent.

"The plea for fewer and better children, made in the name of modern eugenics and sponsoring compassionate marriage, divorce and birth control, constitutes the same offense which brought death and disaster upon the ancient cities of Sodom and Gomorrah, and if widely accepted will bring absolute ruin to our social system within the space of two generations," professor Dr. Paul J. Glenn said.

Following Pope Puis XI's encyclical on marriage, Casti Connubii, in 1930, the Church was speaking more against birth control. In the May 7, 1932, issue, it was reported that the pope said "contraceptive practices do not meet with favor in the most authoritative medical schools," and described the "danger that confronts nations when there is a decline in the birth rate."

Following the economic stress in the country along with more divorce and use of birth control, Bishop John B. Morris' annual Lenten pastoral letter in 1934 was on the topic of marriage.

"The past four years have, without doubt, been the most anxious of our entire history," he wrote.

Hitler and the Nazis

A new political regime took over Germany in 1933 and began to cause concern for the Catholic Church.

Two Catholic Center Party newspapers were suppressed and many public officials who were Catholic were dismissed or arrested by making statements against Adolf Hitler, who was appointed chancellor of Germany.

"Hitler's friends all say he is Catholic," according to a 1933 headline. The article detailed that he was born and raised Catholic, but it was questionable whether he still was Catholic.

In order to maintain peace and avoid religious persecution like was happening in Mexico and Spain, the Holy See and Germany began to negotiate a concordat. While the Catholic Center Party was deteriorating, the Vatican had hopes that it could work with Hitler.

In the July 22, 1933, issue it was reported that a concordat between Germany and the Holy See was signed, guaranteeing religious practices and protecting Catholic schools and religious orders. Pope Puis XI felt it was the right thing to sign the concordat to fight off "Bolshevism and godlessness" that was happening elsewhere.

"Germany would not disappoint (the pope) and that the new Germany was to be built on Christian foundations," vice chancellor Franz von Papen promised.

About six months later, it was clear that the concordat was "just a scrap of paper." In the Jan. 6, 1934, issue, it was reported that 1,700 "eugenic courts" opened in Germany to pass judgment on 400,000 men and women who were "hereditary defectives." Hospitals and prisons were ordered by the government to gather a list of criminals and "incurables" and sterilize them.

"It takes no prophet to predict that when it comes to a choice between God, his law and his book, and the mandates of Hitler, German Catholics will be on the side of right justice, virtue and religion," a March 1934 editorial in The Guardian said.

Negotiations between the Church and the Reich broke down after the Nazis restricted the Catholic youth movement and schools. Priests were put into concentration camps as political prisoners.

With the approval of the Industrial Recovery Act in June 1933, collective bargaining of unions was protected and the Public Works Administration was established. Following the passage of the act, one of the biggest questions was what would constitute a minimum wage. National Catholic, Protestant and Jewish organizations heartily supported the New Deal. Catholics supported it because it reflected many of the themes set forth by Pope Pius XI in 1931 when he issued an encyclical called Quadragesimo Anno ("In the 40th Year") to reflect on 40 years after Pope Leo XIII's Rerum Novarum. It was a landmark document about labor and treatment of the working class.

In February 1929 the newspaper quietly changed the name on the masthead to show Msgr. John P. Fisher as the business manager and did not list an editor.

But in 1932, it was reported that Msgr. Fisher was in fact the editor and was being given additional duties as pastor of Christ the King Church in Fort Smith. He would continue to spend part of the week as the editor of The Guardian and Bishop Morris' secretary.

Msgr. Fisher was the business manager "for a number of years" and then succeeded Father George McDermott as editor. In September 1933 Msgr. Fisher died in Fort Smith after having a "serious stroke." He was 41. It was an extreme loss for Bishop Morris and the diocese.

Changes began to appear in The Guardian in 1934.

Mussolini visits pope at Vatican to seal accord

314 priests left in Mexico in care of eight million people

First pilgrimage to Rome by plane planned in London

Memorial to Father Bandini is dedicated

Bishop appeals to theater owners to register complaints to producers

Many of Spain's clergy slain

Your first thought should be your figure. Entrust your figure to a Charis foundation garment.