Retiree from Kansas makes an impression on Hot Springs Village 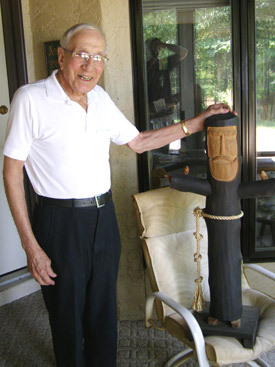 John Archibald
One of the artifacts Father Vic Bieberle will pack for his next move to the priest retirement center in Wichita, Kan., will be this 3-foot-tall likeness of St. Francis of Assisi, carved by a friend from Wichita years ago.

John Archibald
One of the artifacts Father Vic Bieberle will pack for his next move to the priest retirement center in Wichita, Kan., will be this 3-foot-tall likeness of St. Francis of Assisi, carved by a friend from Wichita years ago.

HOT SPRINGS VILLAGE -- Father Vic Bieberle may go down on the books as having the longest-celebrated 60th anniversary of ordination in recent memory. There have been Masses, thank you dinners, personal wishes and a June 21 Mass and dinner hosted by Bishop Anthony B. Taylor.

But this anniversary comes with a tinge of sadness. The man who served as a de facto assistant pastor at Sacred Heart of Jesus Parish in Hot Springs Village wants to move back to his home Diocese of Wichita in Kansas.

The pontoon boat has been sold. His house overlooking Lake Balboa is on the market. At 85 years old, Father Bieberle says it is important for him to be closer in distance to his family. Moving home also is a way to give thanks to the diocese that launched his career as a military chaplain.

"He always filled in when he was available," said Anne Dierks, a resident of Hot Springs Village and parishioner at Sacred Heart. "He has a very gentle spirit. He's a holy man and very eager to help."

Father Bieberle had every expectation on his ordination May 21, 1951, to become a pastor of a Kansas parish. He would enjoy the corn roasts, four seasons and Midwestern work ethic.

His bishop had other plans.

A commander of a Kansas National Guard unit let the bishop know he needed a chaplain. Most chaplains had to serve a parish for three years before becoming a military chaplain. One month after ordination, Father Bieberle learned the three-year rule wouldn't apply and he would become the needed military chaplain.

The wall of honor in his house shows the array of military medals and good conduct awards he received. For one assignment, he served with the 101st Airborne. He has the card noting his 101st parachute jump. Other assignments took him to Fort Campbell and Fort Bragg.

"I followed the troops," he said. "They were all volunteers. That made them someone special in my mind."

During his years in South Vietnam, Father Bieberle recalled the largest Catholic Mass he ever said and how it happened in a field accessible only by air. Father Bieberle served out of Hue on the northern border of South Vietnam. This particular Mass found him with special forces troops in the A Shau Valley.

"I was getting ready to say Mass when a young Vietnamese captain came. He spoke excellent English. He said his troops were out in the bush and had no opportunity to go to Mass and could they join us? I said I would be delighted."

"They sang the Mass," Father Bieberle said. "That is the tradition there. That was a very impressive few moments there. They had this deep faith. At that time this was '62, prior to the Vatican Council so I was praying in Latin and they were singing in Vietnamese."

Later, he joined a detachment of U.S. forces in the Dominican Republic. There were legitimate concerns that the 1961 assassination of Rafael Trujillo would produce a leadership void that could result in another Cuban Missile crisis.

Father Bieberle had an experience of starting to say Mass in a school. Gunfire broke out and he told the soldiers to go defend themselves. The gunfire stopped. Father Bieberle resumed and finished the Mass.

Was he scared? "Not really," Father Bieberle said. "I tried always to be spiritually prepared. It wasn't a concern of mine."

In time, a new bishop in Kansas decided he needed Father Bieberle in that state. Father Bieberle continued as a reservist and retired as a full colonel in the Army National Guard. After his priestly retirement at the age of 70, he drove to Hot Springs Village, liked it and moved here.

He is optimistic about the Church to which he has given his life, even in retirement.

"In some respects, there is more missionary work than when I was a young priest. I think there's more of that today than in days gone by.

"The fabric of the Church today is suffering, I think because of materialistic values, but there are many good Catholic people in our churches," he said.

As evidence of hope, he said 50 to 75 people attend daily Mass this year at Sacred Heart, and at the holy hour before Mass.

"There are Bible study programs that are very active here and in my day there was less of that," he said.

"There are many good Catholic people all over that are stronger today than in my early days."

Soon enough, the colonel from Kansas will depart Arkansas for a return home. His memory will last long in the people here who knew him as their priest and friend. And their lives will be different because he looked at his retirement as a chance to serve.