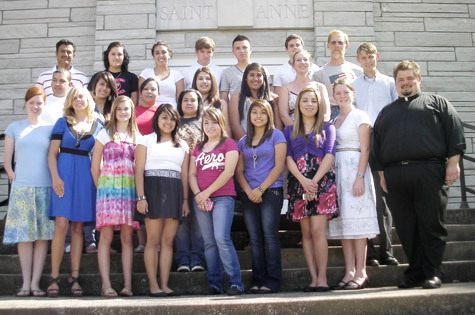 FAYETTEVILLE -- As many as 1 million young Catholics are expected to attend this year's World Youth Day in Madrid, including representatives from at least two Arkansas parishes.

Seven people from St. Joseph Church in Fayetteville left Aug. 8 for the international event. A week later, 27 people from St. Anne Parish in Berryville will depart; after they land, they'll be joined by three other parishioners (including one honeymooning couple). The groups have different travel plans, but all parties are looking forward to the once-in-a-lifetime event, a six-day festival scheduled for Aug. 16-21 that culminates in a Mass celebrated by Pope Benedict XVI.

"It's not every day that you get to go to a papal Mass," said Fayetteville resident Patricia Waldroup, who's accompanying her 16-year-old daughter, Dani. "I wish I could have seen Pope John Paul II before he passed away. I never got that opportunity, and I know we probably won't ever have another chance to see this pope."

Since 1985 when Pope John Paul II initiated the first one, World Youth Day has been celebrated annually at the local level but internationally every three years. The event is open to young people 14 to 30 years old and their chaperones.

One obstacle both groups faced was this year's early school opening date -- Aug. 15 for most districts. Kevin Good, youth ministry director at St. Joseph, said 22 people originally signed up for the trip, but most dropped out because students will miss the first week of school.

Dani Waldroup not only faced missing classes, she also recently won a spot on Fayetteville High School's dance team where daily practices are mandatory, her mother said. But the team sponsor recognized the value of the trip and excused Dani for the first week.

"I told her it's not only the trip of a lifetime but to say you saw a pope and were at a papal Mass with more than 100,000 youths your age is just something you'll never forget. This will stick with you (throughout) your lifetime and seal your Catholic faith, (making it) that much stronger," Patricia Waldroup said.

The Berryville group has been working for a year to raise enough money to go, Connie Doss said. She's not going but her husband, Barry, and daughter, Clare, are going as is her sister-in-law, Eileen Doss. Connie gets a T-shirt for her efforts, she said, laughing.

She's actually been to Europe and attended a Mass celebrated by Pope John Paul II when she was 18. Her daughter will celebrate her 16th birthday while she's in Spain.

Pastor Father Shaun Wesley suggested the trip last year to the religion class of teens he teaches, Connie Doss said, and he'll be leading the group.

The Berryville young people come from communities throughout the area, including Green Forest and Alpena. Each one was supposed to pay half of his or her fare -- about $1,750 -- and fundraising efforts would cover the rest, Connie Doss said. In recent months, the students have held raffles, dinners and breakfasts, and even sold Christmas wreaths. They haven't quite raised enough money although the full costs haven't been finalized, so more fundraising will be required once they return, Doss said. That may be more difficult because several of the students will be in college this fall; but she's confident the amount will be covered.

Her own daughter raised "every dime" of her half by working hard, and all the students were given the opportunity to earn $250 by reading or listening to the Bible or the catechism, up to a maximum of $500 if they read both, Doss said.

The St. Anne group couldn't get a direct flight to Madrid so they're headed to Paris. They'll do side excursions to Toulouse, Lourdes and Montserrat, Doss said. They fly back Aug. 23.

Samantha Richter, a 15-year-old sophomore at Berryville High School, is excited about the stop at Lourdes, where the Blessed Virgin Mary appeared 18 times in 1858 to a young peasant girl who later became a saint.

"I'm really looking forward to going to Lourdes because my patron saint is Bernadette," Richter said.

Her brother, Adam, jumped at the opportunity for the trip.

"Whenever Father Shaun told me that we were going ... to Spain or he said there was a possibility, I jumped out of the pew and said, 'Sign me up.'"

"I thought it would be really exciting to be able to get close to God, to meet other Catholics" and to travel to Spain, Adam Richter said. He's got high hopes of meeting the pope face to face although he acknowledges the odds of that happening are slim.

Still, "I would be very excited if I got to" meet him, Richter said.

A recent graduate of Berryville High School, Adam Richter will begin his college career on the fly. He'll go directly home from the airport, pack his clothes again and drive to Russellville to begin his first day as a freshman at Arkansas Tech University.

The Fayetteville representatives have linked up with the Diocese of Tulsa for a 13-day pilgrimage, Good said. The students originally hoped to raise enough money to cover the $1,800 fare but they fell short so each traveler had to cover a good portion of the expense. (The Berryville fares are higher because the group will be staying in hotels, not homes or hostels.)

As part of the Tulsa group, the St. Joseph participants will take part in Days of the Diocese, a five-day event where they'll experience the Church and the Spanish culture by living and dining with local families.

Patricia Waldroup is looking forward to that part of the trip, too.

An estimated 29,000 U.S. pilgrims and 62 U.S. bishops will be attending the international event.