Changes a time to learn more about the Mass, liturgist says 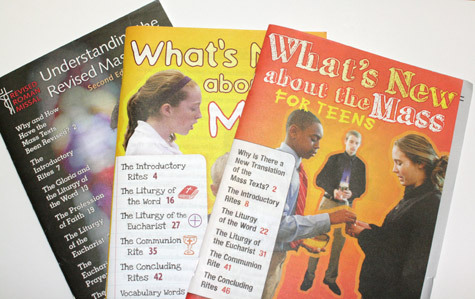 Malea Hargett
A variety of publishers like Liturgical Training Publications are offering parishes booklets for children, teens and adults about changes in Mass texts.

Malea Hargett
A variety of publishers like Liturgical Training Publications are offering parishes booklets for children, teens and adults about changes in Mass texts.

The third edition of the Roman Missal will not be introduced at English-language Masses until Masses Nov. 26-27, but Catholics will begin to see and hear more this fall about what to expect.

Msgr. Richard Oswald, director of the Office of Divine Worship, said priests, principals and deacons were introduced to the changes in the spring and summer. This fall he will be speaking to the directors of religious education. He expects the teachers and catechists to also be getting formation. Pastors and parish staffs will then be offering adult religious education programs in September, October and November about the changes in the Mass prayers.

He is also encouraging parishes to offer written materials and bulletin inserts to the laity before Nov. 27 and supply "pew cards" during Mass after the implementation in Advent. Several Catholic publishers are providing reusable pew cards to guide laypeople on new prayers.

"There is not one specific approach we are recommending," Msgr. Oswald said of informing the laity.

"I hope all parishes have ordered copies of the Third Edition of the Roman Missal," which was formerly called the sacramentary and used by the priest at the altar and presider's chair. The missal contains the instructions for the priest and congregation during Mass.

Msgr. Oswald said the new translation will be an opportunity to learn more about the Mass.

While most prayers for the priests and laity cannot be introduced until the first Sunday in Advent, the people's parts that are sung can be introduced starting this month.

The U.S. bishops decided this summer to allow dioceses to introduce to parishioners the various parts of the new translation that the laity sing. This primarily includes the Gloria, Holy, Holy, Holy and the memorial acclamations.

Msgr. Oswald said it is particularly important to introduce the Gloria before Advent begins because during Advent it is not sung. If the Gloria was not practiced this fall, the first time the people would hear it again would be at Christmas Mass, he said.

Mass prayer changes for Spanish-speaking Catholics will not be introduced yet. Father Richard Hilgartner, associate director of the U.S. bishops' Secretariat on Divine Worship, said the Mexican bishops' conference is still awaiting approval from the Vatican for its translation of the Latin text of the missal. Once the Mexican text is approved, the U.S. bishops might publish a Spanish-language edition based on that translation.

Because most of the changes in the prayers are with the priests' parts, Msgr. Oswald said he is not expecting a lot of problems for those in the pews.

"I think the people will, with a little instruction from their pastor, be open to it and to grow in understanding of it. The main thing about the new translation is it is more faithful to the Latin original. This is not a new missal. This is the same missal that has been with us in Latin since 1975. This is a new translation of that missal. The language will be somewhat more formal, somewhat more elevated. Many people will see it as a more formal prayer language. I hope that will help people to see that what we are doing during the Mass is something very special. When we pray at Mass, maybe it deserves a more formal, more sacred style of language."