Newspaper changes from The Guardian to Arkansas Catholic

Time Capsule 1986-1988A 33-part series on history mined from the first 100 years of Arkansas Catholic and its predecessors. 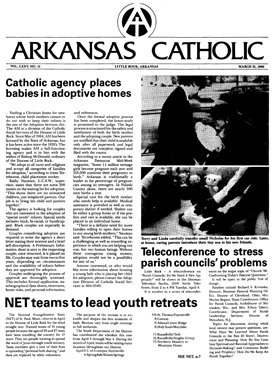 Arkansas Catholic archives
The first issue of the diocesan newspaper under its new name and design is dated March 21, 1986. An additional design update followed in 1988.

Arkansas Catholic archives
The first issue of the diocesan newspaper under its new name and design is dated March 21, 1986. An additional design update followed in 1988.

The diocese also continued to participate in the RENEW program and the Little Rock Scripture Study programs, as a way to deepen and enrich the faith of Catholics in Arkansas.

The diocese also participated in healing services lead by Father Ralph A. DiOrio of the Diocese of Worcester, Mass. in 1986. In the March 7, 1986, issue, the paper reported that "12,000 attend prayer event at coliseum." A similar event in Fort Smith drew 1,500 people to the convention center there. Father DiOrio explained that his gift of healing was from God, and that he was not a faith healer. God uses him as a "conductor of God's loving power."

A new shelter for the homeless, Our House, was set to open in the former Cathedral of St. Andrew Parish Hall during the fall of 1987, the July 17, 1987, issue stated.

The Diocese of Little Rock saw another milestone May 28, 1988, when Warren Harvey of Conway became the first black priest ordained in the diocese.

An earlier article in 1987, stated that the first black man ordained a brother in the United States (May 6, 1937), Brother Vincent Webb, SVD, came from Fordyce.

"Together, let us all have happy memories of the proud history of the diocesan newspaper," Bishop Andrew J. McDonald said.

The next week saw the debut of Arkansas Catholic, with a more modern logo and look to the newspaper.

The first issue was visibly different from the size and design of its predecessor, The Guardian. Bishop McDonald said the name change "speaks to the geography of the whole state."

The paper received some tweaking with a re-design on March 25, 1988, that included a new layout, columnists and news material. The new design celebrated the paper's 77th anniversary.

Pope in Louisiana and Texas

Bishop McDonald led a group to the pope's stop in New Orleans. The group left for New Orleans on Sept. 11 and returned Sept. 13. The cost was $364 for double occupancy.

"It was a wonderful trip. I never thought we would see the pope in person," Edward and Rosemary Hooks of Hazen said in the Sept. 18, 1987, Arkansas Catholic.

The group of 60 Arkansans traveling as a group went to the outdoor Mass celebrated by the pope at the University of New Orleans. The pope met with black Catholic bishops and leaders, as well as youth at the Superdome. A group of 45 also went to see the pope in San Antonio.

Parishioners were active in helping others and working for a better society, including promoting life and social justice issues. Arkansas Catholics continued their support of the right to life for the unborn. A prayer vigil was added to the March for Life in 1986.

The paper reported in 1988 that "Abortion rates for U.S. women among highest in West countries."

The death penalty was an issue that divided many people. In the Jan. 9, 1987, issue, the "Statement by Bishop McDonald definitely opposes death penalty," gave direction to Arkansans.

"In our society of increased violence with its flagrant disrespect for human life and dignity, the Church, more and more, continues to raise her voice against all forms of violence as she seeks to proclaim her consistent life ethic," he said.

Father Louis Franz, CM, who worked in prison ministry out of Star City, said in the May 13, 1988, issue that "prison life must change to better inmates."

Catholics in prison were allowed to receive the blood of Christ during Mass, the paper reported Aug. 12, 1988, in "Communion wine approved to be taken into state prisons."

Social justice issues in the diocese lost a powerful voice when Father Joseph Blitz died of a heart attack in November 1986.

Vocations and the laity

The Diocese of Little Rock and Bishop McDonald were actively planning for a future that looked bleak for priestly vocations, according to an article titled "'Priestless Sunday' plan set."

"But this diocese is preparing for that day when many parishes will not have 'Father' present for Mass on Sunday," wrote Father Albert Schneider, then-director of the permanent diaconate program, in the July, 11, 1986, issue. The prediction at the time, based on current vocations to the priesthood, was that by 2000 the diocese would have only 23 priests. An article on Sept. 19, 1986, reported that the diocese had 26 seminarians.

The March 27, 1987, issue highlighted the fact that women were not allowed to serve in ministries on the altar in "Women may participate in foot-washing."

"The draft document says Church norms excluding women from serving at the altar and from being installed in certain lay ministries 'seem to stand in contradiction to our call for women's more direct involvement in the life of the Church'," it said in the April 22, 1988, issue of Arkansas Catholic.

86 cases of AIDS found in Arkansas

Our Lady of the Ravine still remembered

Msgr. Francis Allen retired after 40 years as pastor at Our Lady of the Holy Souls

Enjoy Holsum bread ... with all the good things baked in!