Time Capsule 1998-2000A 33-part series on history mined from the first 100 years of Arkansas Catholic and its predecessors. 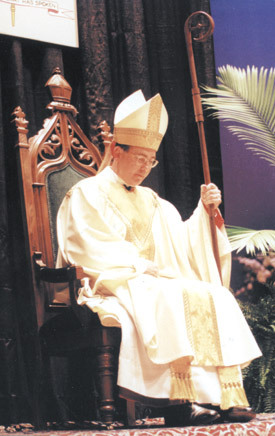 Arkansas Catholic file
Bishop J. Peter Sartain sits for the first time in the cathedra during his ordination Mass March 6, 2000, at Robinson Auditorium.

Arkansas Catholic file
Bishop J. Peter Sartain sits for the first time in the cathedra during his ordination Mass March 6, 2000, at Robinson Auditorium.

The Diocese of Little Rock experienced more transitions in 1998 to 2000.

In 1998 Bishop Andrew J. McDonald celebrated two milestones as a bishop and priest. In May he marked his 50th anniversary as a priest. A special issue of Arkansas Catholic was published to look back at the bishop's ministry in Georgia and Arkansas.

Bishop McDonald also hosted a golden anniversary Mass and reception at the Cathedral of St. Andrew in Little Rock for 14 other men who also graduated from the seminary in 1948. Twelve of the men attended St. Mary Seminary in Baltimore with the bishop.

The bishop also traveled to Georgia for a jubilee celebration.

Then in October 1998, he turned 75 years old, the age required by bishops to submit their resignation to the pope. The 75th birthday celebration Mass was held at the Statehouse Convention Center for about 3,000 people. Among the special guests at the "tribute" were two of his sisters, Cardinal Francis George of Chicago and 44 archbishops and bishops.

Before the celebration, bronze doors on the Cathedral of St. Andrew were installed as a birthday gift from the Catholics across the diocese and a prayer service was held for all the priests, deacons and religious.

Arkansas Catholic published a special 122-page, color magazine to mark the bishop's anniversary and impending retirement. The magazine highlighted several of the areas where Bishop McDonald made his mark, including the transitional diaconate, ecumenism, lay ministry, Hispanic ministry and pro-life issues.

For 11 years the bishop was a fixture at the annual Mass for Life in Little Rock, but in January 1999 he missed the Mass. Two days earlier he had emergency open heart surgery. The bishop returned to his office two months later and presided over Holy Week services.

The Jubilee Year in the Diocese of Little Rock started with big news. Father J. Peter Sartain of Memphis was named the new bishop Jan. 4, 2000. With the announcement of a new bishop, Bishop McDonald's resignation was immediately accepted. He served the state for 27 years.

The ordination and installation of Bishop Sartain took place March 6 at Robinson Auditorium with 2,600 people in attendance. Arkansas Catholic published a 48-page magazine for the occasion. On April 1, the new bishop published his first weekly column in the diocesan newspaper.

Beginning in 1997 the diocese began to host activities in preparation for the millennium and 2,000 years since the birth of Christ. Fifteen churches were declared pilgrimage sites and indulgences were granted to those who visited the sites.

Catholics observed several ways to ring in the new year. Beginning with Christmas eve Mass, jubilee doors were opened at parishes across the state. On Dec. 31, parishes and retreat centers hosted Masses, retreats and concerts.

The diocesan jubilee logo, created by Sister Maria Liebeck, DC, in 1997, evolved over three years to include a heart with a cross, a flame and a hand cradling the heart. For the jubilee, wheat was added to the logo.

While a pope has never visited Arkansas, when Pope John Paul II announced he would visit St. Louis in January 1999 many Arkansans were interested in attending. At least 1,000 people requested tickets from Bishop McDonald.

Because the bishop had open heart surgery, he was unable to make the trip. Msgr. George Tribou was introduced by President Bill Clinton. The pope prayed over the Catholic High School principal, who had three surgeries to remove cancer. In all about 400 Arkansans attended the youth prayer service and Mass.

'One hell of a man, one heaven of a priest': Msgr. James O'Connell celebrates 90 years of life

Vatican repents for lack of action during Jewish Holocaust

No more sterilizations at Doctors Hospital

King a Christian martyr? Vatican compiling list of martyrs to honor May 7