Bishop Anthony B. Taylor chosen for Catholics in Arkansas

Time Capsule 2008-2010The last in the 33-part series on history mined from the first 100 years of Arkansas Catholic and its predecessors. 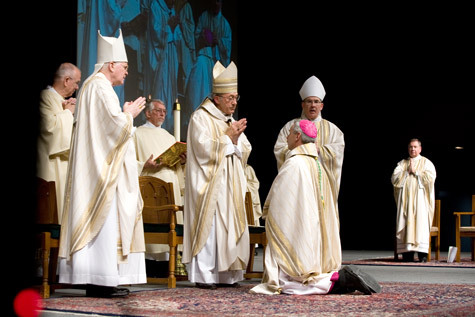 The Diocese of Little Rock gained a new shepherd during 2008 when Father Anthony B. Taylor of Oklahoma City was named bishop for the state.

The diocese saw a policy change the Dec. 5, 2009, issue reported in "Weekday Communion services discontinued." Six parishes were affected by the change, which was necessary to comply with a Vatican document.

Two former bishops of Little Rock celebrated milestones during this time. Retired Bishop Andrew J. McDonald celebrated his 60th anniversary as a priest in Little Rock Sept. 7, 2008. Bishop J. Peter Sartain was installed as Archbishop of Seattle Dec. 1, 2010, where he would lead a "flock of 972,000 people."

"Diaconate formation class, largest ever, is set to begin in August," the paper reported on June 28, 2008. Fifty candidates would be divided into English- and Spanish-speaking classes.

Teens in the state had an opportunity to attend the Region X Catholic Youth Conference, the Nov. 20, 2010, issue reported in "Transform the world: Teens live social justice." The conference brought 1,800 people to Little Rock.

The paper followed preparations for the changes to the Mass during these years. The June 27, 2009, issue reported that "Bishops still grappling with new translations of Order of the Mass." The Feb. 13, 2010, issue stated that "Missal translations to be ready for Advent 2011."

A bishop for Arkansas

Father Taylor was announced as the bishop-elect for the Diocese of Little Rock April 10, Arkansas Catholic reported in the April 19, 2008, issue.

Bishop-elect Taylor, 53, would come to Arkansas from Oklahoma. He was born in Texas, the oldest of seven children and moved to Oklahoma as a child. He was ordained in 1980.

The diocese had been without a bishop since May 2006 when Bishop Sartain was appointed to Joliet, Ill. Msgr. J. Gaston Hebert served as diocesan administrator for nearly two years.

A special four-color, bilingual magazine edition of Arkansas Catholic welcomed "Bishop Anthony B. Taylor: A new shepherd comes to Little Rock." The edition gave a timeline of his life, his ministry and his commitment to the people of God.

He was ordained in front of 3,400 people at the Statehouse Convention Center in Little Rock June 5.

Bishop Taylor released his first pastoral letter, "I Was a Stranger and You Welcomed Me: A Pastoral Letter of the Human Rights of Immigrants," five months after his ordination. Parishes in the diocese held a three-week Advent study of the letter.

From Honduras to Haiti, Arkansas Catholic churches reached out to parishes in other countries, forming bonds with the people there in an effort to improve their lives.

Christ the King Church in Little Rock had organized 11 missions to evangelize, heal and educate the people of Trujillo, Honduras, since 1997. The Aug. 9, 2008, issue reported that for their most recent mission it took 359 days of planning for the six-day mission that included $65,000 worth of medicine, 5,000 toothbrushes and 5,000 tubes of toothpaste, a holy water font, statues, commercial oven for a hospital and school supplies for 10 schools.

Several churches adopted parishes in Haiti and helped offset the overwhelming poverty, and support schools and churches in the region during 2008-2010.

A devastating earthquake Jan. 12, 2010, in Haiti postponed travel plans for two mission groups -- St. Vincent de Paul Haiti Mission Project in Rogers and The Hot Springs Haiti Mission of St. John the Baptist and St. Mary in Hot Springs -- but it did not diminish their willingness to help the people of Haiti, the Jan. 23, 2010, issue said.

The prayers and work of pro-life supporters were answered when the Fayetteville Women's Clinic closed after 38 years of providing abortions. After its closing July 30, 2010, the only surgical abortion provider remained in Little Rock.

The Northwest Arkansas Respect Life Council hosted a Mass "to memorialize over 20,000 babies who died as a result of an abortion at the Fayetteville Women's Clinic.

The work of those who prayed and counseled women outside the Little Rock clinic gained attention after the Dec. 4, 2010, issue ran the story, "Twins saved from abortion after mother sees ultrasound."

Daniella, a 19-year-old living in Brinkley, came to the abortion clinic in west Little Rock on a Saturday in the summer of 2010.

Maria Maldonado counseled Daniella that day, asking her to request an ultrasound before she made a decision and praying for her after she went inside.

"I received three signs that day. The first was Miss Maria; the second was that I was having twins; and the third was that I was due on Christmas. It was meant for me not to do it," Daniella said.

The Little Rock "prayer warriors" adopted Daniella and her unborn twins, throwing her a baby shower. Her twin boys, Taylor and Tyler, were born Dec. 28.

12-year-old: Giving to CASA is ‘the right thing to do'

Theology on Tap brings young adults to discuss their faith