The Greenwood family of Little Rock includes top water skiiers in the country. 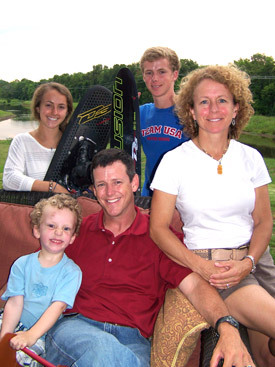 Dwain Hebda
High school students Brittany and Sam Greenwood are following in the footsteps of their parents, Scott and Jane, to be competitive water skiers. Youngest son, Matthew, is likely to follow suit.

Dwain Hebda
High school students Brittany and Sam Greenwood are following in the footsteps of their parents, Scott and Jane, to be competitive water skiers. Youngest son, Matthew, is likely to follow suit.

Lots of families decorate their game rooms with sports memorabilia. Few can say the photos, clippings, magazine covers, autographed national flags, competition posters and other trinkets from around the world hanging on the walls commemorate their own accomplishment in sport.

Not so with the Greenwood family of Little Rock. Covering the walls of their spacious home's game room are photos of Scott and Jane Greenwood and two of their three children, Brittany and Sam, doing what the Greenwood's do better than most people on the planet -- water ski.

In one photo, Brittany slices the surface with her ski, her tanned frame almost parallel to the surface, tow rope in one hand and a plume of water in her wake. In another, she is caught mid-flight during a jump competition where she set a national record of 120 feet, a mark that still stands four years later.

Just as prominent are shots of Sam, blonde hair lightened by the weather to the color of lemonade, in various shots from his many competitions.

Step just a little farther into the recesses of the room and find shots and clips from mom and dad's competitive days, past and present. Both Scott and Jane have been water skiing since they were kids, he growing up in Arkansas and she in Indiana.

Both became good enough to compete at the collegiate level, landing at two of the nation's standout ski schools, she at the University of Louisiana-Lafayette and he at the University of Louisiana at Monroe. They met at a competition and married 19 years ago. Jane converted to Catholicism shortly thereafter and the family attends Christ the King church in Little Rock.

Both spent years competing in USA Water Ski-sanctioned events, racking up titles and records. Practically by the time they could walk, the kids were in the water and up on skis.

"The first time I saw Brittany jump, it was like nothing I had ever seen," Scott said. "She just took to it so naturally."

Like their parents, the two young athletes -- Brittany, a senior at Mount St. Mary and Sam a sophomore at Catholic High School in Little Rock -- move with a grace and assuredness that grows from being towed behind a motorized vehicle at 40 miles per hour and calling it a fun day on the water.

They also both know what it means to sacrifice for their chosen sport. Brittany used to play soccer and basketball, giving up the former when she left Christ the King School to attend high school. Basketball fell by the boards her junior year. Sam dabbled with baseball and football through junior high and is still on the basketball team at Catholic High, though he has made it clear where his athletic loyalties lie, particularly during the skiing season of May through September.

"I told my coach that I would practice as much as I could and as hard as I could, but I also told him that this is something I really wanted to do," he said. "So far it's worked out."

Another thing these two share is the odd duality of being the elite of the field in an area of their life, but an area no one but your closest friends knows anything about.

For Scott and Jane, the activity has wound around and among the members of this gifted family, providing more than a competitive outlet, that being an invaluable bonding and teaching experience.

"We just always encouraged them to have fun with it," Scott said. "We see a lot of people, parents, who forget that and get really mad when their kids don't ski well. Like a lot of sports, this is something that teaches them a lot about life and dealing with people and dealing with disappointment as well as success."

Early on, Scott taught the kids the finer points of water skiing, but for the past number of years, the two have been coached by a professional from Seattle. Now, one of the things the parents are proudest of in their children is how they are reaching out to help other skiers reach their potential, even ones in their own divisions. It's an example of keeping the sport and their values as Catholics in the proper order.

The short-term future of the Greenwood family spells a lot of change. Brittany will be off to college in the fall, following in her father's footsteps to water ski at UL-Monroe.

For now, it's the start of another season and with one of the biggest competitions of the year to boot. Sam and Brittany will compete in the Junior Masters May 30 to June 2 in Pine Mountain, Ga. On Friday, June 1, their rounds will be broadcast live over the internet at http://www.masterswaterski.com. As members of the National Junior Team, comprised of the top 12 skiers in the country, they will also have the chance to compete for spots on international teams this summer.

The federation's competitive divisions go all the way up to 80 years of age, so there's a lot of medals yet to be won by the elders, too. Youngest son, 3-year-old Matthew, isn't far from continuing the family legacy himself.

"It all boils down to having a passion for something," Scott said. "For me, it's the same passion Christ had for us. So when we ski, we glorify him and when we win we get the chance to show who we really are. Winning itself doesn't define you, your actions do."