Kayla Nehus never accepts any such thing as 'can't' 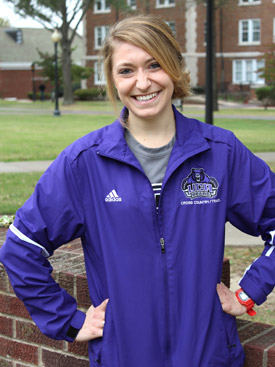 Dwain Hebda
"I've had to say, 'Yes, I'm Catholic and this is what I believe,' and defend it to people who say 'You can't believe that.' Well, that's just someone else telling me that I can't do something. And that just makes me want to go out and prove them wrong." -- Kayla Nehus

Dwain Hebda
"I've had to say, 'Yes, I'm Catholic and this is what I believe,' and defend it to people who say 'You can't believe that.' Well, that's just someone else telling me that I can't do something. And that just makes me want to go out and prove them wrong." -- Kayla Nehus

Kayla Nehus doesn't know the meaning of the word "can't" except for the transformative power that word seems to have when applied to something she wants to do.

Early in her running career, doctors told her that someone with her flat feet can't possibly hope for a successful career as a competitive runner. All that did was drive her to land all-conference and all-state honors for three consecutive years at Mount St. Mary Academy in Little Rock, not to mention four-year scholar athlete honors and being named Most Valuable Athlete as a senior.

The very coach who recruited her to the University of Central Arkansas in Conway, which she chose over other non-Division I suitors, had only modest hopes for the slender, soft-spoken runner, not believing she could play more than a supporting role in the team's fortunes. That is, until the first day of practice when the incoming freshman shot to the top of the varsity team rankings, a position the junior has yet to relinquish.

Recently, she had her first visit with a new academic adviser who looked over her transcript and said, "Your grades are really good ... for an athlete." Such negative stereotypes commonly perpetuated against collegiate athletes in the classroom has driven Nehus to a 3.7 grade point average and scholar athlete awards in both track and cross country as well as a current nomination as UCA's female student athlete of the year.

Even when her own body cried out in protest, sending frantic messages of pain from stress fractures in her shins, from her lungs because of exercise-induced asthma and most recently from a hip condition that has stumped every doctor, trainer and specialist that has looked into it. When her very being says she can't go on -- she runs.

Nehus runs over and around and through all of this, knowing that the biggest naysayer -- that which used to rattle around in the back of her head -- has been beaten before and although it returns to test her resolve, can be conquered again.

"I didn't think I'd be that good at running," she said of her early years in the sport, years prior to the tutelage of high school coaches both at Mount St. Mary and Catholic High School, which gave her a glimpse of where the sport could actually take her.

"My first semester at college, I was in the top three of my team," she said. "That was the first time I thought 'Wow, I can do this.'"

Nehus maintains a strange relationship with the sport that has become such a huge part of her life. She describes it as "great stress relief" yet still nerves up to the point of almost vomiting before every race. Her performance has earned her a more generous scholarship, covering tuition to the school she has little time to experience outside the track and the classroom. The shin fractures of her freshman year were so severe that she nearly wound up in a wheelchair, yet she runs out of fear of letting people who support her down.

"People don't understand the time it takes to be a college athlete," she said. "Everybody says 'Oh, you're so lucky,' but they don't see what goes into it."

Running, she said, is now less of a sport and more of a job. A six-day, 55-mile workweek into which she punches morning and afternoon and to which she commutes from weight room and classroom and library, as she works to improve her kick and complete her undergrad in speech pathology. The only break during the year is Christmas when she returns home to Little Rock, yet even then with workout in hand and running on her mind.

The only time running is still pure is when the gun sounds and brings peace to this driven young woman.

"There have been times when my coach will try to plan out this complicated race strategy, of who to stay close to and who to stay away from," she said. "That's just way too much pressure. I just go out and run as fast as I can and whatever comes out of me comes out."

The only thing more exasperating to a coach than Nehus' mentality of no target time and no overly elaborate race strategy is the success that it yields the 20-year-old product of Our Lady of the Holy Souls Church in Little Rock. As a freshman she posted an indoor mile in 5:13 and recently helped lead her team to its first top two cross country team placement at a major meet in San Antonio, as three UCA Bears ranked in the top 10 individually.

"Our team just recently became Division I and so we are slowly working our way up," she said. "But I don't like to hear people tell me I can't do something. When they say that, it just makes me work harder."

Nehus said she takes a similar approach with her faith. She spends some of what precious little free time she has leading a Bible study group and has also participated in Catholic Campus Ministry. These outlets, as well as the camaraderie and acceptance she has found among her teammates, has helped her through the trying chapters of her athletic journey, though not without their own challenges along the way.

"Running is so tough because it is individual, ultimately it's on you and you have to be responsible for your performance," she said. "It's the same thing with being Catholic. Sometimes you have to stand alone and I have. I've had to say, 'Yes, I'm Catholic and this is what I believe,' and defend it to people who say 'You can't believe that.'"

She paused, then smiled. "Well, that's just someone else telling me that I can't do something. And that just makes me want to go out and prove them wrong."