In work or health, Annette Tracy knows God has a plan 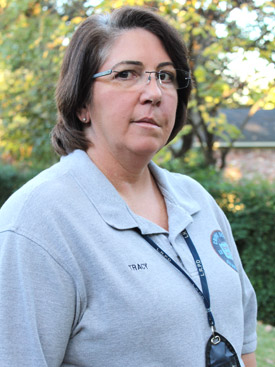 Dwain Hebda
Little Rock CSI Annette Tracy, a native of California, deals with the trauma of her job and the pitfalls of life through faith in God's plan.

Dwain Hebda
Little Rock CSI Annette Tracy, a native of California, deals with the trauma of her job and the pitfalls of life through faith in God's plan.

Parish: Our Lady of the Holy Souls, Little Rock

Why you want to know Annette: For the past 18 years, Annette has seen the cruelty of which humanity is capable as a crime scene specialist with the Little Rock Police Department and before that as a member of the California Highway Patrol. But regardless of what the day brings, she views all she encounters through the lens of her faith, carrying out her official duties with the compassion and respect all Catholics are called to show their fellow man.

Arkansas Catholic's theme this year is "Catholic Beyond Sunday." How do you remain committed as a Catholic beyond Sunday?
It's definitely something I draw on in my work. What I do and the things I see and the things I come across, it helps knowing that even though it is tragic that someone has died, I know they are now in a better place. It helps to get me through the job.

How did you make the transition from being an officer on the street to crime scene investigation?
My husband and I met when we were both working for the California Highway Patrol. He's from Arkansas and so we moved back here, and I got a job as a dispatcher. We wanted to start a family and so I didn't want to go back to being a cop. I chose this instead.

Millions of fans want to know -- is there anything about the CSI television shows that even approach reality?
Believe it or not, everything they show is technically possible. That is, of course, if you had unlimited funding and everything was collected and preserved and processed under ideal conditions, which rarely happens. But technically, all that stuff is possible.

You mentioned how your faith helps you get through doing what you do sometimes. Has your faith ever been tested by seeing what you see on the job, wondering how God can let this happen to someone?
There's a certain level of detachment that you have to have. You are there to do a job and the best thing that you can do for someone is help get the person who did this to them. Evidence is evidence, and you only get one shot at getting it right and so you have to work the best you can. But yeah, it's hard to be detached when the victim is a child or someone you know or especially another police officer. You still get mad sometimes. But I'm too much of an optimist not to believe there's a plan.

I'll give you an example. When I went out on maternity leave with Morgan, I felt a lump in my neck that turned out to be salivary gland cancer. I had it removed and had radiation treatment and I was out for four months but you know what I got? I got four months at home with this beautiful new baby.

Now, this September I got a call and my cancer was back. In October, we (went back in to) get it. Well, OK, God has a plan here too and just because I can't see it and may not know why this happened, I truly believe he has a reason for everything.