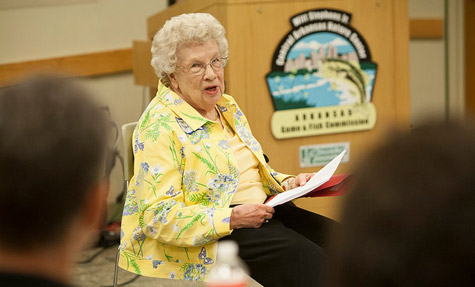 Charlotte Schexnayder shares memories of her more than half-century career in journalism with members of Arkansas Press Women at a meeting June 16 in Little Rock.

Charlotte Schexnayder shares memories of her more than half-century career in journalism with members of Arkansas Press Women at a meeting June 16 in Little Rock.

One has just about their pick of hyperbole to describe Charlotte Schexnayder of Dumas, the charming but steely former newspaper editor and state lawmaker, though many have already been taken -- groundbreaking, resolute, principled, unbreakable, crusading and even, "an Arkansas institution."

"She's a treasure," former President Bill Clinton once said. "I'm so grateful I've had the chance to ... be her friend."

Earlier this year, she released a lifetime of what she calls, "anecdotes, activities and the progress of a small town," in her memoir, "Salty Old Editor, An Adventure in Ink". It is a title she regards with particular fondness.

"That was my husband, Melvin's moniker for me," she said. "I was never a fence-sitter. I'd get upset about something and sit down to write the hottest editorial and he'd say, 'There goes the Salty Old Editor.'"

"Salty Old Editor" recounts the life and ink-stained times of the Schexnayders as seen through Charlotte's eyes. At its core, it's the story of a love affair -- not only two people's love for each other, but also for their vocation in life, the people in it and the place they were led to live it. As Charlotte writes, "Tiny towns can launch diverse and fulfilling careers such as mine. The seed for the dream was planted in my childhood."

"I had an English assignment in the seventh grade to create a newspaper. I still have it," she said.

By the time Charlotte graduated from Louisiana State University in 1944, she was an old hand at journalism, having served summer jobs at the McGehee Semi-Weekly Times and editing her college paper, the Reveille. To say she was a rebel was not only apropos, but something of a family trait. Her grandfather, Jewell Stephen Tillar, fought for the Confederacy in the Civil War, was captured and held as a prisoner of war near Chicago. That he walked, barefoot, back to Arkansas upon his release says something of Charlotte's familial gist.

Following midnight Mass 1945, Melvin, freshly home from the European battlefields of World War II, produced a diamond ring and a proposal which Charlotte readily accepted. A couple of years into married life, Charlotte's old boss W.M. Jackson, then-owner of the McGehee Semi-Weekly Times, made them an offer to join the staff. Melvin, the newspaper greenhorn, suggested they give the business a year's try; it turned out to be a career that spanned a half-century.

In 1954 the duo bought the Dumas Clarion where Melvin handled much of the business side and Charlotte was editor-in-chief. At the time, the business wasn't much to look at, but the Clarion would go on to win more than 500 state and national awards for journalism excellence.

Charlotte would continue to break ground by ascending to the presidency of various Arkansas and national press associations, sometimes as the first woman to hold the office. In the 1980s, she also sat on the Arkansas Catholic newspaper board.

"My mother thought I could do anything and she told me so," she said. "She set a marvelous example."

With that endorsement ever-fresh in her ears -- and the needs of the region getting what she considered short shrift by the state legislature -- Charlotte ran unopposed for the Arkansas House of Representatives in 1984. She was about to enter a new realm alongside those whom she had pilloried on the editorial page and therefore hers was not a hero's welcome when the gavel fell on her first legislative session in 1985.

"As a newspaper editor, I was treated with obvious wariness," she wrote. One fellow legislator, Rep. Geno Mazzanti of Lake Village, went even farther telling her to "just sit and listen."

"You obviously don't know me very well," she famously replied.

Her 14 years in politics mirrored her time in newspapering -- direct, plainspoken and focused on the people who sent her as their voice, many of whom couldn't speak for themselves. Two of her proudest accomplishments were the creation of the Office of Rural Advocacy and the Great River Bridge connecting southeast Arkansas to Mississippi.

As adventuresome as her public and professional lives were, her home life was a model of constancy. She and Melvin were a true partnership whether dividing duties at the newspaper, raising three children or in their spiritual life at Holy Child of Jesus Church where they worked in various lay ministries.

Of the periods of grief she describes in the book, two -- the sale of the Dumas Clarion in 1998 and Melvin's death in 2007 -- are especially poignant. Of the former she writes, "I cried for weeks after the sale,"; of the latter, she wrote in the dedication, "To Melvin, ever the great love of my life."

Soon to be 89, Charlotte said the most rewarding thing about writing the book was how it has inspired connections with people with whom she had lost touch. She is far from content -- another book possibility nags the back of her mind -- but she is happy. At least until the next know-nothing talks down about the people and place she knows to be Real America.

"It always tees me off when people want to downgrade the people of the Delta or the region in general. That really gets me," she said. "They are warm and wonderful people and I will always rise to the defense of the Delta."