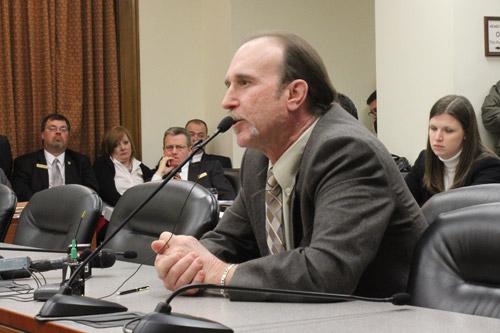 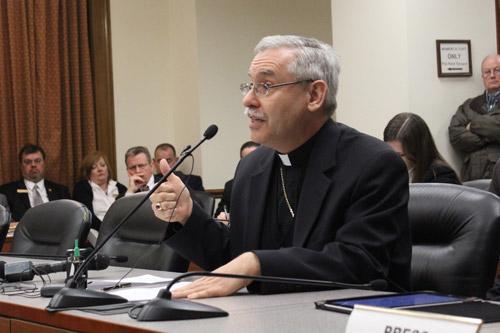 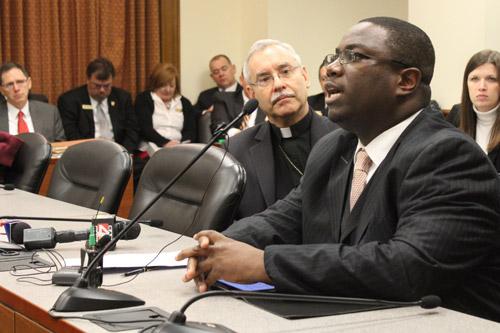 Executions halted in state since 2005, but there are still 37 inmates on death row 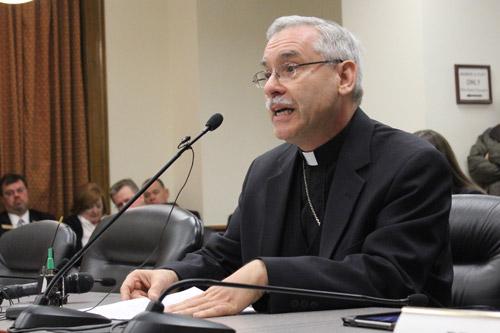 Dwain Hebda
Bishop Anthony B. Taylor testifies for the abolition of the death penalty Jan. 30. Bishop Taylor delivered his remarks to the Arkansas Senate Judiciary Committee before a packed gallery.

Dwain Hebda
Bishop Anthony B. Taylor testifies for the abolition of the death penalty Jan. 30. Bishop Taylor delivered his remarks to the Arkansas Senate Judiciary Committee before a packed gallery.

Bishop Anthony B. Taylor was among several experts giving testimony against the death penalty at an Arkansas Senate Judiciary Committee meeting Jan. 30.

“We think of premeditated killing as being even worse than crimes of passion,” said Bishop Taylor in his prepared remarks. “When the state kills, it is premeditated and cold-blooded.”

Currently 37 inmates sit on Arkansas’ death row, but no executions have been carried out since the state Supreme Court struck down the capital punishment statute in 2012. The last execution in Arkansas took place in 2005.

In the 2012 decision, the high court ruled the measure, as written, gives too much latitude to the Department of Correction. The state legislature must now amend the statute before executions can resume, or abolish capital punishment altogether.

The hearing was not held in the face of any such bill, but was, in the words of Judiciary Committee chairman Sen. Jeremy Hutchinson of Benton, “appropriate … before we discuss the methodology of executions, that we discuss the humaneness of the death penalty itself.”

In all, six abolitionists’ testimony was heard in the one-hour time limit imposed by the chairman. Two relatives of murder victims spoke in favor of capital punishment in Arkansas.

Bishop Taylor told lawmakers and a packed house of onlookers and media of his “unique perspective” on the subject of the death penalty, having served as a priest in the wake of the 1995 bombing of the federal building in Oklahoma City. He said despite the profound and sustained sadness felt in the community at that time, the subsequent execution of bombing mastermind Timothy McVeigh was as counter productive as it was immoral.

“It made (McVeigh) something of a hero to some anti-government, white-supremacist groups to the point that for several years we had to live with heightened security every April 19 for fear of copy-cat bombers,” he said. “Far from making us safer, his execution exposed us to greater danger because violence begets more violence.”

Bishop Taylor also told of accompanying convicted killer Eric Patton to the Oklahoma death chamber. He said the state’s measures against Patton were no less heinous than those suffered by his victim, just because they were in the strictest technical sense, legal.

“Whenever people said they supported the death penalty, I had them speak with Peggy Patton, his mother and an active parishioner,” Bishop Taylor said. “Once they experienced the toll it takes on innocent members of even the perpetrator’s family, they usually changed their mind.

“So I have experienced the death penalty from the side of innocent victims and the side of criminals executed, and what is violated in both cases is the sanctity of life: either by the criminal or by the state.”

Among the others speaking for abolition of the death penalty were college professors and legal minds, who testified on the increased cost of capital cases, given the years of appeals and studies that show capital punishment does not deter violent crime.

The gallery was riveted to the testimony of Ray Krone, a Tennessee anti-death penalty activist who was twice convicted for the 1991 murder of a Phoenix bartender. Krone spent a decade on death row in Arizona before DNA evidence finally exonerated him, the 100th death row inmate to be found not guilty due to new evidence.

“Now there’s 142 exonerations in our country,” he said. “One hundred and forty-two men and women who were sent to death row like me, who had moms and sisters and brothers, who had media coverage calling us monsters.”

As yet, no legislator has introduced a bill to abolish the death penalty in Arkansas; however, Gov. Mike Beebe is on record as saying he would sign such a bill into law should one reach his desk. Beebe said earlier this year that the reality of signing inmates’ death warrant changed his stance on the issue of capital punishment.