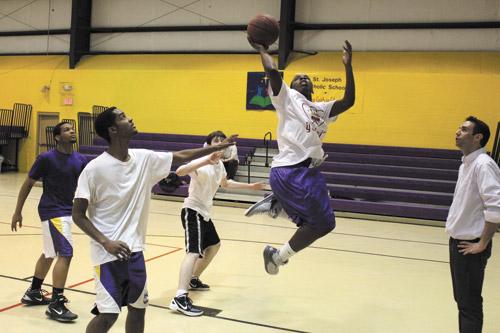 Dwain Hebda
Stephen Reed drives to the bucket during practice as Coach Mathew Foss (far right) looks on. Reed joined the team after Christmas break and helped lead the gritty, underdog squad to the state tournament.

Dwain Hebda
Stephen Reed drives to the bucket during practice as Coach Mathew Foss (far right) looks on. Reed joined the team after Christmas break and helped lead the gritty, underdog squad to the state tournament.

PINE BLUFF — It’s the last practice of the season for the St. Joseph Huskies and no one’s running faster than coach Mathew Foss.

Before his players even break a sweat, he has a stray jersey to locate, he’ll discover one player inexplicably in the library instead of warming up, there are notes awaiting him in the school office and an Arkansas Catholic reporter just walked through the door.

Oh, and interim grades just posted with a couple of players dancing on the razor’s edge of eligibility on this, the eve of the state high school tournament. But the 29-year-old doesn’t even blink. Compared to what he’s seen at the tiny Pine Bluff school, this could just as well be his day off.

“God puts everything together,” he said.

Even by ecclesiastical standards, the tale of trial and redemption here is nothing short of astonishing. In fact, Foss, who three years ago was a Hollywood screenwriter developing reality TV projects, couldn’t have sold a tale as far-fetched as that of his odds-and-ends basketball team.

“God bless these kids,” he said, “even if they aren’t as athletic, they try really, really hard.”

The desire of the squad — all eight of them — is emblazoned for all to see. The fact they are here at all tells you that. Two years ago, St. Joseph was as close to a high school basketball title — the Huskies took second in the state tournament  — as it was to extinction. Declining enrollment almost put the school out of business in 2012, saved only by Bishop Anthony B. Taylor’s last-minute decision to grant it a “grace year” following a surge in fundraising.

Even so, uncertainty over the school’s future meant many of the best athletes off the state runner-up squad moved to other schools. Foss, who had never been to Arkansas prior to answering an ad to coach and teach drama, was about to live both during the toughest year of his life.

“It was something right out of ‘The Mighty Ducks,’” Foss remembers. “We just started throwing jerseys on kids.”

Even having downshifted from the Arkansas Activities Association to the Arkansas Association of Christian Schools, St. Joseph was still the smallest squad to take the floor most nights. Players as young as seventh grade routinely played up just to field a varsity team and that was after playing a full junior varsity game.

By contrast, some opponents’ benches ran 15 players deep — or, roughly one-third of the entire St. Joseph student body — meaning most foes didn’t have to strategize much against the Huskies.

“I’d never seen anything like it,” Foss said. “They’d just send in five fresh players at a time. It looked like a hockey game.”

The 2011-2012 stats were horrifying. The team didn’t win a game and lost one by 60 points. Parents accused Foss to his face of doing psychological harm to his players allowing them to endure such beatings. Even as he tried to explain he was doing his best, Foss wasn’t completely convinced they were wrong.

“It began to take an emotional toll on me,” he said. “I felt bad sending those kids out there to get beaten like that.”

Yet even as the losses piled up toward 20 in a row, something seemed to be growing out of the wreckage. The team began holding their own, losing by narrower margins and even pushed some contests to overtime. When academic issues threatened to end the season, players helped each other with homework and this carried over to the court.

Foss, meanwhile, didn’t miss an opportunity to parallel the lessons of life, faith and basketball.

“I told them that Christ on the cross was our example,” he said. “I told them that if you look at a crucifix it looks like game over, but through faith, we know what looks like defeat is really victory. As players they had to decide how they were going to resurrect from these defeats and gain something from them.”

Ironically, after everything he’d overcome to preserve the program, it was Foss himself who nearly doomed the 2012-2013 Huskies. Over the summer he received a letter congratulating his acceptance to the prestigious Florida State University film school.

“Two thousand apply, six get in and I’m one of them,” he said. “I was holding the golden ticket. I mean, who turns that down?”

He paused. “I couldn’t stop thinking about this school.”

Foss stayed, and the only thing that surprised the student body more was when the team won one of its first games of the year, in overtime.

“Suddenly, we weren’t the chumps people said we were,” Foss said. “The team was like, ‘Oh, so this is what a win feels like.’”

Opponents expecting pushovers got pushed back and the Huskies had modest success through the first half of the season. Over Christmas break, a transfer student provided a missing spark and the squad went on a late season tear ultimately qualifying for the AACS state tournament.

Though the squad lost its opening round contest Feb. 14 to Christian Ministries of Hot Springs, 52-36, an infectious school spirit has been fostered through the team’s success. However, the future of St. Joseph School remains uncertain, last year’s reprieve notwithstanding. Foss makes sure his players, who organized their own fundraiser to help stave off the school’s closing last year, keep that in mind.

“Last year it was all about ‘Save Our School,’ and we stayed open by the grace of God,” he said. “Now — and I say it to our kids a lot — every game we win gives our school hope for the future.”