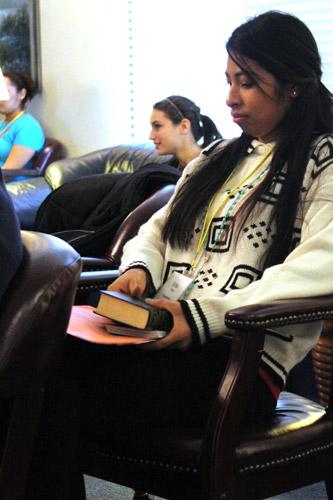 Dwain Hebda
Young women attending the diocese’s women’s discernment retreat in January had a rare opportunity to meet sisters from several religious orders, explore their ministries and share the experience with other discerners.

Dwain Hebda
Young women attending the diocese’s women’s discernment retreat in January had a rare opportunity to meet sisters from several religious orders, explore their ministries and share the experience with other discerners.

While the Diocese of Little Rock has performed admirably in the area of helping young men discern a vocation to the priesthood, challenges remain helping more young women enter religious life.

“It’s a complicated thing,” he said. “With diocesan priests, it’s relatively easy to say, ‘This is what we need, this is what we do and these are charisms we’re looking for.’ For women, religious life isn’t as clearly defined.”

Discernment is not a snap decision to begin with, even with the best guidance. For women, the process is complicated from the outset by a lack of role models and support because of the disappearance of nuns from most of the state’s Catholic schools. Unlike priests who have at least a weekly presence in a young person’s life — potentially more through Catholic youth activities and parochial school settings — a female could conceivably go through her entire elementary, middle school and high school years without encountering a nun on a regular basis.

From there, young women face the additional challenges of exploring the many individual religious orders, trying to find the one that lives the kind of ministry to which the discerner wants devote her life. Religious orders’ missions range from missionary work to education, health care and advocacy and service to the poor and can also vary widely in terms of location. Cloistered nuns may never leave the grounds or a sister’s vocation could take her across the country or around the world.

According to Father Erik Pohlmeier, assistant director of vocations and pastor of Our Lady of the Holy Souls Church in Little Rock, the range of variables can be intimidating.

“There’s no such thing as a diocesan sisterhood,” Father Pohlmeier said. “Every order has their own calling and a young woman really can’t decide until she knows what each is all about. That means it’s a lot more work.”

Fortunately, Arkansas’ women of faith are stepping in to help the next generation discover what Christ’s plan may have in store for them.

Well-received women’s discernment retreats were organized by Sister Joan Pytlik, DC, minister for religious, and the Office of Youth and Campus Ministries in January 2012 and 2013, which featured representatives from orders in Arkansas giving attendees a glimpse into the different daily lives led by women religious.

A new group, called Little Flowers, grew out of those retreats, formed to continue the effort on a monthly basis of giving young women a hands-on view of life in vocations.

Little Flowers is the brainchild of University of Central Arkansas students Christy Fili and Juliane Pierini. The idea grew out of the duo’s own struggle with the challenges of discernment and the desire for a group to support that effort. Little Flowers meets monthly and includes a visit to an Arkansas religious order where group members meet the sisters and complete service work consistent with the ministry of that order.

“Women religious really aren’t as visible here in Arkansas,” Pierini said. “As a young woman, if I hear the call to religious life, I really don’t know what to do about it.”

Fili said Little Flowers aims to duplicate for the benefit of young women the camaraderie diocesan seminarians enjoy. She said the opportunity for peer-to-peer support and frank conversations about life, faith and vocations are essential to helping grow the number of women religious in Arkansas.

“I have friends who are seminarians and I see how they are part of a diocesan family,” she said. “When you’re a girl, you’re on your own to find that family. I want this group to provide a community where us girls can get real with each other about what we’re going through.”

SEE MORE PHOTOS related to this story at Arkansas Catholic's Zenfolio page, and order prints if you like. You also can browse other photos taken by Arkansas Catholic photographers.
Click for the Open Your Hearts in Welcome index