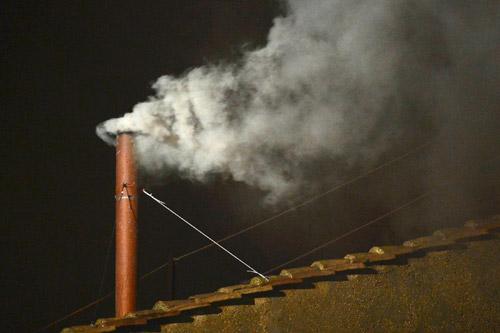 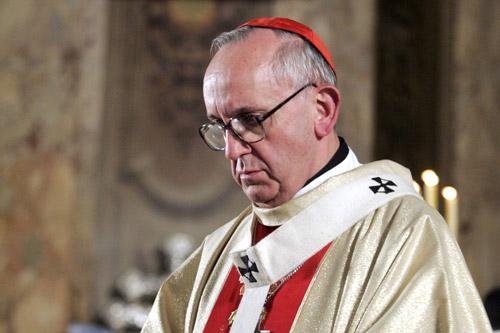 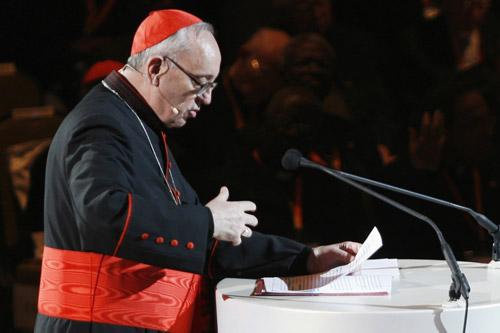 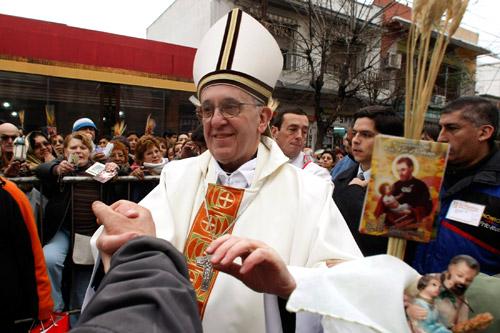 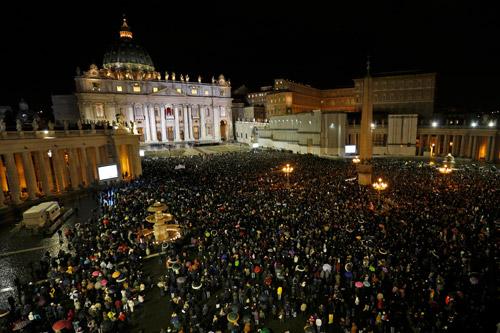 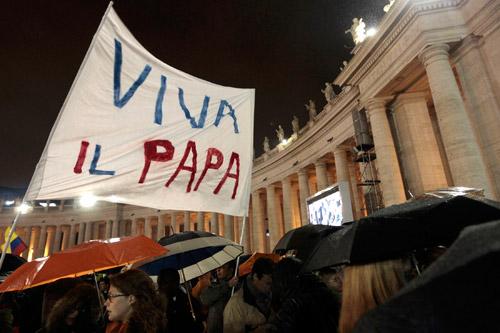 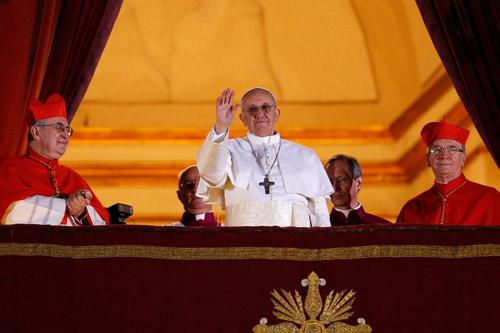 For a closer look at the new pontiff, please click here.

The election March 13 came on the second day of the conclave, on the conclave's fifth ballot. It was a surprisingly quick conclusion to a conclave that began with many plausible candidates and no clear favorite.

The new pope was chosen by at least two-thirds of the 115 cardinals from 48 countries, who cast their ballots in secret in the Sistine Chapel.

His election was announced in Latin from the balcony of St. Peter's Basilica, to a massive crowd under the rain in the square below and millions watching around the world.

White smoke poured from the Sistine Chapel chimney at 7:05 p.m., signaling that the cardinals had chosen a successor to retired Pope Benedict XVI. Two minutes later, the bells of St. Peter's Basilica began pealing continuously to confirm the election.

At 8:12, French Cardinal Jean-Louis Tauran, the senior cardinal in the order of deacons, appeared at the basilica balcony and read out in Latin: "I announce to you a great joy: We have a pope! The most eminent and most reverend lord, Lord Jorge Mario, Cardinal of the Holy Roman Church, Bergoglio, who has taken for himself the name Francis."

The crowd in the square responded with cheers, applause and the waving of rain-soaked national flags.

Ten minutes the later the new pope appeared. He sought prayers for Pope Benedict and spoke of the journey the church was about to begin.

"Now I would like to give my blessing. But first, I will ask a favor. Before the bishop blesses his people, he asks that you pray to the Lord to bless me, the prayer of the people for the blessing of their bishop. Let's pray for me in silence," he said.

Celsa Negrini, an older woman from Rome, said the new pope's choice of name was "beautiful. Francis is the patron of Italy. It's a humble choice, a choice of one who will reach out to the poor."

Jesuit Father Federico Lombardi told reporters it was "beautiful that a Latin American was chosen."

"I don't know him well, even though we are part of same religious family," he said "I greeted him the other day, but didn't expect to see him again dressed in white."

A respected Italian journal said Pope Francis I had the second-highest number of votes on each of the four ballots in the 2005 conclave.

Pope Francis has had a growing reputation as a very spiritual man with a talent for pastoral leadership serving in a region with the largest number of the world's Catholics.

Since 1998, he has been archbishop of Buenos Aires, where his style is low-key and close to the people.

He rides the bus, visits the poor, lives in a simple apartment and cooks his own meals. To many in Buenos Aires, he is known simply as "Father Jorge."

He also has created new parishes, restructured the administrative offices, led pro-life initiatives and started new pastoral programs, such as a commission for divorcees. He co-presided over the 2001 Synod of Bishops and was elected to the synod council, so he is well-known to the world's bishops.

The pope has also written books on spirituality and meditation and has been outspoken against abortion and same-sex marriages.

In 2010, when Argentina became the first Latin American country to legalize same-sex marriage, Pope Francis encouraged clergy across the country to tell Catholics to protest against the legislation because, if enacted, it could "seriously injure the family."

He also said adoption by same-sex couples would result in "depriving (children) of the human growth that God wanted them given by a father and a mother."

In 2006, he criticized an Argentine proposal to legalize abortion under certain circumstances as part of a wide-ranging legal reform. He accused the government of lacking respect for the values held by the majority of Argentines and of trying to convince the Catholic Church "to waver in our defense of the dignity of the person."

His role often forced him to speak publicly about the economic, social and political problems facing his country. His homilies and speeches are filled with references to the fact that all people are brothers and sisters and that the church and the country need to do what they can to make sure that everyone feels welcome, respected and cared for.

While not overtly political, Pope Francis has not tried to hide the political and social impact of the Gospel message, particularly in a country still recovering from a serious economic crisis.

After becoming archbishop of Buenos Aires in 1998, he created new parishes, restructured the administrative offices, taken personal care of the seminary and started new pastoral projects, such as the commission for divorcees. He mediated in almost all social or political conflicts in the city; recently ordained priests have been described as "the Bergoglio generation"; and no political or social figure missed requesting a private encounter with him.

Buenos Aires, but later decided to become a Jesuit priest and studied at the Jesuit seminary of Villa Devoto. The last pope to have belonged to a religious order was Pope Gregory XVI, a Benedictine elected in 1831.

He studied liberal arts in Santiago, Chile, and in 1960 earned a degree in philosophy from the Catholic University of Buenos Aires. Between 1964 and 1965 he was a teacher of literature and psychology at Inmaculada high school in the province of Santa Fe, and in 1966 he taught the same courses at the prestigious Colegio del Salvador in Buenos Aires.

In 1967, he returned to his theological studies and was ordained a priest Dec. 13, 1969. After his perpetual profession as a Jesuit in 1973, he became master of novices at the Seminary of Villa Barilari in San Miguel. Later that same year, he was elected superior of the Jesuit province of Argentina.

In 1980, he returned to San Miguel as a teacher at the Jesuit school, a job rarely taken by a former provincial superior. In May 1992 he was appointed auxiliary bishop of Buenos Aires. He was one of three auxiliaries and he kept a low profile, spending most of his time caring for the Catholic university, counseling priests and preaching and hearing confessions.

Some controversy had arisen over the position taken by Pope Francis during Argentina's 1976-1983 military dictatorship, which cracked down brutally on political opponents. Estimates of the number of people killed and forcibly disappeared during those years range from about 13,000 to more than 30,000.

Citing a case in which two young priests were detained by the military regime, critics say that the cardinal, who was Jesuit provincial at the time, did not do enough to support church workers against the military dictatorship.

Others, however, have said that he attempted to negotiate behind the scenes for the priests' release, and a spokesman for the cardinal, quoted in the daily newspaper La Nacion, called the accusation "old slander."

Contributing to this story were Carol Zimmermann and Carol Glatz in Rome.

For a closer look at the new pontiff, please click here.

For Bishop Anthony B. Taylor's reaction to the election of Pope Francis, please click here.

For reaction to Pope Francis' election from the head of the U.S. bishops, please click here.