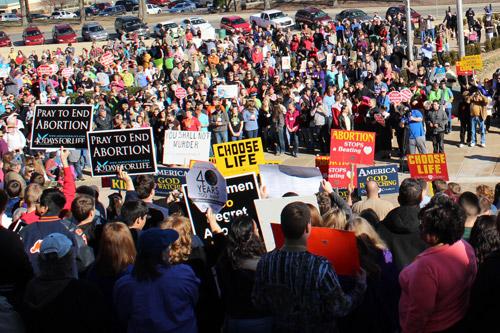 Malea Hargett
Thousands of pro-life demonstrators march in silence to the east steps of the Arkansas state capitol in the March for Life Jan. 20.

Malea Hargett
Thousands of pro-life demonstrators march in silence to the east steps of the Arkansas state capitol in the March for Life Jan. 20.

Six days after passing a ban on abortions after 20 weeks’ gestation, the Arkansas Legislature approved an even stricter ban.

The House of Representatives and Senate voted March 5 and 6 to override Gov. Mike Beebe’s veto to approve the Arkansas Human Heartbeat Protection Act, just as they did Feb. 27-28 to override his veto of the Pain-Capable Unborn Child Protection Act.

While the fetal pain bill went into effect immediately, the heartbeat bill will take effect this summer. Pro-choice supporters have vowed to file lawsuits to stop the 12-week law from taking effect.

The Arkansas Human Heartbeat Protection Act bans most abortions after a heartbeat is detected and is 12 weeks’ gestation or greater. According to the National Right to Life, a fetus’ heartbeat begins at the 22nd day.

Exceptions are made for rape, incest, to save the life of the mother or if a “highly lethal fetal disorder” is discovered. It has been called the strictest abortion law in the country.

After the vote, sponsor Sen. Jason Rapert said, “If there’s a heartbeat, there’s life and we’re going to stand up for this law, regardless of who opposes it.”

The Diocese of Little Rock’s position on laws that restrict abortion is grounded in the Catholic Church’s teaching that all life is sacred from the moment of conception to natural death.

“The passage of these two bills provides greater protection for unborn children,” Marianne Linane, diocesan respect life director, said. “Legal challenges are to be expected and if they are filed, we hope the eventual rulings will recognize that an unborn child is a human life and extend the protection of the law to unborn children at an even earlier age than previously provided.”

Rose Mimms, director of Arkansas Right to Life and a member of St. Theresa Church in Little Rock, said the heartbeat bill is groundbreaking and will be challenged in court since Arkansas is the first state to pass such a restrictive law. Mimms’ organization was lobbying for the fetal pain bill since there was precedence in other states and was not actively lobbying for the heartbeat bill. Mimms was familiar with the heartbeat bill because a similar version was introduced in the legislature in 2011 but didn’t make it out of committee.

“We support any kind of pro-life legislation, but we didn’t feel the timing was right,” she said. “Our concern is because it does go so far that if it did go all the way to the Supreme Court it might just be another decision that affirms Roe (vs. Wade). That is not what we want. We want more decisions that give us more restrictions under the Roe framework. That is what we got with partial-birth abortion decision a few years ago, and we are looking for more decisions like that. That is why we feel the pain capable (law) has more of a chance to get a good ruling so we can keep whittling away at Roe until we can get rid of it completely.”

Other pro-life supporters didn’t express legal concern over the bill.

Millie Lace, founder of Concepts of Truth, a pregnancy center in Wynne, and member of St. Peter Church in Wynne, had an abortion when she was 25 years old.

“The legislation will not only protect the unborn but will protect women from the mental anguish and trauma of an elective abortion,” she said.

Father Frank Pavone, national director of Priests for Life, said, “The Arkansas Legislature has done the right thing. Governors aren’t governing their people if they aren’t protecting them. One of the most striking and effective statements over the years by the pro-life movement has been ‘Abortion stops a beating heart.’  It’s still true, and it’s about time the law starts catching up with that fact.”