Despite ‘year of grace,’ St. Joseph School will close

After 20 years Pine Bluff school to close doors May 24; last graduation to be May 10 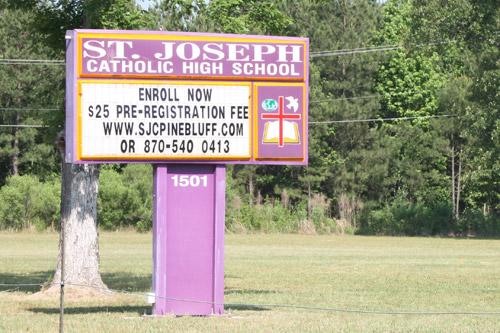 Six Catholic schools have closed and two schools have merged in the Diocese of Little Rock in the past eight years.

After 175 years, Catholic school education will no longer be available in Jefferson County.

On March 27 superintendent Vernell Bowen and principal Alexandra Pritchett announced to the staff, parents and parishioners that St. Joseph School in Pine Bluff will close at the end of May because of low enrollment and financial difficulties.

Bishop Anthony B. Taylor gave the school a “year of grace” in May 2012 to remain open for the 2012-2013 school year and study the feasibility of keeping the school open. Enrollment had dropped more than 50 percent since 2006 to only 44 students today in fifth to 12th grades.

Pre-registration for the fall only garnered 42 students, short of its goal of 60 students.

St. Joseph Church could not subsidize the school and demographic and financial studies of Jefferson County revealed that increased enrollment was not likely in the future. Only 12 percent — or five students — were Catholic.

To earn that “year of grace” the community rallied together to raise $38,505 in the Save St. Joseph campaign and the school used another $160,000 in reserves to operate the school this year. It was estimated that the school needed at least 100 students to make it financially viable. With a minimum of 60 students, the school would operate at a deficit of $144,000 for the 2013-2014 school year if it reopened, Bowen said.

Bowen had been given managerial oversight over the school in May 2012 to hire new staff, work with the school board and conduct a feasibility study. Pritchett, a former Mount St. Mary Academy administrator, was hired in July as principal to oversee the day-to-day operations of the school.

“It’s been a great year educationally and spiritually for those kids,” Bowen said.

Bowen said Pritchett and the staff did everything they could to recruit and retain students. They hosted fundraisers, participated in community events and even bought radio commercials to encourage registration.

Bowen personally met with Chamber of Commerce and Pine Bluff Educational Endowment leaders and other community officials to promote the school and seek their advice. In a unique arrangement, Pine Bluff Educational Endowment bought the land and built the school in 2000 and asked St. Joseph Church to operate a high school on the property. St. Joseph School leases the building from PBEE.

Pritchett said she approached her year at St. Joseph with optimism.

“To me nothing is impossible with God,” she said. “We knew going into this. Our theme for the year is ‘Voyage of Faith.’ Going into it we didn’t know what the outcome would be. We didn’t know what God’s plan was. We were going to do what we needed to do, which was provide quality education with our Catholic tradition …  Just because the doors are closed doesn’t mean the voyage is over.”

“The teachers, students and staff are a small, close-knit family,” she said. “That is why it is so sad about what is going one. We are so close. We are so sad that we have to pull apart from each other.”

Seven seniors will graduate during a ceremony at St. Joseph Church May 10. The last day of school is May 24.

Catholic education in Pine Bluff and the surrounding area goes back to 1838. The Sisters of Loretto opened the first Catholic school in the state at St. Mary Church in Plum Bayou but closed in 1845. In 1889 the Colored Industrial Institute was opened and later renamed St. Peter High School. The school closed in 1975 but reopened in 1985 as a predominantly black elementary school.

St. Raphael Church near Pine Bluff also operated a predominantly black school but it closed in 1960.

Annunciation Academy was open from 1880 to 1975 at St. Joseph Church. St. Joseph Church reopened a junior high school in 1993 to serve seventh, eighth and ninth graders. The PBEE approached the church about expanding its school to 12th grade.

Low enrollment caused St. Peter School, an elementary school, to close in May 2012. It was the last black Catholic school in the state.

Bowen said she is very concerned for the students who will have only one other middle school and high school choice for private school in Jefferson County. Ridgeway Christian School is operated by the Pine Bluff First Assembly of God.

“The parents won’t have a choice to get a quality academic education and it’s going to be detrimental to the area. Those choices are not there,” she said.

With the announcement in March that St. Raphael School in Springdale would also close, the future of Catholic schools has come to the forefront again.

“With the exception of St. Raphael, all the others had to do with demographic changes in the area,” Bowen said. “Also, the inability of the parishes to help subsidize it. … The future of Catholic schools depends on the ability of parents to pay tuition and the parishes to continue to subsidize.”

Six Catholic schools have closed and two schools have merged in the Diocese of Little Rock in the past eight years.